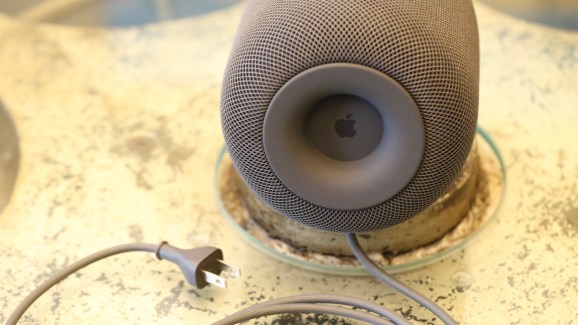 If tepid reviews for Apple’s new HomePod smart speaker weren’t bad enough, the company has a new issue to deal with: furniture damage. Two publications have found that the HomePod can leave persistent white rings on some wooden furniture, a problem apparently traceable to interactions between the speaker’s silicone base and treated wood. An Apple spokesperson has confirmed the issue and suggsted a partial remedy.

According to Pocket-Lint, 20 minutes of HomePod use on a “solid oak kitchen worktop treated with Danish oil” was enough to cause a white ring-shaped discoloration that has faded somewhat over time but not disappeared. The New York Times‘ Wirecutter similarly reported a “defined white ring in the surface” of an oiled butcher-block countertop and a wooden side table, pointing to a Twitter post suggesting similar problems.

#homepod left rings on my wood furniture in less than 20 minutes of use. Thanks #apple I am glad a paid $400 to make perfect etched circles on my more expensive furniture. Guess I can not move it now to cover up the mark. Evil geniuses you are. #applesupport pic.twitter.com/u47xImwQQt

Apple confirmed the issue to Wirecutter, saying that “the marks can improve over several days after the speaker is removed from the wood surface.” If they don’t disappear, Apple suggests to “try cleaning the surface with the manufacturer’s suggested oiling method.” It’s unclear at this point whether the issue is limited to oiled wood surfaces or whether the interaction between the speaker and surface will also damage the HomePod’s rubber base.

Pocket-Lint mentioned that wax finishes might also be affected: “When questioned, Apple told us it was ‘not unusual’ for a speaker with a silicone base to leave a ‘mild mark’ when placed on certain oil or wax based wood finished surfaces, suggesting the marks are caused by oils diffusing between the silicone base and the table surface.”

The marking issue manifested within days of HomePod’s release, despite a reported six years of development time and special testing in everything from Apple employee homes to soundproofed chambers. HomePod notably includes an upward-firing woofer that may be rubbing the center of the base into greater contact with the surface below with each pulse of low-frequency music. The white ring interestingly appears on wood even when the HomePod is space gray with a gray rubber base.

Updated at 12:42 p.m. Pacific, February 14: Apple has released a support document for the HomePod called Cleaning and taking care of HomePod, including the following details:

It is not unusual for any speaker with a vibration-dampening silicone base to leave mild marks when placed on some wooden surfaces. The marks can be caused by oils diffusing between the silicone base and the table surface, and will often go away after several days when the speaker is removed from the wooden surface. If not, wiping the surface gently with a soft damp or dry cloth may remove the marks. If marks persist, clean the surface with the furniture manufacturer’s recommended cleaning process. If you’re concerned about this, we recommend placing your HomePod on a different surface.

The document also provides tips such as keeping HomePod away from abrasives, solvents, flames, and liquids — all of which are closer to common sense than the idea of avoiding wooden surfaces.

Updated at 8:33 a.m. Pacific, February 15: As noted by 9to5Mac, a reviewer at Tom’s Guide discovered today that the HomePod’s biggest competitor Sonos One can also leave marks on oiled or waxed wood, albeit much smaller and non-contiguous ones. Commonly suggested fixes include using coasters or pieces of paper between the speakers and wood surfaces, removing the speakers from wood tables, or returning the speakers pending redesigned bottom pads.