As planned, Google Chrome will start blocking ads on February 15. The company today shared more details on how this feature will work when it’s turned on tomorrow.

Google last year joined the Coalition for Better Ads, a group that offers specific standards for how the industry should improve ads for consumers. The company then revealed that Chrome will stop showing all ads (including those owned or served by Google) on websites that display non-compliant ads, as defined by the coalition.

“It’s important to note that some sites affected by this change may also contain Google ads,” Chrome vice president Rahul Roy-Chowdhury emphasized again yesterday. “To us, your experience on the web is a higher priority than the money that these annoying ads may generate — even for us.”

Filtering on the network level

As we noted last year, the February 15 date is not tied to a specific Chrome version (Chrome 64 launched on January 24 and Chrome 65 is slated for an early March launch), leading us to guess at the time that Chrome’s ad blocker was server-side. Google today confirmed that this is indeed the case:

At a technical level, when a Chrome user navigates to a page, Chrome’s ad filter first checks if that page belongs to a site that fails the Better Ads Standards. If so, network requests on the page — such as those for JavaScript or images — are checked against a list of known ad-related URL patterns. If there is a match, Chrome will block the request, preventing the ad from displaying on the page. This set of patterns is based on the public EasyList filter rules and includes patterns matching many ad providers, including Google’s own ad platforms, AdSense, and DoubleClick.

That said, the feature still requires Chrome 64 or higher, a Google spokesperson confirmed to VentureBeat. Still, this means Google will be able to make updates to Chrome’s ad filter separately from Chrome itself. And Chrome’s ad filter will work on mobile: 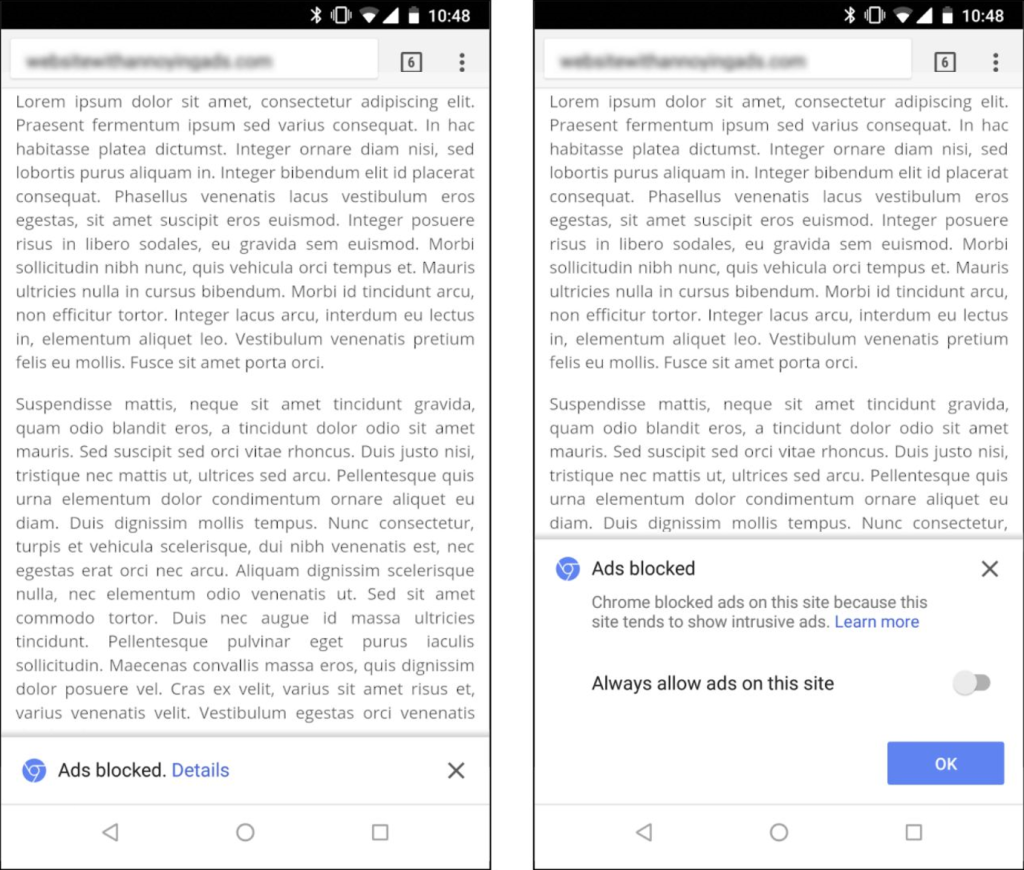 “At this time, this feature is available on Android, Windows, Mac, Linux, and Chrome OS,” the Google spokesperson confirmed. The company did not comment on when Chrome’s ad filter would come to iOS.

Chrome on desktop and mobile will automatically block all ads on sites that fail the Better Ads Standards. Google’s browser will show the user a message indicating that ad blocking has occurred, as well as an option to disable the setting by selecting “allow ads on this site.”

Google’s strategy is simple: Use Chrome to cut off ad revenue from websites that serve non-compliant ads. A single ad violating the standards will not be enough, however, to block all ads on a site. Chrome will follow non-compliance thresholds set by the coalition:

Put another way, 1 in every 40 pageviews is allowed to have a non-compliant ad and a site will still get all its expected ad revenue from Chrome users. The coalition is well aware that all sorts of ads can make it onto a site, despite rules dictated to ad networks, header bidding solutions, and other partners. The coalition appears to be leaving some room for error so as not to punish sites that are genuinely trying to serve compliant ads.

For a full list of ads to use instead, Google offers a best practices guide.

The Coalition for Better Ads came up with the Better Ads Standards after asking over 40,000 internet users in North America and Europe to evaluate common ad experiences on their intrusiveness. Because the worst offenders can be controlled by the site owner, Google decided to take a four-step approach to fighting non-compliant ads via Chrome:

Getting from step one to step four might seem like a slippery slope, but sites will be regularly evaluated based on a sampling of pages. Depending on how many Better Ads Standards violations are found, the site will be given a passing, warning, or failing grade.

Making sure your site is compliant

Google claims that its ultimate goal is “not to filter any ads at all but to improve the experience for all web users.” The company noted that as of February 12, 42 percent of sites that were previously “failing” the Better Ads Standards have since resolved their issues and are now “passing.”

Put another way, in an ideal world, Chrome’s ad blocker would not have any work to do. Indeed, the company insists that it is looking forward to “continued collaboration with the industry toward a future where Chrome’s ad filtering technology will not be needed.”

Google has noted in the past that ad blockers hurt publishers (like VentureBeat) that create free content and threaten “the sustainability of the web ecosystem.” Despite the fact that Google makes the vast majority of its revenue from ads, the company sees its selective ad blocker as the natural evolution of pop-up blockers.

“We’ve already seen more and more people express their discontent with annoying ads by installing ad blockers, but blocking all ads can hurt sites or advertisers who aren’t doing anything disruptive,” Roy-Chowdhury noted. “By focusing on filtering out disruptive ad experiences, we can help keep the entire ecosystem of the web healthy, and give people a significantly better user experience than they have today.”

Chrome’s built-in ad blocker, or ad filter as Google wants to call it, could one day reduce the usage of other third-party ad blockers that block all ads outright. But we’re only at the very beginning of the Chrome ad blocker story, the evolution of which the web will be watching very closely.