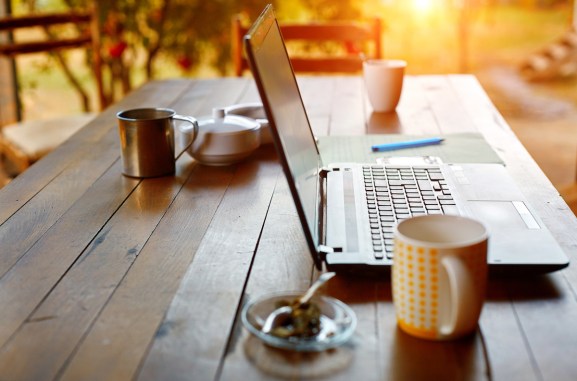 Two years ago at Davos, the world’s economic and political elite gathered to focus on “disflationary pressures.” But populist, anti-immigrant uprisings in Europe and Donald Trump’s election changed the conversation quickly: Struggling with disinflation, or weak price growth, was out. Understanding populism, migration, and automation were in.

This year at Davos, those themes remained. However, aided by a new World Economic Forum (WEF) research report called “Eight Futures of Work: Scenarios and Their Implications,” there was a shift from predicting a fear of inevitable, automated doom and gloom to planning for potential positive futures of work.

That should give the Heartland hope.

To be sure, the Midwest is beholden to geography in a world where it still matters a lot. The shifting economy has gutted its towns and stunted its growth.

But the growth of the knowledge economy and the technology to enable remote work offer Middle America — and all fractured pieces of our global economy — a chance to transcend the problem of place and, by doing so, move beyond current uncertainty toward a more prosperous future.

Geography, the most overlooked variable

Yes, we have lightning-fast software tools that you’d think would render place irrelevant. In some ways, it has; but in a lot of others, geography still matters.

Case in point: the Midwest.

While families living in every other region of the country have seen their real incomes rise since 2000, the average Midwest family in 2016 made roughly 86 percent of what it made 16 years before.

Those are the employed. The poor in in industrial Midwest towns aren’t just worse off than their fellow Midwesterners, they’re worse off than other poor people in America, says the WEF, which finds they live shorter lives. No wonder many in the Midwest fear what the next decades of “progress” will bring.

Its pain also raises the pressing question: What do we do about it?

America has a long history of trying to make a place — using transportation and housing policies to engineer an economy where there was none, or to restart a dead one.

That history actually begins with George Washington and the Heartland. Washington “contemplated a canal that would connect the Potomac River to the Ohio River valley and the western states,” according to a report from the National Bureau of Economic Research.

But debt killed off George Washington’s “great waterway to the west” in the 1820s, before it was ever finished, and the report warns that his failed attempt to open the Midwest’s farms to the mid-Atlantic is a valuable lesson for the next 200 years of American place-making.

Evaluating a range of experiments such as the Tennessee Valley Authority and the Appalachian Regional Commission, the economists who author the report conclude, “Most large-scale place-oriented policies have had little discernible impact.”

What will determine the future of work

If the results of past place-making experiments are ambiguous, it certainly makes sense to stop repeating the same approaches.

Building more canals, bridges, highways, tunnels, etc. might have sufficed as infrastructure in pre-industrial and industrial eras. However, “Eight Futures of Work” highlights why prosperity in the 21st century economy requires additional infrastructure that will hopefully lead to different, more positive results.

The report examines possible future job markets, based on combinations of three factors:

Technology, the report says, could render ever-larger segments of the population skill-less and effectively unemployable — or create large pools of migrants in search of jobs. Alternatively, new barriers to migration and restrictive immigration policies, while temporarily insulating a low-skilled labor force, could sap economic growth and have significant ripple effects on other countries’ labor markets and internal politics.

The report admits the future is highly unpredictable. There is no silver bullet, and the possibilities outlined therein are a fraction of the possible permutations. But the role of human capital, and its transformation as part of the Fourth Industrial Revolution, is the best hedge we have to build towards positive outcomes.

“The extent to which the working population … acquires the right skills to carry out the tasks required of them in the workplace is one of the most impactful and uncertain variables for the future of work,” the report states.

The focus on human capital isn’t misplaced; however, I would argue that we must be equally as focused on overcoming the geographical determinants of success and prosperity. After all, what’s the value of a skilled workforce if businesses can’t reach them?

Freeing the workforce from place

In 2017, 57.3 million Americans freelanced. That’s the highest number ever. According to the study “Freelancing in America” — a joint report from Upwork and the Freelancers Union — the freelance workforce grew approximately three times faster than the overall U.S. workforce between 2014 and 2017. By 2027, based on current growth rates, the study predicts the majority of the U.S. workforce will be freelancers.

The ascent of the knowledge economy helps explain why: Creating intangible products can be done from anywhere.

The 2017 “Future Workforce Report” found that only one in 10 hiring managers believe physical presence in an office is important to a new hire’s success. The report also found that 60 percent of hiring managers anticipate using freelancers more in the future. The growing numbers of workers unshackled from an office — whether freelancers or remote employees (aka telecommuters) — has also made them an increasingly important part of their local economies. According to “Freelancing in America,” U.S. workers earned approximately $1.4 trillion from freelancing last year.

Freelancers can live anywhere — but they don’t. They’re not equally distributed across the country. For example, the Midwest has a disproportionately lower percentage of them.

It’s not just freelancers. According to a January report, the region’s states are among those with the lowest percentage of full-time telecommuters, who like freelancers can work remotely but are employees.

In a Harvard Business Review article this month, economists James Manyika and Michael Spence write, “We should take another look at making the labor market more fluid, including by more active use of digital technologies for job matching and for stimulating the rise of independent work.”

Instead of losing more of their populations to coastal urban enclaves, state and local governments in the Midwest can reverse the trend by incentivizing large companies to hire remote workers in their locale. That means smart, targeted tax incentives. That means building coworking spaces that allow workers in places like the Midwest to meet in a nearby office when it’s required. And, of course, it means investing in training workers with new digital skills. Large companies should also make it a priority to source talent from areas like the Midwest — not because it’s the right thing to do to help our economy, but because it gives them access to a broader pool of quality talent.

All we know for certain is that the future of work will bring major change to our society. We can choose to lead that transformation, placing calculated bets on how we educate, motivate, and locate our workforce. Or we can be transformed by passively continuing down our current path.

Stephane Kasriel is the chief executive of Upwork, a global freelancing website, where he built and led a distributed team of more than 300 engineers located around the world as SVP of engineering before becoming CEO. He holds an MBA from INSEAD, an MSc in computer science from Stanford, and a BS from École Polytechnique in France.