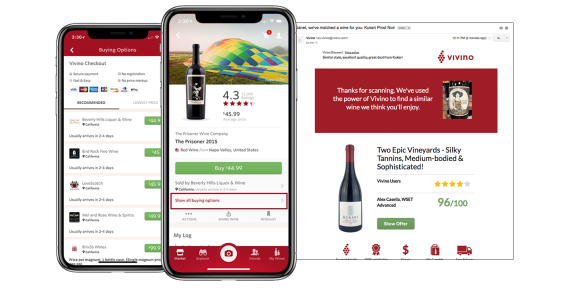 While Vivino has been known for its wine discovery service for a while, the company is now being transformed by its wine marketplace, whose rapid growth has helped it attract a new $20 million round of funding.

“We are on a mission to enable all of our users to discover and easily purchase any wine available on the market,” Vivino founder and CEO Heini Zachariassen said in a statement.

The latest funding comes about two years after the company raised $25 million in a round led by SCP Neptune International, the investment arm of former Moet Hennessy CEO Christophe Navarre. The new round was again led by SCP Neptune International and brings Vivino to a total of $57 million raised. Other VCs participating in the new round include Balderton Capital, Creandum, SEED Capital Denmark, and Iconical.

Founded in Denmark in 2010, Vivino now lists its headquarters as San Francisco. Its app allows people to track wines they’ve tried, scan labels, and rate and comment on the wine. Vivino then uses those reviews to build profiles and recommend wines to users.

Over the past two years, Vivino has seen its user base grow from 13 million to 29 million. As part of that growth, the company last year launched a wine marketplace that allowed users to purchase many of the wines for delivery via its platform.

The company says it now offers more than 130,000 wines for purchase and that its marketplace sales have increased by four times since the launch.

Vivino plans to use the new investment capital to further develop its service and expand its team. It also hopes to launch soon in Hong Kong and is betting it can reach $1 billion in wine sales by 2020.