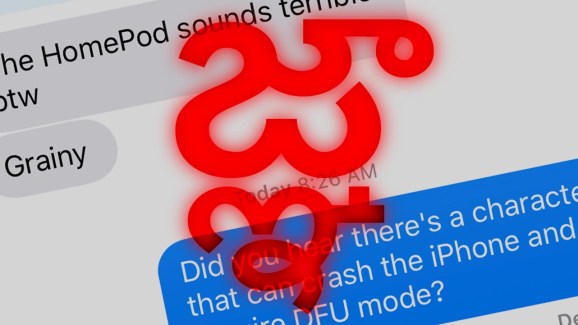 Sending a specific Indian character in a text message can crash an iOS device’s Messages app and potentially require the device to be restored from a backup, Italy’s Mobile World reports. The bug follows last month’s device-freezing ChaiOS issue, which Apple rushed to patch in iOS 11.2.5, but has more serious potential to damage the data on your device. Backing up your iPhone or iPad right now might be a good idea.

The triggering character comes from the Telugu language, spoken by roughly 70 million people in India, and is shown (safely) in the image above. According to the report, if the text version of the character is either received in a message or pasted into a text field, applications can freeze or iOS as a whole can crash. Attempts to restart the application will fail.

Worse yet, if the character appears in a notification, iOS’s Home screen — known to developers as Springboard — will crash. Should that happen, Mobile World suggests waiting and hoping for Springboard to restart properly, because rebooting the device will force a bootloop, requiring initiation of DFU mode and a reinstallation of iOS. At that point, having a recent backup ready will help you avoid losing data.

The issue is said to impact certain apps running on the latest final versions of iOS, macOS, and watchOS, though only iOS appears to suffer from the bootloop issue described above. Mobile World notes that the beta version of iOS 11.3 appears to have remedied the issue.

Once deemed safe and secure, Apple’s operating systems have recently hit a rough patch as surprisingly small vulnerabilities have proved capable of causing serious crashes or handing full control over to hackers. Apple typically rushes out patches to address potentially viral crash-causing bugs, but the company has not yet commented on this one.

Updated at 12:35 p.m. Pacific: Apple has confirmed that it will fix the issue in an update to iOS 11.2.5 prior to the public release of 11.3, as well as similar updates for its other platforms.