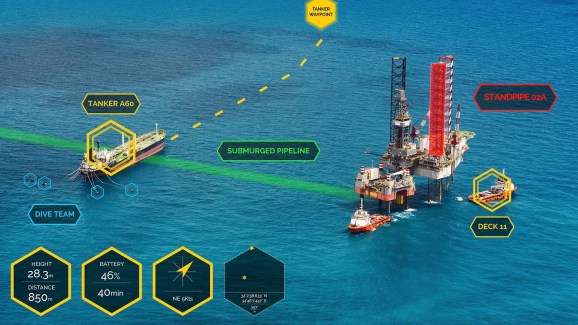 Augmented reality and drones. It sounds like a match made in entertainment heaven, but one company is using the combination of drone technology and AR to help save lives.

Today, Edgybees — whose technology enables augmented reality (AR) on high-speed platforms such as drones and cars — has announced a seed round of $5.5 million to expand its operations.

Edgybees technology was initially applied to AR drone racing and was released in partnership with DJI in early 2017. Later that year, Edgybees released First Response, a drone-flying app that emergency responders use to orient themselves in confusing environments and to better track rapidly evolving circumstances.

I saw Edgybees in action during a recent visit to Jerusalem for the OurCrowd Summit. During the demonstration — a simulation of an emergency response situation — a first responder arrived by motorcycle and deployed a DJI drone. The software overlays live drone camera footage with Google Maps data to pinpoint exactly where the emergency is taking place.

Those coordinates can then be sent to responders. Edgybees can also deploy volunteers on foot, motorcycle, bicycle, or via other modes of transport to reach places inaccessible to cars, fire engines, and ambulances.

The drone flying app was first used in the Florida Keys in the aftermath of Hurricane Irma, when officials used map overlays to identify distress calls in flooded areas. First Response was most recently used by local authorities to keep fire fighters out of harm’s way during the Northern California fires last October.

“Public safety is a market with hundreds of buyers backed with billions of dollars of budgets — in fact, one of the investors is Motorola, which is an $18 billion company focused on public safety,” Edgybees cofounder and CEO Adam Kaplan told me. “There are many fire, police, and other agencies going to DJI to purchase tens of thousands of drones because they are seeing a major change in the efficacy of their missions with aerial footage. We are taking what is possible and multiplying its value with AR overlays, and we’re already seeing our first users value this at a sale price that makes this a very large market.”

The company does not see itself as a drone-based business, however.

“We are first and foremost a technology company and intend to foster an ecosystem of application developers who want to bring AR to other verticals,” Kaplan said. “This includes multiple commercial and end customers in the defense world, broadcasting, oil and gas, automotive OEMs and suppliers, as well as gaming studios.”