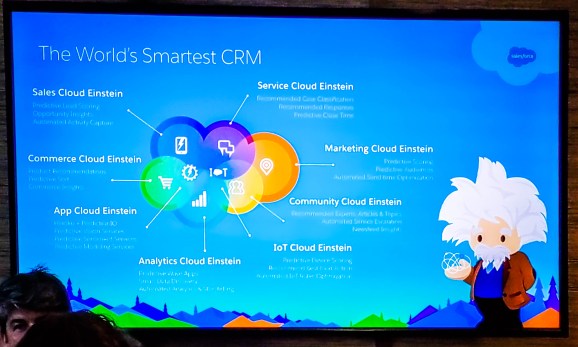 Salesforce announced today that the company is now delivering more than 1 billion AI-driven predictions to its customers every day. Those predictions are powered by the company’s Einstein-branded capabilities, which include sales and service forecasting.

It’s a major milestone for both Salesforce and Einstein, showing the potential of artificial intelligence’s interaction with business users and the appetite for intelligent predictions based on business data. Salesforce launched the platform in the fall of 2016 with a great deal of fanfare from CEO Marc Benioff. Since then, the company has been building on its AI offerings.

What’s not clear from this announcement is how distributed these predictions are across Salesforce’s user base. A spokesperson for the company refused to answer questions about how many customers are using Einstein, or roughly how broadly it’s being used. Einstein features can cost extra to implement above a company’s existing subscription to Salesforce’s software-as-a-service offerings, which can stymie adoption.

Even without that clarity, this is good news for Salesforce as it vies with a host of other companies to dominate the business software market. AI fever has gripped the field of enterprise SaaS, with companies like Microsoft, Oracle, and SAP all touting their own AI capabilities, with varying degrees of maturity. To compete, Salesforce unveiled a series of major improvements at its Dreamforce conference last year, such as the ability to create custom predictions.