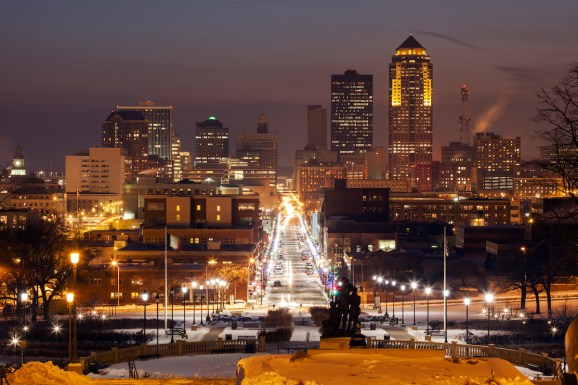 With Tuesday’s release of the 2018 Best States Ranking that places Iowa as the top state in the nation based on factors like broadband access, education, opportunity, and quality of life, the discussion has turned to how to utilize the state’s resources to build density and develop startup centers.

Day one of Silicon Prairie News’ Heartland Innovation Road Trip took a crew of Nebraska founders and startup leaders to Gravitate, where they met with Iowa startup ecosystem members from Des Moines, Ames, and Cedar Rapids.

The founders, community organizers, and economic development representatives met for a 90-minute round table discussion on Iowa’s individual communities and the state as a whole, covering where they are now and where they came from.

Cataloging the ecosystems to create focus

Geoff Wood, founder of workplace community Gravitate, has been a long-time supporter of Des Moines’ startup scene. He said that when he moved to the city in 2009, there were a lot of people with entrepreneurial ideas, but the network wasn’t well-organized.

Wood brought the Silicon Prairie News to Des Moines and said the presence of the publication helped by starting a catalog of the ecosystem. Around that time, a couple of big changes to the city generated some much-needed hype.

“Dwolla became the first Silicon Valley-esque startup to happen to Des Moines that raised big money and had New York Times and TechCrunch articles written about them. That helped raise visibility,” said Wood. “I think Startup City (an incubator) was the first galvanizing thing that our leadership got their arms around.”

He explained that the interest and early groundwork led to a two-industry focus on insurance, with the launch of the Global Insurance Accelerator, and agriculture, with the AgTech Accelerator.

“Those seem like natural things for our community, going forward, but we do have people all across the board doing all sorts of things now,” said Wood. “They just aren’t as visible as those two.”

Tackling the issue of density

David Tominsky, managing director of the Iowa Startup Accelerator, said Cedar Rapids seemed to be good at one thing that other communities are still working on.

“What was hard for other communities was easy for Cedar Rapids — getting the government and the startup community to the same table,” said Tominsky.

However, Cedar Rapids is still stuggling when it comes to density.

“In a smaller town like Cedar Rapids, how do you get enough people to really move this thing forward?” asked Tominsky. “There are people that want to [participate], but we’re talking numbers in the hundreds, and we need to be in the thousands.”

Woods thinks that the issue of density could be improved upon if communities saw themselves as linked, rather than isolated.

Brian Hemesath, managing director of the Global Insurance Accelerator, thinks that connectivity is only one piece of the equation

“I’d stack on top of density the word connectivity,” said Hemesath. “I know when it’s time for a connection; it’s easy to make those. We’re all working on our own projects, but we know where the handoffs are. Introductions are easy to make in Des Moines.”

A matter of perspective

Andrew Kirpalani, cofounder and CTO of Des Moines’ WorkHound, thinks that everyone is leveraging their individual skills wisely, but he feels communities may lack perspective in terms of what their ecosystems really are.

“I think the thing we’re really bad at is understanding the reality of our situation,” said Kirpalani. “I think some entrepreneurs and support networks are very much thinking ‘everything is exactly the same here’ [as it is on the coasts].”

He thinks the mentality in Des Moines is that the city has all the same opportunities and resources as the coasts, which simply isn’t the case.

“If you’re starting a business with ‘zero’ being a mud hole in the ground and 10 being Silicon Valley, everything has to fall somewhere on that spectrum,” said Kirpalani. “If you’re an insurance company, it might be an eight, and if you’re an ag company it might be a 10. If you’re a consumer gaming company, it’s probably a three or four.”

Gregory Bailey, CEO and founder of Denim, has only lived in Des Moines for four years, but he’s built a personal community within the broader community. He thinks those micro-communities people build for themselves can in turn build connectivity across the city.

“I have a list of who I want to meet with every six months, who I meet with every quarter,” he said, “then my employees and my team, I meet with every week, one on one.” Bailey talked about the importance of “being purposeful and intentional” when it comes to creating community and cultivating talent, and added that “we need to recruit more talent to Iowa.”