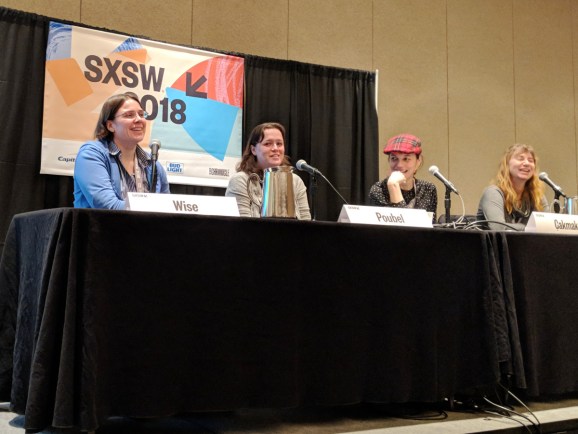 Debate surrounding the lack of diversity in tech has led people to point fingers in a lot of directions. Some say the educational pipeline is the culprit. Others cite racism, sexism, or deeply embedded negative cultural practices. Melonee Wise, CEO of warehouse robot company Fetch Robotics, says a big part of the problem is that some people are just assholes.

“Women tend to leave engineering because they don’t want to deal with assholes,” Wise said. “Actually, at Fetch Robotics, we have a strong no-asshole policy because engineering douchebaggery is actually the biggest thing to hurt engineering since the dawn of time, and this isn’t just particular to women who leave the field, it’s actually particular to all people who have no tolerance for working with assholes and douchebags.”

Part of the issue, Wise said, is that engineering culture tends to exclude people.

“We, as a society, have created an archetype that to become an engineer, you have to be the smartest person in the room. And if you’re not the smartest person in the room, you need not apply. I think that’s one of the biggest barriers we have to break down. And we need to translate what people think of as engineering from ‘You have to be good at X’ to ‘You need to be capable of dreaming and being creative and thinking big.’”

Wise shared her remarks as part of a panel titled “Women in Robotics: A Fine Balance” at SXSW in Austin, Texas on Monday. She was joined by Open Robotics software engineer Louise Poubel, University of Washington assistant professor and Human-Centered Robotics Lab director Maya Cakmak, and University of Southern California professor and Robotics and Autonomous Systems Center director Maja Mataric.

Though the panel addressed things like the pink plastic Legos marketed at little girls and the gains diverse points of view can bring to robotics, the conversation teetered between what’s necessary to address the lack of diversity in robotics and how to overcome a general shortage in the number of qualified engineers.

The panel agreed that both issues are holding back the robotics field, but Wise believes it’s more important to tackle the overall shortage than to focus on addressing gender or ethnic diversity disparities.

“If you forgo the idea that there aren’t enough women in engineering, the bigger problem is there aren’t enough people in engineering,” she said. “It’s not to say that I don’t think we need to solve the diversity problem, but with the engineering deficit that we have already, I don’t think we should be solving or optimizing for that problem yet. I think we need to first optimize for the large lack of creativity and of people who should be engineers.”

One thing that can be done to address this shortage and increase diversity in robotics, the group agreed, was to allow more people from outside the U.S. to work here.

Three of the four panelists were born outside the U.S., including Open Robotics software engineer Louise Poubel, who’s from Brazil. She said she’s been told she lost job opportunities because she’s a woman, but her nationality has also been an obstacle.

“There’s one thing that has kept me back and kept opportunities away from me, and that’s my passport. And that’s something I don’t think society is ready to talk about seriously […]. It’s much harder to talk about how we have to have more foreigners or we have to give everybody a chance,” she said.

A lack of H-1B visas is one factor limiting growth in the U.S., Wise said.

“My God, if I could just hire anyone, our company would be so much better, but I’m so restricted. I can only have 15 percent of my company on visas,” she said.

When prescribing advice to members of the audience interested in becoming roboticists or encouraging others to do so, the panel suggested contributing to open source projects where someone can review your code, and volunteering or finding internships at robotics labs.

Most companies want to hire roboticists with master’s degrees, Wise said, but they need to be open to hiring people based on skill.

Companies that want to attract more diverse candidates should make it known publicly that they’re willing to take qualified candidates regardless of gender, race, or educational background.

“If you can make it obvious, fortunately for you, they’ll flock to you because they don’t have anywhere else to go,” Mataric said.

Changes happening in education will require a cultural shift on the part of companies, but people will have to change too, starting with getting over the idea that they can’t pursue robotics because they don’t think they’re very good at math or some other reason.

“Self-selection is one of the worst things we do to ourselves,” Wise said. “People are incredibly good at self-selecting, and it’s one of the things we have to change as a narrative because the way people are getting educated is changing drastically.”