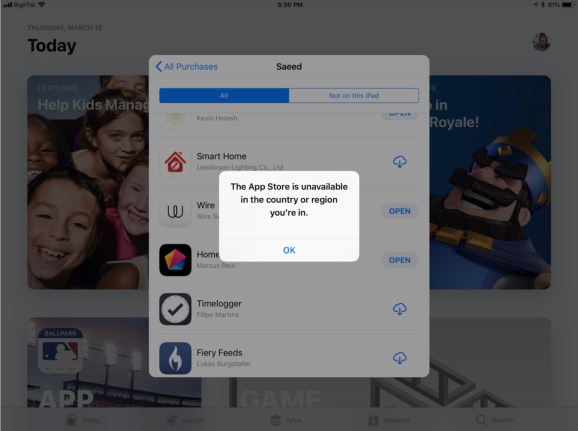 Apparently bowing to government pressure, Apple today blocked Iranian users from accessing its App Store. While the decision does not appear to be fully voluntary on Apple’s part, it comes after nearly two years of smaller-scale removals of apps submitted by Iranian developers, which were previously attributed to U.S. sanctions.

According to tweets from iOS developer Saeed Taheri and others, Iranian users attempting to view the App Store are now shown an error message. When accessing the iOS App Store from Iranian IP addresses, the message states, “The App Store is unavailable in the country or region you’re in.” Previously, Iranian users were able to at least view and download apps from the App Store.

Apple does not have an official presence in Iran, and like other companies, has long been restricted in doing business there due to U.S. sanctions. However, the sanctions do not completely ban Apple products from use in Iran, as Apple’s legal page currently notes that “certain services, software, and hardware incident to personal communications,” including some Apple goods and software, are allowed to be sold in Iran to certain people for specific purposes.

Though Apple reportedly explored the possibility of doing business in Iran during a 2015 easing of tensions between the Iranian and U.S. governments, sanctions were ultimately maintained, and Iran’s government has since had an uneasy relationship with Apple and its products. In July 2016, the Iranian government sought to curtail iPhone smuggling by threatening a ban, only to inadvertently increase both smuggling and iPhone prices. When Apple wouldn’t enter the country, Iran authorized a number of third-party companies to import the phones without Apple’s cooperation.

By January 2017, Apple was beginning to actively deny Iranian developers the ability to sell apps in the App Store. A message to developers noted that no App Store was available for the territory of Iran, and that as facilitating transactions for Iranian entities “may not comply” with U.S. sanctions, Apple would not accept Iranian apps until “international trade laws are revised to allow this functionality.” The removals continued in August 2017, as Apple said that it could not “host, distribute, or do business with apps or developers” connected to Iran.

Coming only two days after Apple CEO Tim Cook was spotted on Washington’s Capitol Hill, ahead of a meeting with Congressional leaders, today’s move appears to eliminate any question as to Apple’s interest in violating U.S.-Iran sanctions. However, it seems unlikely that the move was an intentional slight against Iranian customers or developers; if and when “international trade laws are revised,” Apple’s restrictions could be dropped.