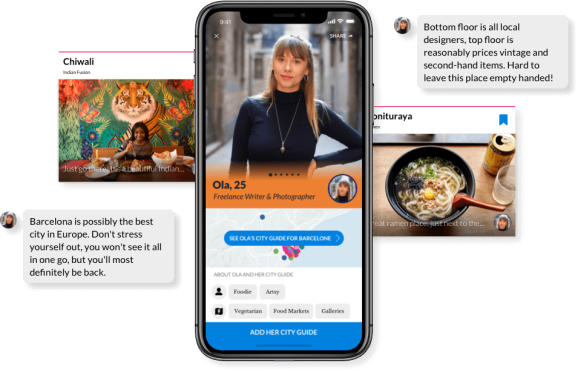 The travel industry stands out as an obvious target for disruption via blockchain technologies. In an environment where just two companies account for 95 percent of the online travel agent market in the United States, a decentralized approach makes sense. Despite that, few have ventured into the space.

One entrant is Cool Cousin, a platform that offers curated city guides created by locals, which is in the process of converting its offering to use blockchain technology and its currency, the Cuz token.

Today, Cool Cousin announced its private token sale has sold out, and it won’t be accepting any additional investors ahead of its public crowd sale, which begins April 3, 2018.

The startup, which was founded in 2015, allows its users to connect with locals — “cousins” — to gain personalized guidance, travel recommendations, and assistance. By tokenizing the platform, Cool Cousin won’t remove fiat from the system, but it will offer incentives to its community in the form of Cuz tokens for verifying content, among other things.

Cool Cousin currently has over 1,000 cousins live on the platform, and the company claims it has another 6,000 in the pipeline. Since its launch in 2016, user growth has been impressive, and the company now has over 500,000 active users across the world. So what does converting to blockchain technology specifically offer its users?

“Using smart contracts over the blockchain helps us solve some of our biggest challenges — remaining unbiased and keeping the high-quality level of the content,” Itay Nagler, cofounder and CEO at Cool Cousin, told me. “What used to be done by an internal team at a small scale will be gradually delegated to the community as it scales up. Blockchain technology allows us to lay the grounds for a self-sustaining, self-governed community — which means that neither the company nor the community members can manipulate or mess with the content due to hidden or commercial interests.”

That new economy, and the transparency of the distributed ledger, allows the community to flourish in a way that is currently not possible. And this mechanism could be applied to other community-led platforms.

“The community is responsible for itself, and the better it functions as content creator and service provider, the more its community members earn,” Nagler said. “The implementation of this mechanism is set in stone, and the rules are clear for everyone and cannot be changed under the terms and conditions by a whim of the company. We are convinced that this is an amazing solution for every community-based platform which wants to see its community thrives in the long term. I believe that we’ll see many more to come — and not just in the travel space, but in every space.”

Of course, in-app and in-platform currencies are not new. What does the Cuz token offer that couldn’t have been realized using a traditional payment model?

“Like most payments over the blockchain, by using the Cuz token as a payment method we guarantee faster and cheaper transactions which will ultimately lead (hand in hand with the self-sustaining community) to a premium service affordable to all,” Nagler said. “But the Cuz token is not just for payments — it is at the core of Cool Cousin’s reward engine, designed to incentivize community participants to push forward, grow, and constantly upgrade the platform. Think of it as a sort of mining — community participants ‘mine’ Cuz tokens by contributing to the success and quality of the platform.”

So what’s next for Cool Cousin?

“In addition to all the traditional challenges that every startup faces, we took on ourselves the responsibility to bring cryptocurrencies to non-crypto people, meaning that one of our biggest challenges is to simplify the process and to make it accessible to all,” Nagler said. “Our roadmap clearly demonstrates the upcoming features, but we’re gonna spend a lot of time iterating, analyzing, and learning about instilling Cool Cousin to millennial travelers on our way to build largest decentralized peer-to-peer travel agency in the world.”