A fledgling augmented reality (AR) startup launched out of stealth today backed by $17 million in funding from some big names in the venture capital (VC) world.

London-based Blue Vision Labs has today announced a fresh $14.5 million series A investment round led by Alphabet’s VC arm GV (formerly Google Ventures), with participation from existing investors including Accel, Horizons Ventures, and SV Angel, which had previously plowed around $2.5 million into the startup via a seed round back in 2016.

Not a great deal was known about Blue Vision Labs before now because, well, it was in stealth. But today the company served up some insights into what it’s been cooking in London Town.

In a nutshell, Blue Vision Labs is setting out to help developers create collaborative AR applications, as opposed to the existing state-of-play, which typically entails individual users interacting with AR content on their own. It’s all about making AR social, with multiple users able to experience the same AR experience simultaneously.

To do so, Blue Vision Labs has built a cloud-based computer vision platform built for multi-user AR applications. The company said that it provides self-updating 3D city maps that can establish where each participant’s phone is “with centimeter accuracy” using just the visual information captured by the camera. It currently works in London, San Francisco, and New York City, though it will be arriving for more cities later this year. 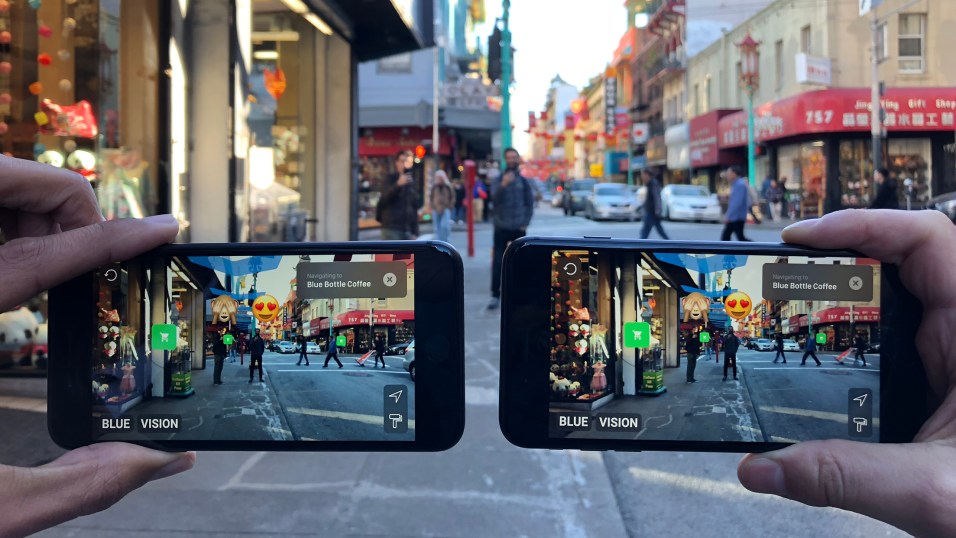 “The ability to create shared, persistent AR applications has long been the missing piece in an industry that’s estimated to be worth $83 billion by 2021,” noted Blue Vision Labs cofounder and CEO Peter Ondruska. “The concept for Blue Vision has been seven years in the making, and our launch is a pivotal moment for the future of augmented reality. We’re only just scratching the surface of what our technology could bring to countless industries and sectors, from gaming to self-driving car navigation, and today’s investment brings us closer to realizing that potential.”

AR on the up

AR has been a fledgling medium for years, but with the advent of powerful smartphones, it has recently shown some signs of its true potential. While it has yet to take off in a big way, AR is slowly creeping into industries — DroneBase recently raised $12 million to bring AR to aerial drone imagery, for example. The interior design realm has long embraced AR too, with Ikea offering AR-infused smarts for several years, letting shoppers preview specific pieces of furniture in their home. Last year, the retail giant launched the new Ikea Place app, which allows you to drag and drop virtual furniture anywhere you like on your screen.

GV’s involvement as lead investor in Blue Vision Labs is notable, and it comes just a few months after the VC firm participated in the $23 million funding round of Modsy, a 3D interior design company that augments your rooms to let you visualize how it will look after a fresh kit-out. Back in 2014, Google itself also led a mammoth $542 million funding round into Magic Leap, which is working on an AR head-mounted display.

“We are excited to invest in one of the best technical teams in London; a team that has a working product that can localize, persist, and share in real time with a single smartphone lens,” added GV partner Tom Hulme, who also now joins Blue Vision Labs’ board.

Last year was pivotal for AR, with Apple ARKit, Google ARCore, and Facebook’s AR camera effects platform all arriving on the scene, and it does feel like AR is edging into more exciting times.

Now that Blue Visions Labs is out of stealth, the company has opened an early-access program for developers to access a software development kit (SDK) for Android and iOS devices to build AR applications with multiple users in mind.