eBay is continuing its augmented reality (AR) embrace with the launch of a new feature for sellers to easily find the right box to fit their products.

Available on some Android devices in the U.S. from today, eBay is tapping Google’s ARCore software development kit (SDK) to leverage motion-tracking and environmental awareness smarts to help merchants position a physical product inside a virtual box.

To access the new feature, tap the “selling” part of your eBay account, and hit “Will it Fit?” to try out the beta feature. You’ll need to place your item on a flat, horizontal surface for this to work. 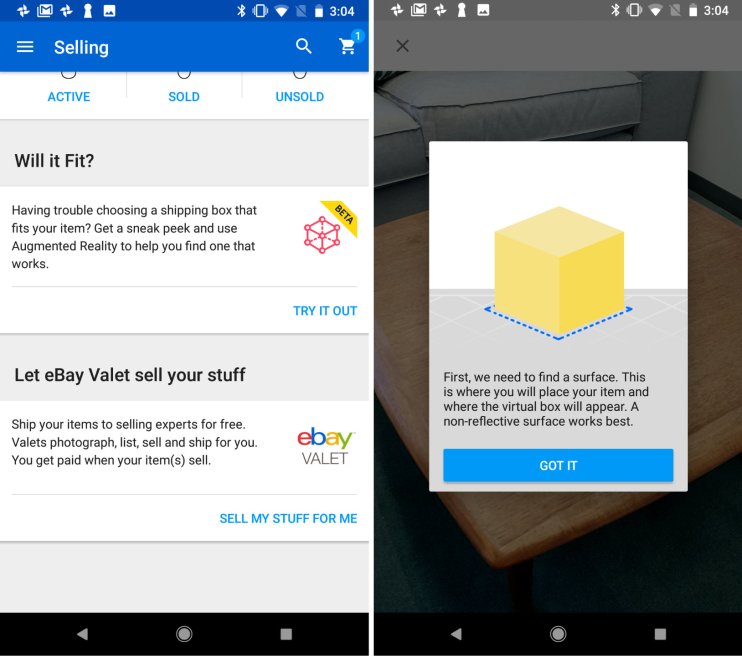 Above: Will it fit?

Then, you’ll need to aim your smartphone camera at the surface around the product to map the area. You can try various USPS package sizes to find the right box. 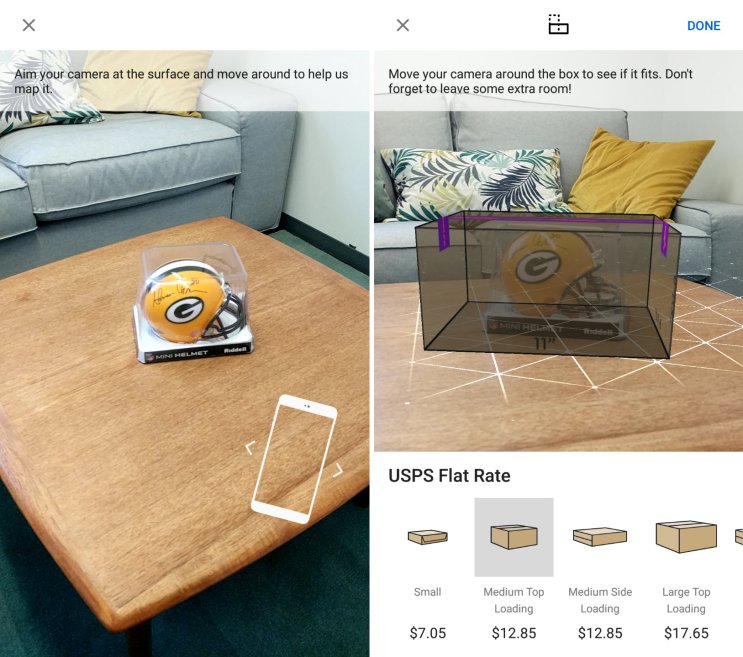 Above: Find the right box

Google debuted its ARCore SDK back in August, bringing AR to Android phones without the need for additional sensors or hardware. ARCore only works on Android 7.0 (Nougat) devices and later, though only a handful currently meet the official minimum hardware requirements. These include Google’s own Pixel-branded smartphones, Samsung Galaxy S7 and over, OnePlus 5, LG V30, and the Asus Zenfone AR.

eBay has dabbled with AR in the past, including back in 2011 when it introduced a “see it on” feature that allowed you to “try on” virtual sunglasses before committing to buy. But that was pretty basic stuff that did little beyond transposing a pair of shades onto a selfie. With the explosion of powerful smartphones and increasing investment in the underpinning software, AR is getting much smarter, and today’s rollout represents one of a number of AR features eBay has lined up for the coming months.

“By coupling Google’s ARCore platform with premiere AR technology built at eBay, we are continuing to make the selling experience more seamless,” noted eBay mobile head James Meeks. “This technology is just one example of the types of innovation we’re working on to transform eBay.”

eBay has also been doubling down on its computer vision investment in recent times. The ecommerce giant now offers computer vision search tools to help shoppers find items using photos, for example, and it recently hired Jan Pedersen from Twitter to spearhead its broader AI efforts.

Some estimates predict that the AR industry will be worth $83 billion by 2021, and for good reason. Major players in the technology realm are now investing heavily in AR, with Apple ARKit, Google ARCore, and Facebook’s AR camera effects platform all launching last year. Amazon, too, is investing in AR, recently rolling out a feature that lets shoppers view a 3D virtual version of a product in their home before they buy. The company also recently patented a concept for an AR mirror for trying on clothes virtually.

The new eBay ARCore feature is available in the updated Android app for compatible devices in the U.S. from today, and the feature will be landing globally in the future though the company couldn’t confirm a date. Additionally, there are plans to extend this functionality to iOS devices via ARKit, but again the date has yet to be determined.