The cities angling to become a tech hub in the Midwest typically fall into one of two categories. There are college towns, like Columbus and Ann Arbor, and traditional hubs of Fortune 500 activity, like Chicago and Minneapolis.

Then there’s Fishers, Indiana — a suburb of 90,000, located 20 miles northeast of Indianapolis. On Wednesday, the city unveiled its latest tactic in a several-years-long effort to prove that you can build a tech community in the suburbs: a coworking space and incubator for Internet of Things startups.

Called the Indiana IoT Lab, it’s the first such facility in the state, according to its CEO and founder, John Wechsler. It’s also one of the few efforts to shine a light on hardware startups in a state that has become known for SaaS startups in recent years.

The Indiana IoT Lab is a 501(c)3 nonprofit organization that will be generating most of its income through sponsorships and memberships. The city of Fishers is paying for the IoT lab’s lease.

The nearly 25,000 square foot space is optimized for the needs of companies that might operate within all the different spaces necessary to bring an IoT product or service to life, like cloud operations and edge hardware. For example, all of the furniture in the space is modular. This could enable a company working on developing a vehicle-to-vehicle communication system to bring in an automobile that they’re building a prototype in. The space also has maker areas stocked with equipment like 3D printers, soldering stations, and a laser cutter.

As of today, the Indiana IoT Lab has about 50 members — who each pay $1,000 a year to get access to the space — and 35 sponsors. Sponsors of the space include local organizations like Indiana University, as well as Comcast and AT&T — the latter of which will be sponsoring the IoT Lab’s first event, a civic hackathon. 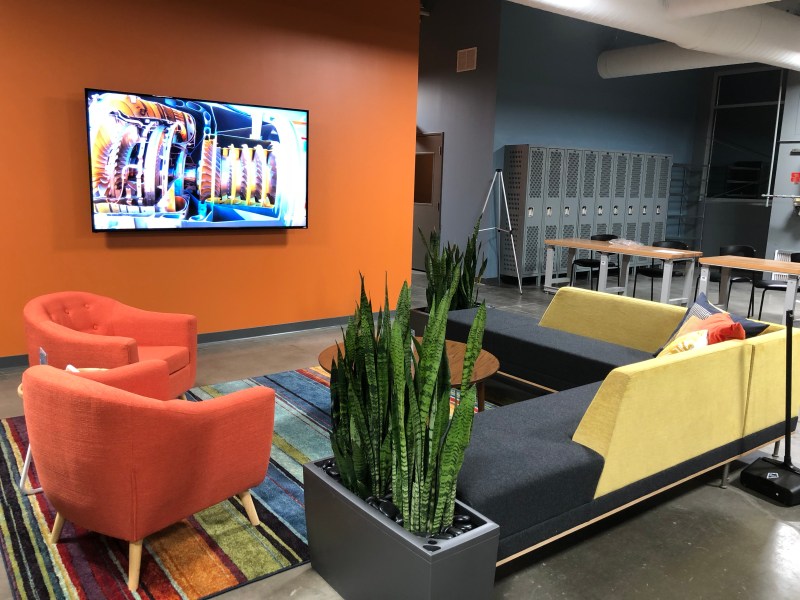 ClearObject, an IoT systems integrator and developer, is one of the inaugural tenants. The company, which generated $15.3 million in revenue in 2016, is one of the fastest-growing startups in Indianapolis.

“It was difficult to do our work as an IoT pioneer in standard office spaces or coworking spaces … and he [Wechsler] understood that,” McDonald told VentureBeat.

Wechsler’s goal is not to stick with one IoT lab, but to create a model that can be scaled across Indiana. He thinks that the state’s historical strength in manufacturing — the industry employs 16.8 percent of Indiana’s workforce — positions its towns to become leaders in IoT device manufacturing and integration. Southern Indiana, for example, is home to a number of manufacturers specializing in plastics and injection molding, so an IoT Lab there might be focused on recruiting companies that can work within that specialty.

“If we can take the best of IoT and merge it with our leadership in manufacturing, distribution and agriculture, it reasons that we should be able to lead in the next generation of product,” Wechsler told VentureBeat in a phone interview in December.

Making the suburbs a cool place to do business

Fishers Mayor Scott Fadness (R) told VentureBeat that Fishers has traditionally held a reputation similar to that of most suburbs: People lived there, but didn’t work there. Fishers’ most prominent industry previously was home construction — a sector that was hit hard by the 2008 recession.

“We realized that for us to be economically viable, we had to pivot,” Mayor Fadness told VentureBeat, parroting the language of the tech startups his city soon decided it needed to recruit.

Fadness bonded with Wechsler — a Fishers resident, and a former executive at a number of Indianapolis tech companies — at a town event over their shared desire to transform Fishers into a friendlier place for entrepreneurs.

The pair decided a coworking space — which at the time was a rarity for the Indianapolis suburbs — would be the best way to rally a critical mass of entrepreneurs. In 2012, Wechsler and Fadness opened Launch Fishers, then a 16,000 square foot space. The city of Fishers paid Launch Fishers’ lease, as it is doing for the IoT Lab.

“Indianapolis didn’t really have the strong vision that [Fishers] had, in terms of focusing on high tech and entrepreneurship,” Hendryx-Parker said.

In 2015, the city spent $3.1 million to purchase approximately 35,000 additional square feet of office space for Launch Fishers. Now, the facility is the largest coworking space in Indiana. It’s home to approximately 600 members, representing 300 businesses. Launch Fishers has also moved beyond Fishers, having opened a 12,000 square coworking facility in downtown Indianapolis in September.

In 2015, before its expansion, the space generated more than $550,000 in profits. Wechsler declined to comment on how profitable Launch Fishers has been after its expansion.

“It’s pretty significant how it’s changing our economy,” Wechsler said. “If you rewind, let’s say, 5 and a half to 6 years ago, Fishers wasn’t even really on the map as a place that would be host to the kinds of companies that we’re seeing start here and grow here today.”

Michael Hicks, a professor of economics at Ball State University in nearby Muncie, Indiana, doesn’t believe Launch Fishers has had as much of a positive impact on Fishers as Wechsler likes to say — and is skeptical that the IoT Lab will have a measurable effect on the business community.

Though Fishers’ population has increased in the time that Launch Fishers has opened its doors, so has that of other suburbs in Indiana’s Hamilton County. Neighboring cities Carmel and Noblesville, for example, have seen tremendous population increases. And Hicks says there’s been no noticeable increase in wages or in the total number of small businesses located in Fishers since Launch Fishers opened its doors.

“Entrepreneurship is obviously critical to an economy. What’s not clear is you can do things to make it come to your place directly by incentivizing these [types of facilities],” Hicks told VentureBeat. He says that people are moving to Fishers for other quality-of-life factors — good schools, for instance, and a walkable, lively downtown.

Fishers has one thing in common with many of the startups it hopes to incubate: It’s only a few years old. The city only became large enough to be classified as a town in 2012.

What will be critical to the IoT Lab’s success is if it can continue to recruit companies as its inaugural startups outgrow the space, a stage that Launch Fishers has already reached. Yaw Aning, the CEO and cofounder of Sticksnleaves, a web and mobile app developer that was one of Launch Fishers’ inaugural tenants, told VentureBeat that his company moved out of Launch Fishers and into downtown Indianapolis in November.

Aning says that the move was driven by the wish to be closer to clients and other partners, including a hardware developer that Sticksnleaves works with. If the IoT Lab is successful, perhaps fewer Fishers startups will find themselves having to move downtown to be closer to their clients.