Silicon Valley has a well-documented problem: There are not enough women in executive roles.

The reasons are many and varied, and far more nuanced than sometimes they appear to be when reading article after article on the subject or when talking with people in the Bay Area about the cause of inequality.

One way to address the issue is to stop talking about the problem and instead do something tangible about it.

Today, Juvo — a company that establishes financial identities for people that are creditworthy yet financially excluded — has announced two significant female executive hires, both of whom have high profiles in the Valley. This brings Juvo’s senior leadership team to 40 percent female.

Adding two female executives in itself is rare. A look at gender diversity in Silicon Valley executives by Observer in November 2017 paints a bleak picture of what many consider the world’s leading tech ecosystem.

While these appointments is a move in the right direction, at Juvo this is a small part of a much larger story. I visited the company’s headquarters in San Francisco this week to find out more about its attitude toward hiring, diversity, and equality.

With offices in Miami, Buenos Aires, São Paulo, Amsterdam, Manila, and Jakarta, the Juvo team is diverse, global, and employs people that collectively speak over 20 languages. That gives the company a different perspective on the issue of equality from the outset.

“First, to be fair to the tech industry and Silicon Valley, this problem exists across a wide range of industries,” Steve Polsky, CEO and founder at Juvo, told me. “That said, the tech industry can and should lead the way in instituting change. I believe rather than looking at the ‘why,’ it’s more productive to look at the ‘how.’ How companies can continue to ‘Press for Progress’ and adopt an equal and balanced place for women and men from all backgrounds to work.”

“Press for Progress,” of course, was the theme of this year’s International Women’s Day, calling on people to accelerate gender equality in the face of the recent World Economic Forum’s 2017 Global Gender Gap Report findings, which concluded that gender parity is over 200 years away.

Polsky believes that actions speak louder than words and that if we’re going to make that progress towards equality, just talking about the problem won’t get us there.

“Earlier this week I announced my pledge to Founders For Change,” Polsky said. “I did this because I feel strongly that we need to move away from just talking about the problem of diversity in tech — and in Silicon Valley in particular — and instead take real action to affect change. Initiatives like this ensure we hold ourselves and each other to a higher standard of excellence and accountability.” 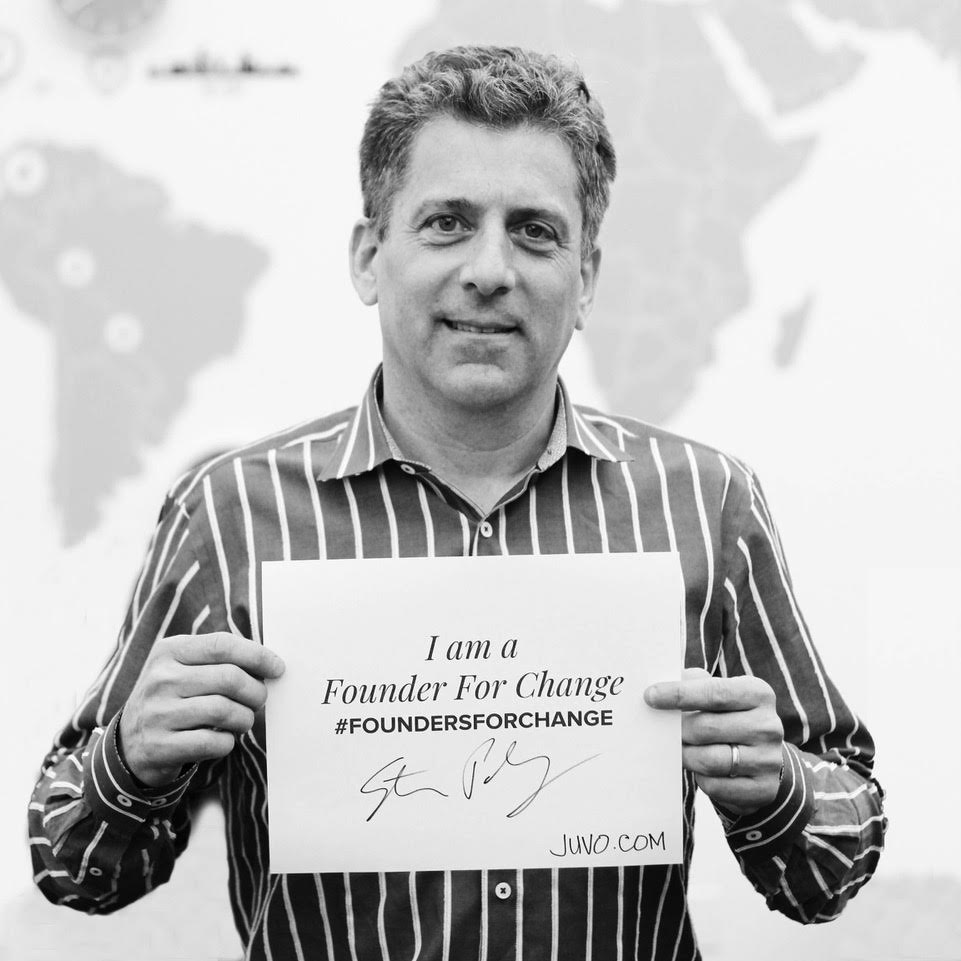 Above: Steve Polsky, CEO and founder at Juvo

Juvo’s driver for equality and diversity makes complete sense when you align that mission with the product itself.

While that’s an entirely sanitized technology-based description of what Juvo does, it isn’t really what the startup does for its users.

There are millions — if not billions — of unbanked individuals that need access to services, such as ensuring their mobile phones are topped up so they can make calls and use data. That’s an essential service in countries where having no mobile service means walking for miles to get a top-up, a journey that in itself can be fraught with danger. Being able to top up the phone using an advance from Juvo can make the difference between the safety of a taxi ride versus a dangerous walk.

As users accept advances through the app — which are interest-free and are offered with zero transaction charges — and pay them off, they gain status. The higher their status, the more significant the advance.

“Identity is critical in providing digital access to financial services, but it doesn’t mean traditional credit guidelines must be followed,” Polsky said. “That’s where the mobile phone comes in and is so powerful because it enables us to reach billions of unbanked people around the world. I founded Juvo with a mission to give the unbanked an opportunity to access financial services via their mobile phones, regardless of income, gender, and geographical location.”

That mindset by itself forces a culture of diversity, equality, and inclusion. Juvo solves a real problem for those who live in developing countries, which means the needs of a diverse population are always at the forefront of what the company does, the culture it has fostered, and the way it thinks about the world’s problems.

“Across the globe, over 71 percent of the population has a mobile phone, and 78 percent of them are on a prepaid mobile plan — in developing countries, this number reaches 95 percent. So the majority of the unbanked and underserved have a mobile phone and make frequent cash transactions via prepaid top-ups. Every technology, design, and human challenge that Juvo overcomes improves the lives of a person, a family, a community through meaningful change. Juvo knows that there are billions of creditworthy people in the world and they just to need to be reached and given opportunity.”

And it is working with other companies that have a similar global profile.

“We recently announced a strategic investment from Samsung Next, with whom we’ll be collaborating to put smartphones into the hands of the next billion users,” Polsky said. “From the beginning, Juvo has been driven by the vision of ‘access for all’ and the idea that doing good is also good business. This new collaboration with Samsung Next allows us to further realize our vision by being among the first to integrate financial identity deeply into the hardware device and, with it, offer unprecedented access to greater financial services.”

With two new female executive hires, a global footprint, a diverse workforce, and a focus on helping people from all backgrounds across the world, Juvo is taking action to redress the balance in every area — not just gender equality in tech. And actions always speak louder than words.