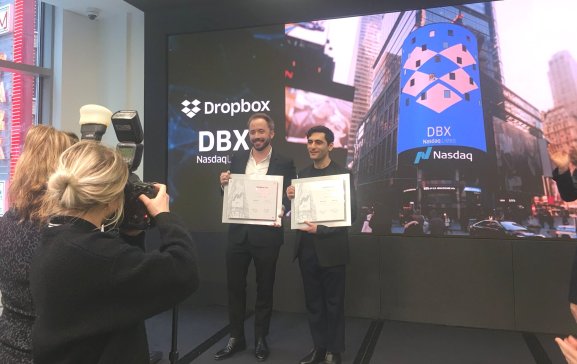 It’s D-Day. Dropbox Day, that is — the day that one of the biggest names in the technology startup world ceases to be a private company and embraces Wall Street.

The company’s shares started trading this morning on the Nasdaq at $29, representing a 38 percent jump on the $21 its shares were priced at yesterday. In the minutes after trading kicked off, shares hit the $31 mark, translating into a 48 percent hike on its IPO price.

The San Francisco-based cloud storage company first set its IPO price range at between $16 and $18 earlier this month, but later raised this by $2 due to strong demand before arriving at its final $21 IPO price on Thursday. This gave it a $9.2 billion valuation — up substantially on the $7 billion valuation it was pegged at just days earlier, but still well below its $10 billion private valuation from 2014.

Now, we have a much clearer picture of the public demand for what was one of the most anticipated tech IPOs since Snap last year.

Dropbox is in fact the second big tech IPO of 2018. San Jose-based information security company Zscaler went public on the Nasdaq last week with an IPO price of $16, and today its value is sitting at nearly double that.

It’s still early days, but the appetite for tech IPOs looks good so far in 2018. And that is good news for Spotify, which is gearing up for its direct listing 10 days from now.

11 years in the making

Dropbox, which is trading under the DBX ticker symbol, has taken nearly 11 years and almost $2 billion in funding to reach this stage. Founders Arash Ferdowsi and Drew Houston penned a public letter (via Dropbox, natch) ahead of trading this morning, reminiscing about the early days at Dropbox and how it’s working to improve productivity in a world full of distractions.

“If Einstein were alive today, he’d start his day by clearing Groupons and LinkedIn invitations out of his inbox,” Houston said. “Then he’d get down to work — and right before his Eureka moment, his phone would buzz with a Slack message. Would we still understand relativity?”

And this will be Dropbox’s position as a public company, continuing where it left off as a private company: It wants to be seen as the company that is “connecting the dots” between tools and apps, and helping the world’s workforce focus on the tasks that matter.

“Teams need to have all their information in one place,” added Houston. “It’s crazy that in 2018, it’s easier to search all of human knowledge than a company’s knowledge — at home we have one search box, but at work we have ten. We see a big opportunity to solve this problem by continuing to tie the world’s different tools and ecosystems together.”

A side note worth highlighting too: Dropbox represents the first Y Combinator alum to go public. The accelerator made a $15,000 seed investment way back in 2007.