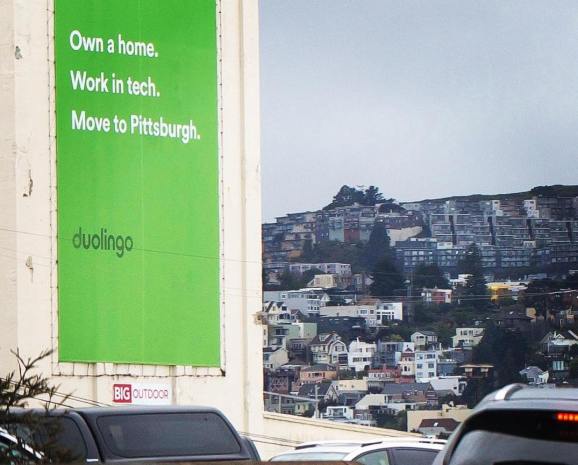 As the cost of living continues to rise in Silicon Valley, tech companies in other parts of the country are getting more aggressive in pitching workers to move to their cities for a better quality of life.

This week, the language-learning platform Duolingo put up an ad along San Francisco’s US Highway 101, encouraging residents to move to Pittsburgh where the company’s headquarters are based. In Pittsburgh, you can both “work in tech” and “own a home,” the ad touted.

Duolingo CEO Luis von Ahn told VentureBeat in an email that the company was prompted to put up the ad after realizing that most of its Pittsburgh employees who relocated to the city cited the low cost of housing as one of the deciding factors. Von Ahn said that 85 percent of the company’s Pittsburgh-based employees moved to the city from somewhere else. The company has 110 employees, the majority of whom work out of Pittsburgh.

“One [employee] who recently joined Duolingo moved from the Bay Area and ended up buying a house almost immediately,” von Ahn said. “He said he never would have been able to do that before, but here in Pittsburgh, he found a reasonably priced home on a large plot of land and jumped on the opportunity to be a homeowner and have a huge yard for his dog.”

Even if some workers are willing to settle for a smaller home in order to live in an area with more tech companies, migration trends suggest that fewer people are willing to do that. In 2016 and 2017, more people moved out of the San Francisco-Oakland-Hayward metropolitan area than in.

A spokesperson for Duolingo said that the ad is set to be displayed for one month.