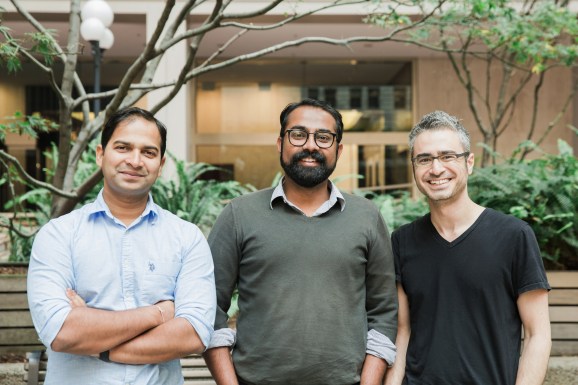 Spoke, a company that aims to help businesses get their internal processes together through an automated ticketing system, exited beta today, after a soft launch in October 2017.

Users can ask questions of the software through email and Slack, and it will use AI to analyze the text of their question and try to find an answer through an internal knowledge base. If an answer doesn’t exist, Spoke will generate a ticket asking a human to respond to the query. The idea behind it is to get the best of both worlds — automation for quick responses, and a human touch when necessary.

Spoke cofounder and CEO Jay Srinivasan told VentureBeat in an interview that it’s targeting companies with a few hundred employees as its core customer base. Customers usually pick it up first for use with the IT help desk or human resources teams, but Spoke is meant to expand beyond those applications into other functions as well.

“If you look at the Spoke that we use within our company, we use it for IT, HR, marketing, sales, some engineering questions,” Srinivasan said. “We have one for finance. We have one for customer invoices. That’s what excites me.”

That’s how the company is aiming to differentiate itself from businesses like Zendesk, which offers help desk software, and those that try to do business automation through the application of bots. Spoke also sees its design as a differentiator. Cofounder and chief creative officer David Kaneda said the company is aiming to be simple and friendly with its approach, cutting down on the amount of work people need to do.

Above: An animation shows how Spoke integrates with Slack.

Srinivasan said that the system’s intelligence is supposed to help with that goal by providing for powerful functionality without excess user interface controls. For example, the company’s software doesn’t have a rules engine that declaratively lays out how certain tickets get handled, since the system determines that from the behavior it observes.

That’s not to say Spoke will never add such a feature, but its initial vision of the product is designed to avoid it.

In the time between its beta and general availability announcements, the San Francisco-based startup learned a number of interesting things about what its customers need and how to best reach them. For example, advertising on Instagram is surprisingly effective for the company and gained them key customers during its beta period.

“If you think about who uses Spoke, the person we’re selling to is the IT manager for a 500-person company, or in some cases the head of HR, the HR manager for the same company,” Srinivasan said. “And it has no connection to the type of industry they’re in. Your casino, your agriculture company, and your startup in Silicon Valley all have IT teams, all have HR teams.”

One such firm is Almaco, an agricultural equipment manufacturer based in Iowa, with offices in Brazil. It’s not a typical beta customer for a Bay Area startup, but Spoke says the same features that work for a venture capital firm like First Round Capital (also one of its customers) work for agriculture.

Cofounder and CTO Pratyus Patnaik said the company’s customers started out using the system via email, but are increasingly interacting with Spoke via Slack as they get used to the software, since automated responses come in quickly. That’s good news for the company’s AI.

“This was a good thing for us, because generally when you write an email, it’s a verbose email, the AI has to do extra work on figuring out what the right sentences we should pick on [are],” he said. “In Slack, it’s just one or two short sentences. Right now, given the technology, it’s much easier to get the intent out or to run searches against [fewer sentences].”

Now that the company reached general availability, the team is focused improving the repeatability of its business.

“What that means is someone can sign up, start using the product, they understand what it does and how it helps them, and then they actually see that value as they use it,” Srinivasan said. “We feel strongly that’s going to happen, that’s what we learned over the course of the soft launch, but I want to see that repeatably. And then I want to repeatably see people signing up for the product, so that implies that our lead acquisition efforts are working well, and I want to repeatably see people paying us for the product.”

The company is especially focused on pushing its self-service business, which will allow customers to buy and deploy Spoke without working through its sales team.