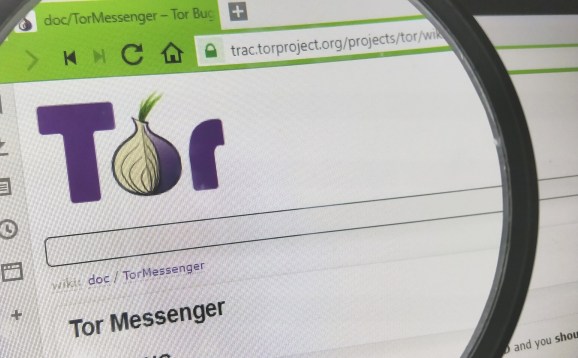 The Tor Project has announced that it’s winding down its privacy-focused Tor Messenger chat program, nearly three years after its beta debut.

Tor, an acronym of “The Onion Router,” is better known for its privacy-focused browser that directs traffic through a volunteer-run network of relays to prevent any untoward eavesdropping on users’ online activity. Indeed, the Tor Browser is often used by activists, whistleblowers, and anyone wishing to remain anonymous, and major companies — such as Facebook — have embraced Tor over the years.

The people behind the anonymity network started working on Tor Messenger in early 2014, launched it in alpha a year later, before rolling out the beta version in October 2015, where it has remained since — though there have been more than 10 separate beta releases.

Tor Messenger worked in conjunction with many of the popular networks and instant messaging (IM) protocols, including ones from Facebook, Google, Twitter, Jabber (XMPP), and Yahoo. This was important, because people are far more inclined to use a service that is compatible with networks they most frequently use to communicate with friends. It also adopted off-the-record (OTR) messaging by default, and messages could only be sent to other clients with OTR enabled. It didn’t offer completely privacy, however — although the sender’s IP address was concealed, some metadata could still be logged by the server, including contacts and details around when and how often two people communicated.

In terms of why Tor Messenger is being sunsetted, well, there are a number of reasons. Arguably the most important of the reasons is that uptake wasn’t quite where Tor wanted it to be at to justify working on it, while it also realized that it wasn’t the perfect private messaging client due to its metadata problem. “The adoption of Tor Messenger was low and the real need is for metadata-free alternatives,” Tor Messenger developer Sukhbir Singh wrote in a blog post.

However, the impetus for pulling the plug was that Tor Messenger was built upon Instantbird, an open-source messaging client developed in the Mozilla community and led by Florian Quèze. He announced last year that he was stopping work on Instantbird.

“Even after all the releases, Tor Messenger was still in beta and we had never completed an external audit (there were two internal audits by Tor developers),” added Singh. “We were also ignoring user requests for features and bug reports due to the limited resources we could allocate to the project. Given these circumstances, we decided it’s best to discontinue rather than ship an incomplete product.”

You can actually still use Tor Messenger if you’ve previously installed it; however, as of last month, it is no longer being maintained and Tor recommends that you don’t use it.