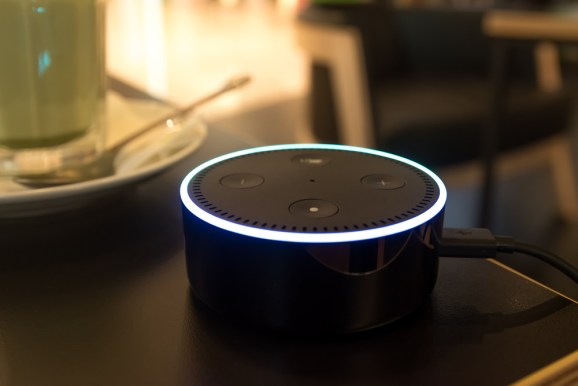 Amazon today announced that people can now add music or live radio to Alexa Routines, which are commands that can accomplish multiple things with a single command. Starting today, Routines made by Alexa users in the U.S. can include music from a specific artist, playlist, album, or station or from streaming services like Spotify, Pandora, Amazon Music, iHeartRadio, and TuneIn.

Alexa Routines for Echo device users appears to be part of Amazon’s plan to move human-AI assistant interaction beyond a simple, single command. Custom commands can be configured with any phrase to carry out a combination of smart home device controls or deliver traffic, news, or weather reports. There’s also “Alexa Says,” a portion of Routines that was added after the debut of Routines last fall; it can be added to a Routine if you want Alexa to chime in to say “Let’s party” on your birthday or “It’s nice to have you home” when you get home.

You can also use Routines to schedule an event so, for example, you can program Alexa to play the weather and your favorite news every morning at a certain time or your favorite podcasts on weekends.

The news comes the same day as Spotify, a company whose service helped aid in the rise of the smart speaker, went public for the first time on the New York Stock Exchange (NYSE). Spotify is said to be planning to create its own smart speaker and is currently experimenting with more voice control in its iOS and Android smartphone apps.

The ability to accomplish multiple tasks at once is intended to get AI assistants to become a regular part of your daily routine. Alexa chief rival Google Assistant rolled out its Routines for the first time last month. In both instances, Google and Amazon want you to utilize Routines when you wake up in the morning, when you leave home for work, when you arrive back home from work, and when you go to bed at night.

Alexa’s presets come with these themes, but Routines can be created using the Alexa app for any one-time or recurring event, whether it’s for a special occasion, specific days of the week, or just when you’re in a good or bad mood.

This is Amazon’s most recent effort to make music an even deeper part of the Echo experience following the 2017 linking of Alexa to the Amazon Music app for better music voice control in September and introduction of music alarms in December.

While Amazon says voice app usage is going up, streaming music remains one of the most popular use cases for a smart speaker.

Updated April 4 at 11:21 a.m. to specify that adding music or radio to Routines is currently only available for Alexa users in the United States.