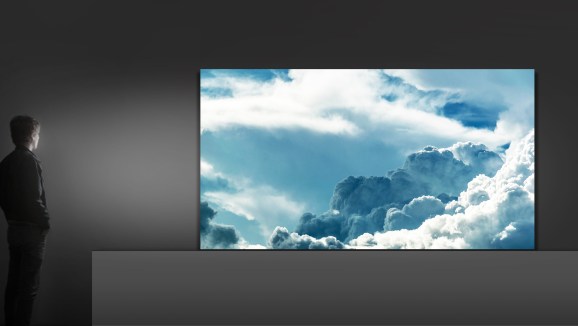 A MicroLED display shown off by Samsung at CES.

A report this morning from Taiwanese supply chain publication DigiTimes suggests that Apple’s plans for producing next-generation MicroLED screens could be more ambitious than originally expected. According to the report, Apple is already working with Taiwan Semiconductor Manufacturing Company (TSMC) on small and large screens for three separate devices, with production timelines as soon as the second half of this year.

DigiTimes claims that Apple is working on a 1.3- to 1.4-inch MicroLED panel for Apple Watch use that could enter mass production in the second half of 2018 or in 2019. The cost is initially expected to be 4 to 6 times that of the OLED panels used in current Watches, so the screen might only be used in Apple’s “top-of-the-line” models. A similar pricing differentiation has previously been used with Ion-X and sapphire screen glass in entry-level and mid-range Watches.

The report also claims that Apple is working on a 0.7- to 0.8-inch display for an “AR wearable device, potentially AR glasses.” This screen would be half as large on the diagonal as an Apple Watch display but would look huge if placed close to an eye. This screen apparently has no mass production schedule.

Last but not least, Apple is said to be working on a project with “large-size MicroLED panels on TFT-based backplanes” for use in “products sized much larger than its MacBooks.” The only current Apple devices with screens larger than MacBooks are iMac desktops. This panel could enter mass production “in 2019 or later,” according to the report.

MicroLED screens are expected to be brighter, superior in color accuracy, and stronger in contrast compared with OLEDs, as well as capable of faster refresh rates. If their expected benefits pan out, they would enable Apple to build thinner, more energy-efficient devices with noticeably better displays.

DigiTimes’ timetables conflict with those offered last month by Bloomberg’s Mark Gurman, who reported on the existence of Apple’s MicroLED development plans, saying that initial screens were likely to be “a few years” off. While Gurman’s early reporting on Apple’s plans was highly accurate, DigiTimes’ track record when it comes to timing is spotty, particularly concerning new components Apple is readying for initial production. As such, it’s advisable to take the 2018 Apple Watch date with a grain of salt. That said, DigiTimes’ claims regarding Apple’s AR screen plans track with a November 2017 Bloomberg report that Apple is developing AR glasses for release around 2020.