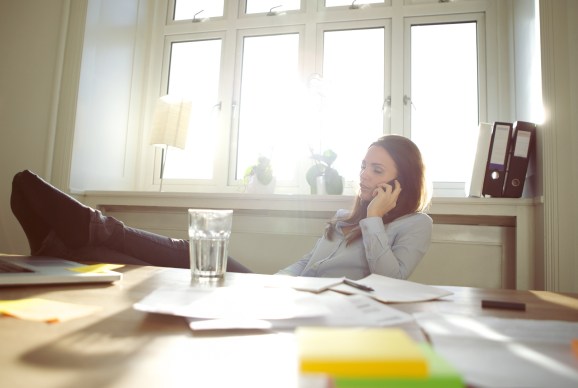 If you asked me why I gravitated to startups rather than work in a large company I would have answered at various times: “I want to be my own boss.” “I love risk.” “I want flexible work hours.” “I want to work on tough problems that matter.” “I have a vision and want to see it through.” “I saw a better opportunity and grabbed it. …”

It never crossed my mind that I gravitated to startups because I thought more of my abilities than the value a large company would put on them. At least not consciously. But that’s the conclusion of a provocative research paper, Asymmetric Information and Entrepreneurship, that explains a new theory of why some people choose to be entrepreneurs. The authors’ conclusion: Entrepreneurs think they are better than their resumes show and realize they can be more successful by going it alone. And in most cases, they are right.

I’ll summarize the paper’s conclusions, then share a few thoughts about what they might mean – for companies, entrepreneurs and entrepreneurial education. (By the way, as you read the conclusions keep in mind the authors are not talking just about high-tech entrepreneurs. They are talking about everyone who chooses to be self-employed – from a corner food vendor without a high school diploma to a high-tech founder with a PhD in Computer Science from Stanford.)

The authors’ research came from following 12,686 people over 30+ years. They found:

1. Getting a job involves signaling. When you look for a job you “signal” your ability to employers via a resume with a list of your educational qualifications and work history. Signaling is a fancy academic term to describe how one party (in this case, someone who wants a job) credibly conveys information to another party (a potential employer).

2. Entrepreneurs believe their signal falls short. People choose to be entrepreneurs when they feel that they are more capable than what employers can tell from their resume or an interview. So entrepreneurs start ventures because they can’t signal their worth to potential employers.

3. Entrepreneurs have higher average pay. Overall, when people choose entrepreneurship they earn 7% more than they would have in a corporate job. That’s because in companies pay is usually set by observable signals (your education and experience/work history).

4. But the pay is less predictable. The downside of being an entrepreneur is that as a group their pay is more variable – some make less than if they worked at a company, some much more.

6. Immigrants also have trouble signaling. Signaling (or the lack of it) may explain why some groups such as immigrants, with less credible signals to existing companies (unknown schools, no license to practice, unverifiable job history, etc.) tend to gravitate toward entrepreneurship. And why funding from families and friends is a dominant source of financing for early-stage ventures (because friends and family know an entrepreneur’s ability better than any resume can convey).

7. Entrepreneurs defer getting more formal education because they correctly expect their productivity will be higher than the market can infer from just their educational qualifications. (There are no signals for entrepreneurial skills.)

The most provocative conclusion in the paper is that asymmetric information about ability (that is, when one party has more or better information than the other) leads existing companies to employ only “lemons,” relatively unproductive workers. The talented and more productive choose entrepreneurship. The entrepreneurs know something potential employers don’t – that nowhere on their resume does it show resiliency, curiosity, agility, resourcefulness, pattern recognition, tenacity, and having a passion for products.

This implication, that entrepreneurs are, in fact, “cherries” contrasts with a large body of literature in social science, which says that the entrepreneurs are the lemons — those who cannot find, cannot hold, or cannot stand “real jobs.”

So, what to make of all this?

If the authors are right, the way we signal ability (resumes listing education and work history) is not only a poor predictor of success but has implications for existing companies, startups, education, and public policy that require further thought and research.

In the 20th century, when companies competed with peers with the same business model, they wanted employees to help them execute current business models (whether it was working on an assembly line or writing code supporting or extending current products). There was little loss when they missed hiring employees who had entrepreneurial skills. However, in the 21st century, companies face continuous disruption; now they’re looking for employees to help them act entrepreneurial. Yet their recruiting and interviewing processes – which define signals they look for – are still focused on execution, not entrepreneurial skills.

Surprisingly, the company that best epitomized this was not some old-line manufacturing company but Google. When Marissa Mayer ran products at Google, the New York Times described her hiring process: “More often than not, she relies on charts, graphs and quantitative analysis as a foundation for a decision, particularly when it comes to evaluating people. … At a recent personnel meeting, she homes in on grade-point averages and SAT scores to narrow a list of candidates, many having graduated from Ivy League schools … One candidate got a C in macroeconomics. ‘That’s troubling to me,” Ms. Mayer says. “Good students are good at all things.'”

Really. What a perfect example of adverse signaling. No wonder the most successful Google products, other than search, have been acquisitions of startups not internal products: YouTube, Android, DoubleClick, Keyhole (Google Maps), and Waze were started and run by entrepreneurs. The type of people Google and Marissa Mayer wouldn’t and didn’t hire started the companies they bought.

The paper’s findings raise some interesting questions about how to drive entrepreneurship.

Better signals. When I shared the paper with Tina Seelig at Stanford she asked, “If schools provided better ways to signal someone’s potential to employers, will this lead to less entrepreneurship?”

Imagine a perfect world in which corporate recruiters found a way to identify the next Steve Jobs, Elon Musk, or Larry Ellison. Would the existing corporate processes, procedures, and business models crush their innovative talents, or would they steer the large companies into a new renaissance?

The economic environment. So, how much of signaling (hiring only by resume qualifications) is influenced by the economic environment? One could assume that in a period of low unemployment, it will be easier to get a traditional job, which would lead to fewer startups and explain why great companies are often founded during a downturn. Those who can’t get a traditional job start their own venture. Yet other public policies come into play. Between the late 1930s and the 1970s, the U.S. tax rate for individuals making over $100,000 was 70 percent and 90 percent (taxes on capital gains fluctuated between 20 percent and 25 percent.) Venture capital flourished when the tax rates plummeted in the late 1970s. Was entrepreneurship stifled by high personal income taxes? And did it flourish only when entrepreneurs saw the opportunity to make a lot more money on their own?

Leaving big companies. Some new ventures are started by people who leave big companies to strike out on their own – meaning they weren’t trying to find employment in a corporation, they were trying to get away from it. While starting your own company may look attractive from inside a company, the stark reality of risking one’s livelihood, financial stability, family, etc., is a tough bar to cross. What motivates these people to leave the relative comfort of a steady corporate income and strike out on their own? Is it the same reason – their company doesn’t value their skills for innovation and is just measuring them on execution? Or something else?

Entrepreneurial education. Is entrepreneurship for everyone? Should we expect that we can teach entrepreneurship as a mandatory class? Or is it a calling? Increasing the number of new ventures will only generate aggregate wealth if those who start firms are truly more productive as entrepreneurs.

[A version of this story originally appeared on the author’s own site.]