The ICO mania we saw last year escalated rapidly. The ICO that signaled to me that things were about to get out of control was the Gnosis raise in April.

The company’s concept of a decentralized prediction marketplace made a lot of sense to me. What made less sense to me was that it was able to raise $12.5 million in 15 minutes. And what made no sense to me at all was when Gnosis’ valuation hit $300 million. If I recall correctly, it even hit $1 billion at some point.

Then Brave’s Basic Attention Token raised $35 million in 30 seconds at the end of May.

Then, in June, Bancor said, “I see you and raise you,” bringing in a then-record $153 million in three hours.

At that point, all bets were off, and the ICO floodgates were officially open, leading to Filecoin and Tezos’ $200+ million raises.

And there’s been a lot of concern that, after their huge ICO fundraises and with no contractual obligation to deliver a product, founders would have little incentive to stick around and do the hard work. But we’re now one year in, and it’s heartening to see that real, meaningful products are shipping.

I love the concept of Brave’s Basic Attention Token (BAT). If you’re not familiar with it, it’s a token that lets users pay micro-fees, in BAT, to their most-used or most-liked content sites. The idea of paying sites directly for the level of interest you have in their content seems like a great counterbalance to the last 150+ years of letting them sell your attention to advertisers, which Tim Wu documents beautifully in his book, The Attention Merchants.

My challenge with the BAT is that it requires all of us to use Brave‘s ad-free browser, which most of us do not use. I have it installed on my machine, and I use it for specific occasions where I feel I really want privacy (I’m not even sure I totally trust Chrome Incognito mode). Beyond privacy, Brave’s other selling point is that, without any ads to serve up, it promises faster browsing speeds.

Brave’s CEO is Brendan Eich, by the way, who invented Java Script and cofounded Mozilla.

Now, Brave had a head-start over most of 2017’s ICO companies. It debuted the first iteration of its browser back in 2016, well before its ICO. Still, one year post-ICO, the company continues to deliver.

As an example of what it can do, the other day, I saw a (very depressing) article in my Facebook feed, so I clicked through to the Forbes page. I was greeted by this:

I whitelisted and went on to get this:

Then, I decided to copy the URL and use Brave, which got me this without any warnings: 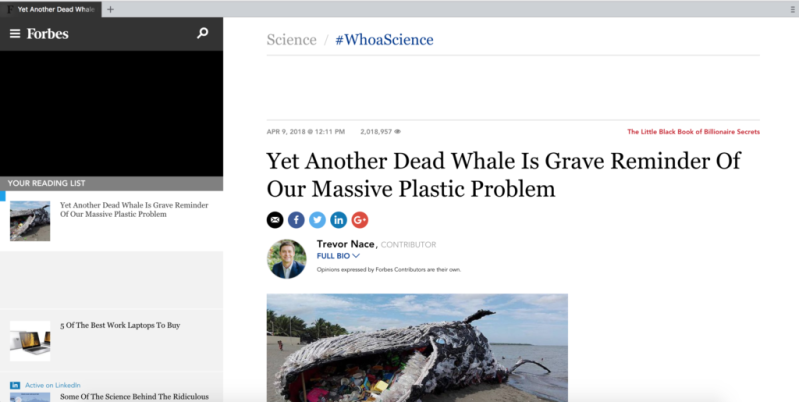 As you can see, Brave removed the 35 pieces of data/ads that Forbes was pushing on me. The result is a faster browser experience.

Brave’s initial effort is to drive browser adoption through great experience. Then it plans to move on to a model where you are paid to watch ads based on the criteria you set. It will of course continue to let users send micro-payments to the sites they use most. You may not want to pay $19.95 per month for access to Forbes or the Economist, but you might be willing to pay $.01 for an article with no ads.

There’s a long way to go from here to there, but it’s great to see Brave making positive strides with a live product that works really well.

Bancor is a case study in not rushing to judgment in the crypto space.

[Disclosure: I own less than $1,000 in Bancor tokens in order to use its platform.]

The project’s beginning was a bit rough. There were some issues with the ICO, primarily due to the Ethereum network getting bogged down from the amount of traffic. Also, because the approach was so novel, many people had difficulty understanding the proposed solution in the whitepaper. After the ICO, the project was challenged by a leading researcher in the crypto space, but Bancor’s world class response was the stuff of PR legends. In my mind, it was a crisis management case study. Still, early on, many in the crypto space hadn’t reached a conclusion about the project either way.

But the tide is really starting to turn in Bancor’s favor.

The team has demonstrated the ability to deliver both at the protocol and at the app layer. What’s more, the concept behind the innovative token is starting to gain acceptance and adoption. Bancor is currently the #1 decentralized solution for token conversions by volume, surpassing IDEX and EtherDelta.

I had the opportunity to chat with Eyal Hertzog, one of the cofounders, for about two hours. I couldn’t help but be impressed with the depth of his thinking and the way he was attacking the problem.

Centralized cryptocurrency exchanges are inherently risky, as we have learned time and time and time and time again. With a centralized exchange, the private keys that make everything possible in a blockchain-based world are held not by the individual customer but by the exchange itself. It’s like Equifax but using real money instead of “just” your information.

Slightly more secure are decentralized exchanges such as EtherDelta and Oasis Dex, but they have all kinds of issues as outlined in  “Front-running, Griefing and the Perils of Virtual Settlement (Part 2),” written by a cofounder of 0x protocol. The basic issue is that (as we saw with the BAT token sale) someone can pay more in gas to make their transaction and thus get their transaction submitted ahead of everyone else’s (which is especially problematic in ICOs, where limited tokens are available, and in trading).

0x championed a solution to this problem by building an entire protocol around relays instead of contracts. You can read more about that here. Given the issues centralized exchanges are having, it is not surprising to see Ox’s network traffic pick up and projects such as Radar Relay building on top of the platform.

But even those decentralized approaches have a core challenge; namely, “the coincidence of wants.” Simply put, if you want to sell a share of Apple or IBM, there needs to be another person who wants to buy it at that time. If there isn’t, the market doesn’t have liquidity and you are stuck.

Bancor’s innovation is a smart token that aims to solve all of this. The basic idea is that, instead of trading with another person, you trade against a basket of tokens that algorithmically changes the price based on supply and demand.

Bancor is processing over $10 million worth of transactions daily and is supporting an ever-growing list of tokens. Keeping with its proven ability to ship, it recently released an improved and upgraded user interface. 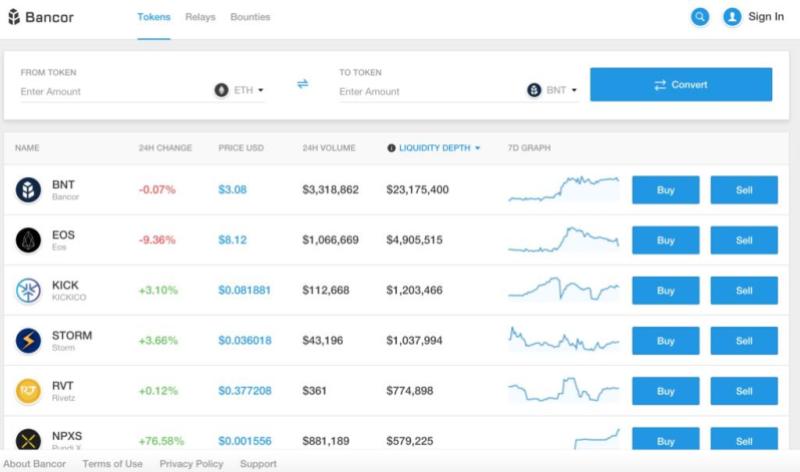 Stefano Bernardi, who writes what I consider to be the best newsletter in crypto, Token Economy, had this to say: “I must admit that I gave Bancor a lot of shit, mostly because of their (at the time) insane ICO  —  but I’ve been impressed with the execution. What they’ve built is a super interesting alternative to decentralized exchanges.”

With the listing fees for centralized exchanges going into the seven figures, in some cases with long delays, it is not surprising to see many project founders turning to Bancor. They can provide liquidity to their existing token holders and, as they build out their projects, give others an opportunity to participate quickly and easily.

Not quite fully live yet and still in beta is the decentralized prediction market leveraging Gnosis, called Olympia.

Over the course of December, the company ran a two-week test across 22 predictions ranging from 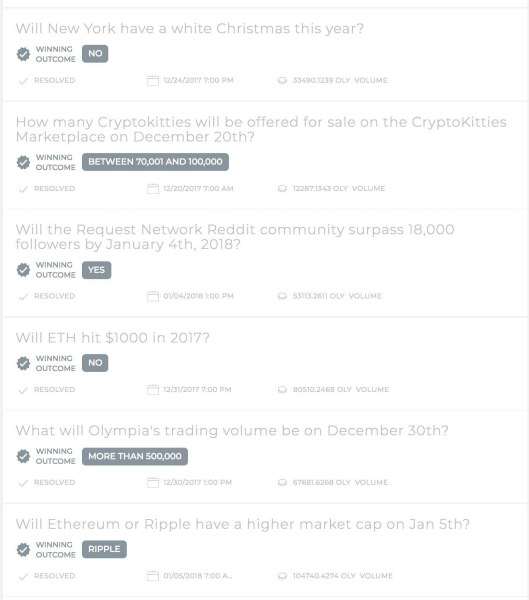 The good news here as well is that it works.

The idea that we will soon have a fully functioning decentralized prediction market that can’t be manipulated by a central authority is pretty appealing.

While the SEC and others have been clearing out the scam projects and regulators are cooling the market a bit (which is ultimately good), we are seeing more and more of the first wave of ICOs start to deliver. Golem, for example, another of the early ones to market, just launched its beta on the Ethereum MainNet. It took the company 1.5 years. Another early ICO, Storj, has 40 petabytes of data on its decentralized network with over 150,000 nodes around the world.

Back in January, I suggested 2018 would be the year that “sh*t gets real.” It’s exciting to see the real work getting done now, particularly while so many people are afraid of the crypto market.

We’re currently in a relatively quiet time. This is the lull following the funding frenzy of November/December of 2017 when the infrastructure and apps are getting built. In a year or so when these projects are truly ready for prime time, people not following this space will be asking themselves, “hey what happened?”

The answer will be, “Some of those ICO guys were scammers. But some were not — they took the money and did what they actually said they were going to do. Now it’s here.”

Special thanks to Omri Cohen and Brian Brown for reviewing this article.