There’s an oft-cited statistic that 75 percent of all U.S. venture capital goes to just three states: New York, California, and Massachusetts. When three states take up such a large portion of the $84 billion that was invested in venture capital last year, signs of progress taking place in other states or cities — the close of a new $50 million seed fund, or a $100 million round raised by a local startup — might get overlooked.

To provide a more granular view of the national funding landscape, St. Louis venture capital firm Lewis & Clark Ventures today released its annual “Between the Coasts” report. The report found similar venture capital trends in the regions between the coasts as those in Silicon Valley: The number of venture capital deals being done continues to fall on a year-over-year basis, but the average amount of money startups raise in a round continues to rise. Additionally, the number of new venture capital funds raised in all parts of the U.S. fell slightly from 2016 numbers.

Using data from PitchBook, Lewis & Clark Ventures examined trends in deal flow, deal size, number of exits, the valuation of these exits, and the amount of money raised by new venture capital funds in three region: the West Coast, the East Coast, and the “Between the Coasts” (BTC) region. The map below shows which states Lewis & Clark Ventures included in each region, but generally speaking, the states that border the Pacific Ocean are included in the West Coast region, while those that border the Atlantic Ocean are included in the East Cast region. Every other state falls in the BTC region. 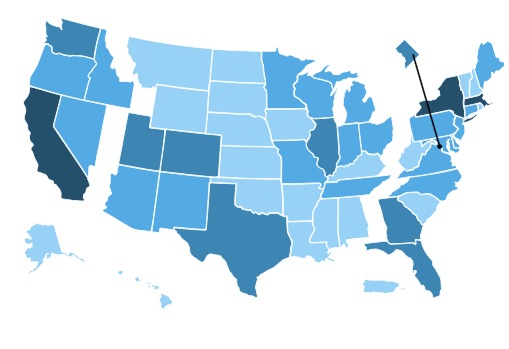 Additionally, while the median size of new funds raised is rising in the BTC region — up to $25 million from about $10 million in 2012 — so is the median-sized fund on the East Coast and West Coast, and at a much larger rate. Here’s a look at the change in new fund size over time, in millions.

However, as more startups on the West Coast stay private longer, local investors may want to consider looking east. The report found that the lion’s share of the startups that were either acquired or went public in 2017 are found on the West Coast — 374 compared to 339 on the East Coast and 187 in the BTC region. However, that number is falling much more quickly year-over-year compared to the number of startup exits on the East Coast and West Coast.

The report shows that funding disparities will continue between the coastal and BTC regions for the foreseeable future. That doesn’t mean startups in the BTC regions can’t raise impressive venture capital rounds or exit successfully — the report notes some sizeable funding rounds by BTC startups in 2017, including $180 million rounds raised by Utah’s Qualtrics and Domo, and $117 million raised by Chicago’s Uptake. Meanwhile, Denver’s SendGrid went public with a valuation of $805 million. The takeaway is that the BTC region shouldn’t be judged solely on the basis of venture capital disparities.