Fat Lama, a marketplace that lets you rent out just about anything you don’t need, has raised $10 million in a series A round of investment led by a new U.K.-based venture capital fund called Blossom Capital, with participation from Atomico and previous investor Y Combinator.

Founded out of London in 2016, Fat Lama is one of a number of marketplaces that allow people to monetize their possessions — such as bikes, cars, or homes. In the case of Fat Lama, its peer-to-peer (P2P) marketplace allows users to rent out just about everything (within reason), from cameras, drums, and drones to DJ equipment and video games. 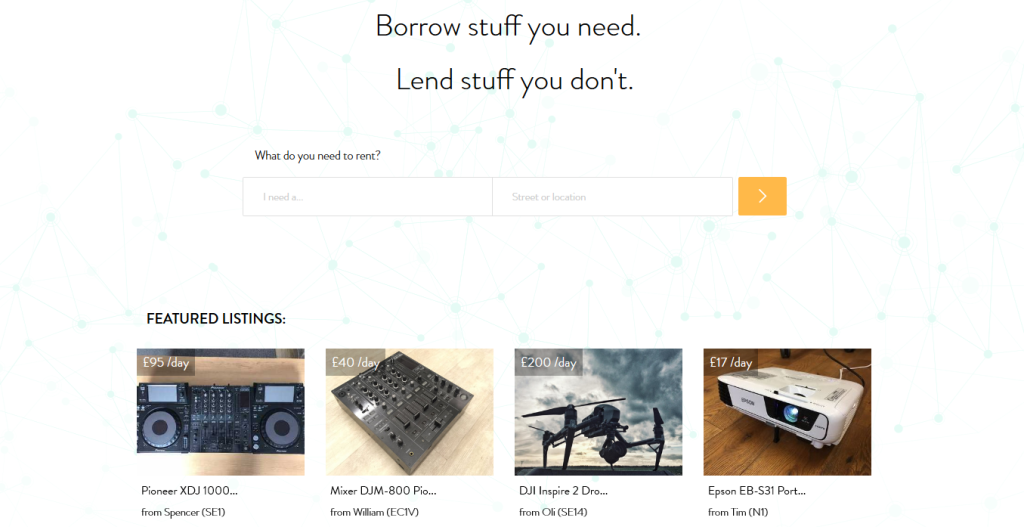 Fat Lama had previously raised around $3 million in funding, and with another $10 million in the bank the company said it plans to grow its team and expand its operations in the U.S. After having already rolled out across much of the U.K., Fat Lama launched in New York back in January, and it will now look to hire city-specific managers as it pushes out across the U.S. The company said it is growing 3 times faster in the Big Apple than it did in London, adding that some renters on the platform are earning as much as $10,000 each month.

Additionally, Fat Lama insures every rental on its marketplace for up to $30,000, which is crucial in terms of convincing users to lend their more expensive items — the kind of goods that are more likely to attract interest due to their prohibitively high purchase price.

While Fat Lama taps a broader tech trend that has seen marketplaces skyrocket across countless industries, including home-sharing, logistics, buy-and-sell platforms, recruitment, and more, the premise behind Fat Lama — which isn’t entirely new — hints at a broader shift toward “access over ownership.” This is something we’ve seen elsewhere, for example in the music industry, where streaming now trumps downloads.

“As consumers, we’re becoming less and less interested in owning things,” noted Fat Lama CEO Chaz Englander. “At Fat Lama, we believe that one day, actually owning those things we only occasionally need will be as ridiculous as buying a house every time you want to go on holiday. People can enjoy using items without the financial burden or environmental implications of owning them.”

Fat Lama has attracted some notable investors in addition to the trio that banded together for this latest series A, including Greylock Partners, Gmail creator Paul Buchheit, and Zynga cofounder Justin Waldron, who all plowed seed investment into the company. Y Cominbator and series A lead Blossom Capital also previously invested.

“Fat Lama is truly transforming the way that consumers think about ownership,” added Blossom Capital founder Ophelia Brown. “It’s impressive how strong their brand is in the market — rarely do we see this at such an early stage in a company’s life.”

One very important question remains, however. Why call your company after a rotund mammal genus commonly found in South America? Turns out it mainly comes down to memorability, in keeping with the advice on being remarkable from Seth Godin’s Purple Cow book. You don’t really get fat lamas in real life, so the brand is likely to stand out.