Dosh, a fintech startup that enables brands and retailers to market to consumers through cashback offers, has raised $44 million in a series A round of funding from PayPal and Goodwater Capital, as well as other unnamed institutional investors.

Founded out of Austin in 2016, Dosh lets users register a bank card with its mobile app. Then, whenever they use that card to purchase goods from one of the stores or restaurants in Dosh’s network, the app doles out hard cash. Dosh works with major brands, including Nike, Target, Marriott, Papa John’s, and Walmart. It’s an effective system, in principle, one that encourages customers to not only shop with a specific brand but to keep coming back.

Dosh promises to help merchants double down on customer loyalty, acquire new customers, and entice them to buy more stuff. As you can see here, Dosh shows which outlets offer cashback in brick-and-mortar stores nearby and online, and you can see a real-time view of your digital wallet and cashback offers — these can be withdrawn as cash directly to your checking account or PayPal or used as a charity donation. 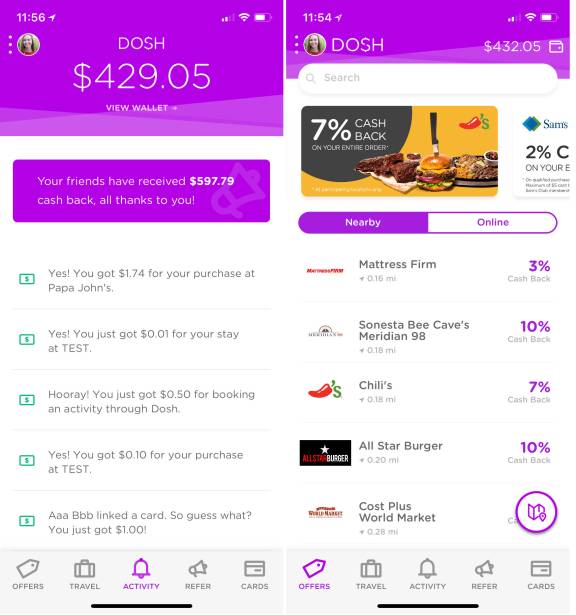 Dosh also works with hotel reservations, providing an interface that allows users to book accommodation directly through the app and receive a cashback offer later. 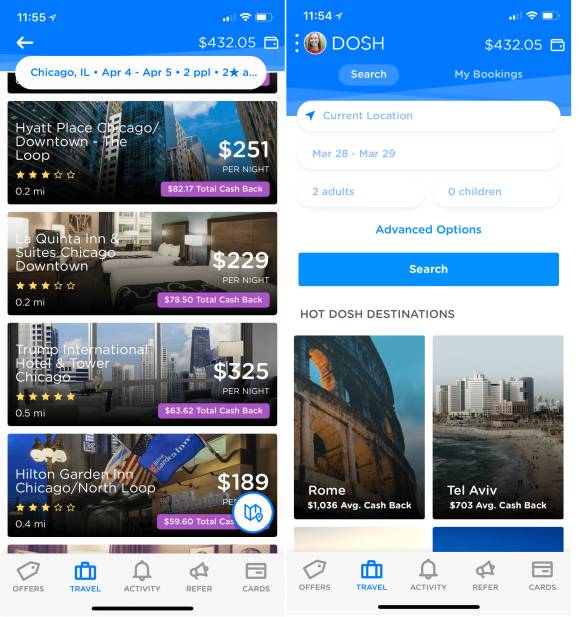 Dosh works much like traditional loyalty programs, insofar as it provides merchants with valuable consumer data that can be used to target customers with offers at opportune times directly through their phone. That is the major trade-off, of course — if you’re happy to have your shopping habits profiled in this way to make back a few bucks down the line, then it’s all good. Data is a valuable currency, and that is what you’re giving up when using a service such as this. Retailers want your repeat business, of course, but they also want to know more about you so they can encourage that repeat business.

But why run cashback schemes as opposed to discounts, which would benefit the consumer at the time of the transaction, rather than later? Doesn’t it make just as much sense to offer a 7 percent discount at the point-of-sale as it does to give 7 percent back at a later date? Well, according to Dosh CEO Ryan Wuerch, there are good psychological reasons behind this.

“When you get a discount, you don’t typically give it much thought,” he told VentureBeat. “Research shows that when consumers pay for something and then automatically receive cash when they weren’t expecting it, a positive stimulus gets triggered neurologically. That stimulus creates a behavioral connection to the merchant that gets them the positive stimulus.”

So cashback allows brands to spark a positive affiliation in the consumer, and the data this interaction generates allows them to see what impact the cashback offer has on future transactions, which should mean a higher return on their investment.

Prior to now, Dosh had raised around $18 million, and with another $44 million in the bank the startup plans to expedite product development and boost its “technical capabilities,” according to a statement. So that’s north of $60 million in funding for an app that only launched last year.

“The support from our new and existing investors means we can continue to accelerate our vision of moving billions of dollars to millions of people,” Wuerch continued. “We are focused on creating the leading financial services platform for brands and merchants to connect directly with their consumers. With this additional funding, we can continue hiring the highest-caliber employees and rapidly growing our customer base and merchant partners.”

The cashback concept is nothing new, with the likes of Yelp rolling out a similar program a couple of years ago. Dosh actually runs on the same Empyr rewards network as Yelp’s program and others, which means if your bank card is already linked to another of those programs, you won’t be able to use that card with Dosh.

While Dosh hasn’t revealed its overall user numbers, it did say that in the past four months it has drawn in more than 3 million new customers, with “tens of thousands” of new merchants joining, too.

PayPal has invested in a number of fledgling fintech startups in recent times, plowing cash into at least eight companies last year alone, including Raisin, Raise, Simility, and microinvestment platform Acorns. Indeed, PayPal and Acorns announced a deeper integration in November, a feature that allows PayPal users to manage their Acorns investments directly through the PayPal app.

So perhaps we shouldn’t be surprised if PayPal and Dosh were to become a little cozier further down the road.