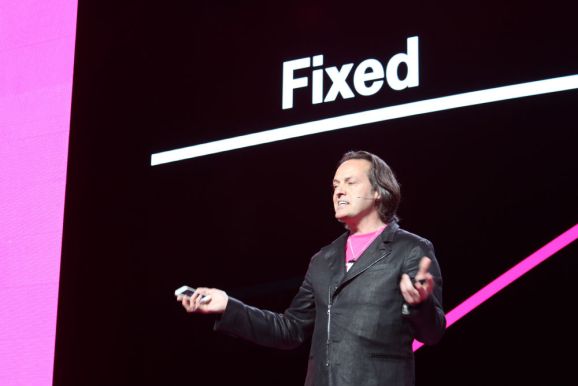 Most reports on T-Mobile’s acquisition of Sprint have focused on the size of the $26 billion deal and the fact that two smaller, weaker rivals will finally combine to become a viable Verizon/AT&T challenger. But as VentureBeat’s 5G expert, this deal has struck me for months as virtually necessary for the companies. Despite their blustery promises, I haven’t been convinced that T-Mobile or Sprint was fully ready for the coming battle over 5G. Based on what I’ve heard over the past day, though, I think the merged company and its customers are going to be in great shape.

At the same time as headlines have been dominated by international “race to 5G” excitement, the past several months have revealed widespread questions over the realities of 5G network building. Carriers throughout Europe and Asia have openly questioned whether they can initially afford to build 5G networks or commercialize new services to justify the investments. The governments of China, South Korea, Canada, and Australia have become involved in coordinating 5G network buildouts to cut waste and speed deployments for carriers. It’s clear that rolling out 5G is not going to be easy for smaller players, and even some big ones.

Neither T-Mobile nor Sprint was in an untenable position to move forward, but despite their individual claims that they would offer true nationwide 5G networks before AT&T and Verizon, they had a lot left to execute on.

Prior to the merger announcement, each company shared plans to go in a different direction on 5G from the broader industry. T-Mobile chose to focus on a low-frequency 600MHz 5G network, while Sprint said it would build a midband 2.5GHz 5G network, because the companies already owned the necessary U.S. radio spectra to start there. Now the companies plan to move forward with 5G on both 600MHz and 2.5GHz bands, while rivals — and carriers around the world — are planning 5G services primarily on high-frequency 28GHz millimeter wave and midband 3.5-3.9GHz ranges.

It’s unclear how this will play out with 5G hardware manufacturers, but the antennas inside T-Mobile and Sprint 5G devices may be very different from the ones in AT&T and Verizon 5G devices. This could go very well if millimeter wave proves problematic, or very badly if handset manufacturers don’t want to waste 5G engineering resources catering to T-Mobile’s particular needs. The major incentive to participate is the new T-Mobile’s size: 127 million customers, versus AT&T’s 141 million and Verizon’s estimated 150 million. That’s enough customers for major manufacturers to care about, and it’s certainly easier than making two separate phones for two separate networks.

Under the best circumstances, the 5G service offered by T-Mobile and Sprint is expected to be slower than their rivals, but also more widely available, particularly in historically underserved areas. It may also do better indoors than 5G based upon millimeter wave.

For engineers and customers alike, it’s not just supported radio frequencies that are important to 5G — it’s their ubiquity. Right now, AT&T and Verizon have each committed to early 5G rollouts in only handfuls of cities, leaving most of their customers to fall back on 4G networks until 5G becomes available in 2019 or 2020. If a particular new service depends on 5G, such as connected autonomous cars, it won’t be available to a carrier’s customers in a given market until a carrier specifically built 5G towers there… which could be a problem for something as mobile as a car. If T-Mobile and Sprint hadn’t agreed to merge, their limited individual abilities to reach thousands of cities would have really inhibited their “national” 5G rollouts, and thus the viability of 5G-dependent mobile services.

Integrating the companies’ legacy networks also could be challenging, because they’re not entirely compatible with one another. Sprint has built a mediocre 4G network backed by unpopular CDMA technology. T-Mobile has built a pretty good 4G network backed by GSM technology, but with significant coverage gaps that customers have to fill with in-home signal boosters and personal cell units.

In an ideal world, T-Mobile and Sprint would be able to combine their existing networks together with a flip of one switch, giving customers access to whichever towers they happen to be near. But between radio frequency differences, CDMA and GSM differences, and various network engineering and device testing challenges, the reality of bringing their resources together is a lot harder than that.

The only possible good news is that these companies have been talking about merging for so long that their executives and engineers have surely been contemplating integration for a while. Perhaps they have some measures ready to go if and when the merger is completed. But based on past history, I’d be willing to bet that T-Mobile is strongly considering just weaning Sprint customers off of their CDMA devices in favor of more broadly compatible GSM hardware. That will leave only Verizon to fly the CDMA flag in the U.S., a situation pretty much no one will cry about.

Like every company planning a potentially contentious merger that will require government approval, T-Mobile is framing its acquisition of Sprint as great for competition. “Existing T-Mobile and Sprint customers will benefit from increased speeds, coverage, and performance as the two companies’ networks combine,” the company said. “This isn’t a case of going from 4 to 3 wireless companies. There are now at least 7 or 8 big competitors in this converging market.” It also claims that the merger will create, rather than eliminate, jobs.

Although I normally see these sorts of post-merger promises as unlikely to prove accurate, I generally think T-Mobile is correct here. Sprint has been a weak competitor for a long time now, and its overall contribution to the U.S. cellular industry has been at best a small tug in the direction of lower prices. But given the mediocrity of its 4G network, all of its bigger rivals knew that they didn’t really need to match Sprint’s offers because they were providing superior customer experiences. Sprint all but had to give away 4G service to retain customers, and when the company contemplated 5G, it openly said that it would need to raise prices to its competitors’ current levels.

With Sprint gone, its performance-conscious customers are likely to be equally or better serviced by T-Mobile, which has exerted meaningful price and network pressure on larger rivals. Its most price-conscious customers will still have entirely viable options like Cricket and Virgin Mobile. The T-Mobile and Sprint retail locations worth preserving will likely see an uptick in customers and, based on T-Mobile’s generally good network and customer service track records, greater overall satisfaction.

I’m excited about this merger, which seems long overdue and hopefully won’t be held up unduly by regulators. Given the massive transformations 5G is about to unleash on the connected world, shoring up the U.S. cellular industry with three equally strong and viable competitors could hardly come at a better time. We’ll be keeping our eyes on every major development as the T-Mobile/Sprint merger process continues.