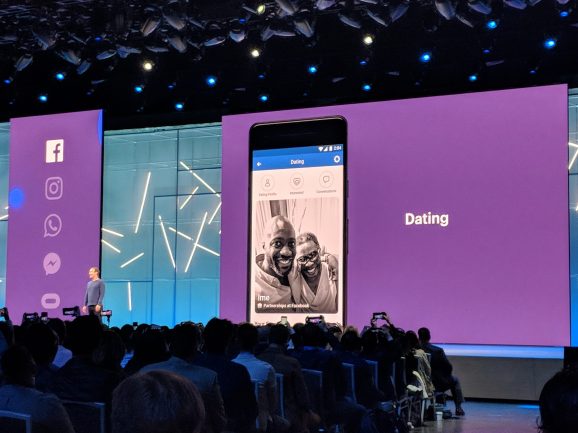 “This is going to be for real long-term relationships, not just for hookups,” Zuckerberg said onstage at F8, Facebook’s annual developer conference being held today and tomorrow, May 1 and 2, at the McEnery Convention Center in San Jose, California.

Also announced today: Facebook’s wireless VR device Oculus Go on sales for the first time, augmented reality is coming to Facebook Messenger and Instagram, and a “Clear history” tool was introduced for users concerned with sharing their activity with the social media giant.

Dating profiles can be created by tapping the heart icon at the top right-hand corner of your user profile.

Users will have to opt in to create a dating profile and to be seen by people around them. Dating profiles only share a user’s first name. Users will also have the choice to unlock their dating profile for nearby groups and events in order to meet people with similar interests.

“We like this because it mirrors in the way that people actually date, which is usually at events or institutions they know,” chief product officer Chris Cox said.

Dating matches can chat and send text-only messages in a chat experience that does not connect with Facebook Messenger or WhatsApp.

“We hope this will help more folks meet and find more partners. We’re excited to share a lot more on this in the next few months,” Cox said.