Steve Ballmer has gone from being the biggest Microsoft cheerleader to the world’s most enthusiastic owner of a sports team. He retired from Microsoft in 2014, but then he became the owner of the LA Clippers NBA basketball team in a $2 billion deal.

Since that time, he and his wife Connie have become active philanthropists, launching economic mobility and anti-poverty programs across the U.S. with a $60 million program via the Ballmer Group.

“I loved running Microsoft, but basketball is a whole different notion,” Ballmer said, speaking with Michael Milken, head of the Milken Institute, at the Milken Global Conference in Beverly Hills today. “The burst of adrenaline you get is really different. Boom. Every 24 seconds. Did we score? Boom. Did we win? Sports has a high accountability culture. In software, you assign someone to fix a problem. In business, we say we’ll get to it tomorrow. In sports, it’s just over.”

With the Clippers, Ballmer hasn’t had an easy time. It’s not a winning team. And it lives in the shadow of the Los Angeles Lakers.

“We got a little of that Avis-Hertz thing,” he said. “We try harder.”

That’s one reason that Ballmer wants to build a new basketball arena for the Clippers in Los Angeles, rather than just use Staples Center, the home of the Lakers.

“We’d like our own home,” he said. “Staples Center was built in 1999. Modern arenas are not built the same way. And we can make money building an arena.”

In philanthropy, Ballmer remains a numbers guy, like he was at Microsoft. Last year, he created a 10-K document for the government, dubbed USA Facts, to teach people about things like the federal deficit and where our budget dollars go.

“We focused on facts,” Ballmer said. “It’s like looking at a 10-K for business. If you want to make a decision about something, you need the numbers. You can’t just say ‘spend more on educational spending’.”

He sees the sports team and the anti-poverty programs as connected in a way, as often the athletes grow up in impoverished neighborhoods with only their basketball skills to lift them up. The team works with athletes on life skills through the “player development” resources at the Clippers.

On his StriveTogether program for kids, he said, “Our focus is on giving kids in disadvantaged circumstances a better opportunity to move up economically.”

With the education system, Ballmer has been trying to drill into the numbers and look at details such as teacher quality, stability in the homes of children, the availability of food, safety in the neighborhoods, housing conditions, and more.

Milken noted that the high school graduation rate in the U.S. has gone up from 71 percent in 1998 to 82 percent in 2013, but reading and math proficiency has remained fairly flat.

“We lowered standards to get there,” Milken said.

Ballmer said he hoped to make an impact in early childhood education, but he wanted to track progress through the end of high school as well as the end of college. Ballmer said he is talking soon with the National Association of Government Auditors.

“I’m fired up for the opportunity,” he said, pounding his fist on a table. 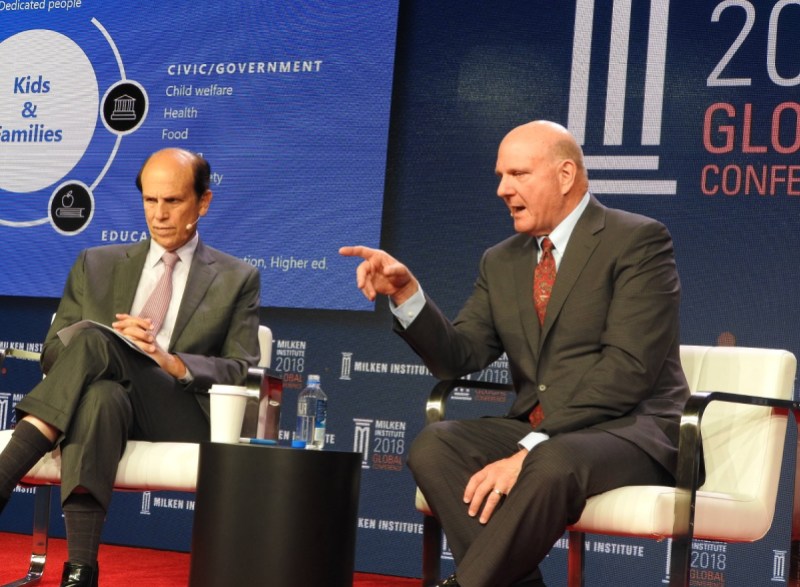 Above: Steve Ballmer (right) has become a anti-poverty philanthropist and sports magnate.

Ballmer said his father was an immigrant from Switzerland. He was an interpreter for the war crimes trials in Nuremberg, and he got a job and a chance to immigrate through his language skills. He said his father moved from job to job in the U.S., as a hotel lobby receptionist, a payroll clerk, and an assembly line worker until he was able to get to a mid-level job at Ford. His relatives on the other side of the family were Jews who had to escape the pogroms in Eastern Europe. His grandfather started in junk.

Milken interjected it wasn’t junk bonds, where he had his start. Milken said that growing up he was affected by the Watts Riots, where he wondered why, “in a city of dreams, is Los Angeles on fire?” He went on to become the “junk bond king” and made a huge fortune.

But Milken was indicted for racketeering and securities fraud in 1989 in an insider trading investigation, and he pleaded guilty to securities and reporting violations. He was was sentenced to ten years in prison, fined $600 million, and permanently barred from the securities industry by the Securities and Exchange Commission. His sentence was later reduced to two years.

Since that time, he survived prostate cancer and became a medical philanthropist. He has been running the Milken Institute think tank since 1991, and he holds the institute’s annual conference in Beverly Hills. The event draws 4,000 investors and other VIPs, including various heads of state.

Milken quizzed Ballmer for an hour, and he closed with a question on Ballmer’s view of technology.

“I think the future of tech to positively impact our world is underestimated and over-feared,” Ballmer said. “Articles about automation talk about how it will get rid of jobs. The pattern has been automation lifts all boats. With appropriate privacy, if you can help a kid from cradle to career, to use data, to impact education, you will have a better outcome. The tech is there. How do you apply it and apply it better?”

He added, “I see tech having an incredible impact on everything, very positive. People talk about AI. We talked about that for years. The notion tech can enhance human creativity and productivity is stunning. It could be a lot of fun with next-gen virtual reality games. We’re looking at that with the Clippers, to show you what the view looks like if you’re the athlete in the center.”