Spotify may be offering a lesson about the downsides of the unconventional approach it took to its IPO earlier this year. After several weeks of relative calm, the company saw its stock price plummet as investors appeared spooked by the results of its first earnings report as a public company.

Why? Well, it’s hard to say. By avoiding the traditional trappings of investment banks in favor of a direct listing, Spotify saved a bunch of money. But it also hasn’t attracted the interest of Wall Street analysts, with only two officially registered as following the stock, according to Zacks.

This means that while there is a consensus estimate, the analysts appeared to have offered very different benchmarks. With no guidance, then, investors are drawing their own conclusions about Spotify’s numbers.

Spotify’s results largely seem to track with what executives told investors to expect, but there are still some warning signs.

The company said it had 170 million monthly active users (MAUs) and 75 million premium subscribers. Those numbers were up 30 percent and 45 percent, respectively. But … Premium subscribers were up just 4 million, or 7 percent, from the previous quarter. That would seem to imply a slowing of growth.

And while total revenue was up 26 percent from the same quarter a year ago, it was down 1 percent from the last quarter. Spotify said it was impacted by changes in the foreign exchange rate. But clearly there are some hints that growth may be slowing or stalling. 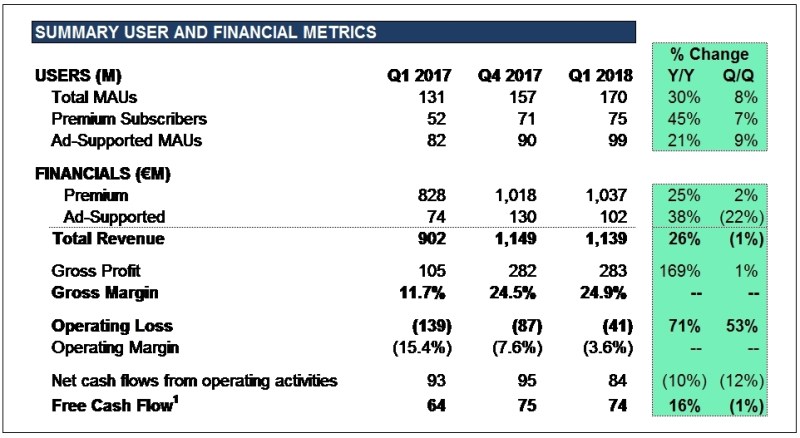 The company did note that its churn rate of premium users fell below 5 percent. And its operating loss fell sharply from both the last quarter and one year ago. However, the company didn’t change its full-year estimates, which include projections of ending 2018 with between 92 million and 96 million paid users.