Traditional venture investing is poised to underperform this year and the years to come for four fundamental reasons:

1. Significant capital inflow into the VC industry while the number of deals is in a steep decline 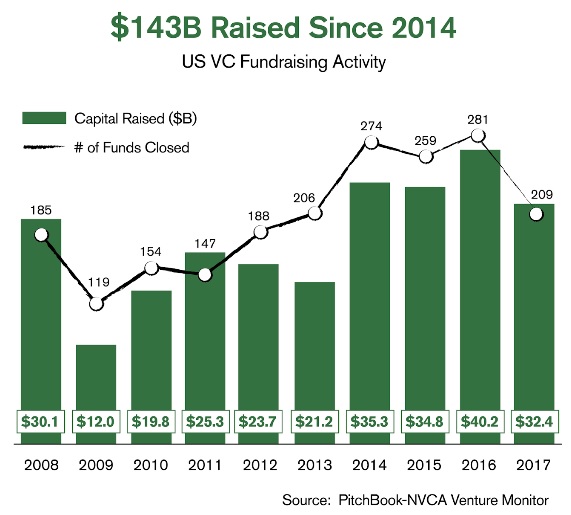 Clearly, the VC industry is taking in capital at a faster rate than it can deploy, which is causing deal value and valuation expansion.

The dramatic flow of capital into the industry coupled with the decrease in number of deals has directly impacted deal size. As money started to flow quickly into the space, deals with $50 million or more began to take up a greater piece of the industry, reaching more than 50 percent in 2017. 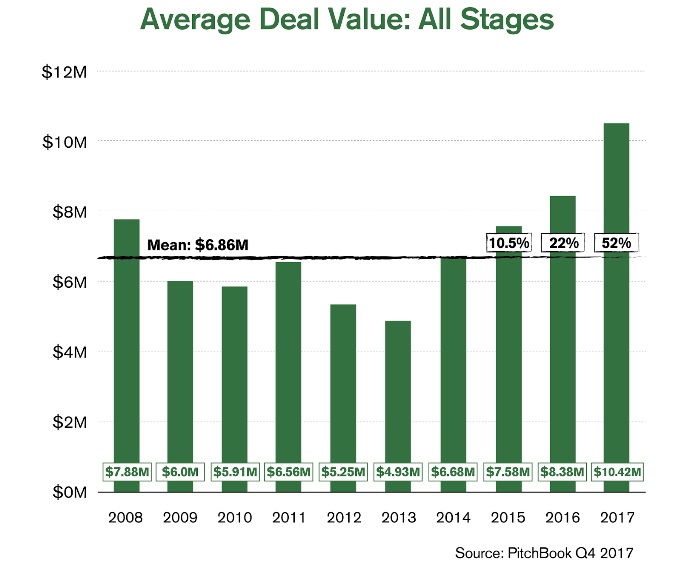 An increase in deal value means more risk to investors as companies have to perform at an ever-higher rate and exits have to occur at higher valuations in order to achieve a desirable return on investment.

As early-stage deals are becoming scarce and the size of deals is growing substantially, what is happening to valuations? According to an annual survey performed by TrueBridge Capital, leading Seed and Series A investors found that:

VCs are stacking the deck on fewer albeit more developed deals, and with more money to deploy, valuations are growing at a similar rate.

The current VC industry is facing a significant supply of capital, concentrated deal flow, all-time high average deal size and, by estimate, pre-financial crisis valuations. At the same time, the number of exits continues to decrease. 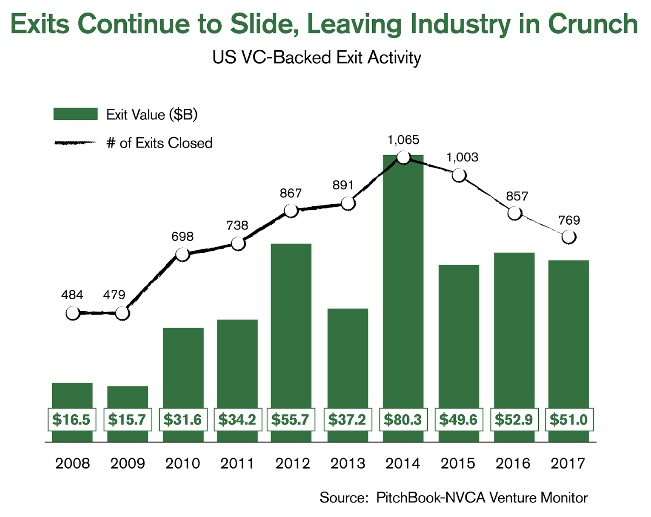 Both exit values and number of exits have retreated to 2012 levels, while capital inflow, deal value, and valuations are at a decade high.

This explains why $19.2 billion was invested in 73 unicorn deals in 2017 — 1 percent of deals took a staggering 23 percent of all VC investments. As exit markets continue to soften, more and more capital is being deployed to keep private deals funded as they wait for their exit window to arrive.

This reminds me of a game of musical chairs: The game works well until the music stops playing.

These four key factors have created a significant fundamental mismatch in the VC industry and are clear indicators that future return for traditional venture is poised to suffer.

Yes, the VC industry is facing an uncertain future, but there is a solution: a “Venture Development” investment model that focuses on early-stage companies with a smaller fund need and a high chance of success. Here’s how it works:

Pursue technologies that have been developed and reinforced by significant investments in R&D at leading research institutions. This approach means less dilution for shareholders as you leverage the billions already invested to develop the technologies through universities, use the current infrastructure of the leading research labs, and operate businesses at a much lower cost structure.

In the Venture Development model, investors should identify disruptive technologies and then thoroughly vet them through a Startup Nursery. If a technology survives the vetting process, recruit talented CEOs and operators to be part of the founding cap table of the companies.

The object of the Venture Development model isn’t to write a check, take a minority passive position, and hope it all works out. Get heavily involved in the launch and operations of the business alongside each company’s management team.

This implies founder level valuation and equity, which is extremely rare. Even Seed rounds can be based on valuations where a 20X or larger ROI can potentially be achieved with average size exits. This makes early stage investing all the more appealing.

3. Focus where few are looking

The Midwest has access to world class technologies, infrastructure, and teams at a fraction of the cost of the coasts. Low costs plus access to talent and tech mean a higher ROI for investors, even in the early stages. More investors are starting to catch on to the innovation coming out of the Midwest, but opportunity still exists in the region.

Yes, build companies to be fast-growing, profitable businesses that can go all the way to become IPOs; but given current exit dynamics, always position portfolio companies in such a way that they can be acquisition targets. Develop companies with a clear “build to sell” focus.

The Venture Development model reduces risk and shareholder dilution while targeting 20x more without the need for mega exits. This model is venture done right and is the antidote to the coming underperformance in traditional venture.

Flavio Lobato is Principal and Cofounder of Ikove Capital Partners. Previously, he was an Executive Director at Liongate Capital Management, a $7 billion alternative investment manager based in London and New York. He was also a founder and CIO of Swiss Capital Asset Management in Lugano, managing over $1.5 billion in hedge fund investments for institutional clients. Prior to that, he was a VP at Goldman Sachs & Co. and a Director at Credit Suisse First Boston. He is a student advisor to the Harvard Innovation Lab (I-Lab) and Co-Head of Fintech for Harvard Angels of NYC.