In Q1 2018, global digital health and healthcare IT funding set a new all-time record for funding in a quarter, and the sector shows no signs of slowing down. This is an area my research firm, Mercom, actively tracks, so I wanted to share a breakdown of our key Q1 2018 findings. 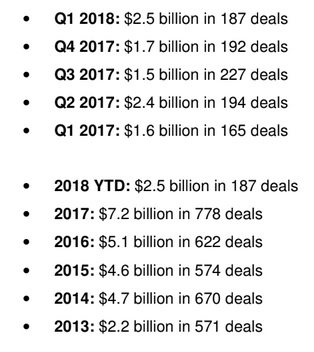 Since 2010, cumulative VC funding in the digital health sector has now reached $28.1 billion in 3,637 disclosed deals.

The record global funding seen during the first quarter was boosted by several large funding deals, with five companies raising over $100 million each. Just the top seven companies alone accounted for $1 billion in fundraising, and the top 10 VC funded companies accounted for almost 50 percent of all funding raised during the quarter.

Data analytics companies continued the trend of being the category with the most funding by raising $679 million during the quarter. A significant amount of funding in the category was generated by genomic data analysis companies.

Other digital health categories that disclosed over $100 million in funding during the first quarter were mobile health apps, with $247 million, telemedicine, with $178 million, benefits solutions, with $160 million, and electronic health records with $146 million.

Another category that had significant funding in Q1 2018 was clinical decision support, with those companies bringing in $516 million. The majority was raised by precision medicine companies focused on genomics-based treatment options and artificial intelligence.

Above: Digital health VC funding by amount (in millions) Q1 2018

And here’s a look at the sector’s top VC investors by deal count:

But while venture capitalists opened their wallets wide to offer record funding to digital health companies during the period, M&A activity declined. Forty-eight merger and acquisition deals were announced in Q1, down from 57 M&A deals in Q4 2017. Year over year, there was a slight decline in activity compared to 49 deals announced in Q1 of 2017.

During the first quarter of 2018, approximately half of the publicly-traded digital health companies beat the performance of the S&P 500 index, which was down 2 percent. The biggest gains were made by Connecture (whose stock rose 83 percent in Q1) and Adherium (which gained 65 percent).

The one IPO launched in Q1 was for Chinese fitness tracker and smartwatch maker Huami, which raised $110 million and listed on the New York Stock Exchange.

M&A activity has lagged in the digital health sector in recent quarters. IPOs have been rare, and Huami’s IPO was the first one announced in the sector since 2016.

With the surge of investor interest in the digital health sector and the record start to 2018, expect to see this fundraising momentum continue.