The Bureau of Labor Statistics released its “Employment Situation” report last week, and it shows the number of job openings recently hit an all-time high of 6.6 million. Relatedly, the unemployment rate fell to 3.9 percent, the lowest level since 2000. At the same time, more workers are quitting their jobs, signaling a strong sense of optimism in employment prospects.

My team at CompTIA analyzed the report to see what the impact has been on the tech sector. We found that eEmployment in the IT services and custom software category expanded by roughly 6,700 positions in April — and 26,800 positions if you count the full first quarter of 2018.

In other tech employment categories, we found: 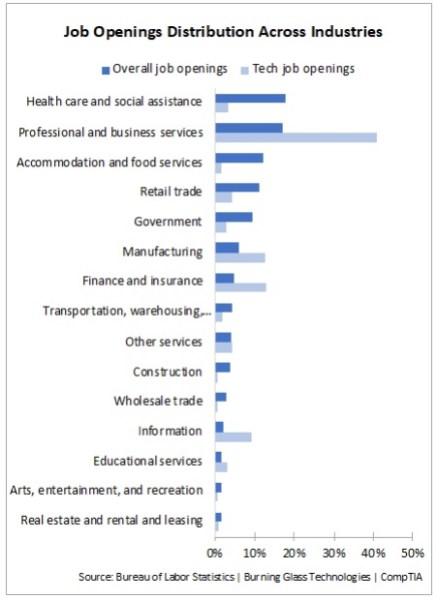 The tech occupations with the most job openings include software developers, IT support specialists, systems engineers and architects, systems analysts, and web developers. Additionally, the number of job postings for emerging tech positions such as AI, blockchain, and IoT increased by more than a third last year.

With the unemployment rate for tech occupations standing at a ridiculously low 1.7 percent, employers must look beyond the status quo to attract and retain tech talent. Here are three strategies to employ today.

Negative perceptions also feed into the confidence gap. Individuals who have the aptitude and drive are sometimes deterred from pursuing a career in tech because of real and perceived barriers to entry.

2. Re-commit to training and professional development

Just about every employer will say their employees are their most valuable assets. Yet investments in training and professional development often fall short of what is needed to maintain a best-in-class workforce. Yes, there is always the possibility that employees will leave after taking advantage of training. However, doing nothing is even riskier. CompTIA research shows most workers seek more training and professional development. The rates are highest among millennial workers, with many indicating it factors into their decision to join a company or not.

With the uncertainty of automation looming, workers are especially keen on staying current with their skills. Training has come a long way since the days of boring classes or awkward training videos. Simulations, virtual training environments, flipped classrooms, AI-based learning assistants, and more provide employers and employees ever-greater levels of flexibility, customization, and business alignment.

Our research found that a majority of 15-year-olds (74 percent) are at least somewhat likely to consider a career in technology. By age 17, the rate falls. This may be a function of changing interests, which is perfectly reasonable; or it could be a function of something problematic. We found that many students lack exposure to quality information and guidance to pursue a career in technology. The de facto four-year college degree is not the right for everyone for cost reasons or because it is often not the best mechanism for preparing an individual for a technology career. We need:

Expanding the tech talent pipeline is often easier said than done. But just because it requires new approaches and effort, it is not an excuse to throw in the towel.

Todd Thibodeaux is president and CEO of CompTIA, a non-profit trade association for the global technology industry.