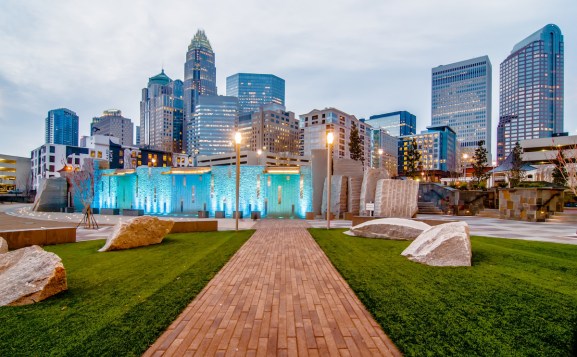 During one of the stops on the Amazon HQ2 roadshow, a team of officials visited Raleigh-Durham in North Carolina seeking to learn more about whether the area was a good fit for the sought-after $5 billion project. According to the Washington Post, one of the items on the agenda was House Bill 2, the 2016 “bathroom bill” decried by many tech companies.

As big tech companies and scaling startups increasingly see the benefits of moving away from the coasts, local leaders must determine what makes their city or state competitive to land these projects. In many aspects, the Southeast is primed to capitalize on both company moves and expansions: A recent analysis showed that many of the cities with the lowest startup costs are located in the South.

However, local leaders in the South are also grappling with challenges. First, there is the question of what exactly startup-friendly legislation is. What will keep entrepreneurs and talent in the South instead of leaving for the coasts, and what will attract entrepreneurs from the coasts to build their startup in the South?

Second, as seen during the HQ2 tour, not all states offer the social policies that startups and young talent demand. In a region that skews conservative — the entire Southeast went red in the 2016 presidential election — attracting progressive-leaning technology companies can feel like push and pull between the voter base majority and members of the tech community, who tend to lean left.

HB2 is a prime example. The bill restricted access to public facilities — specifically restrooms — to that of the sex identified on individuals’ birth certificates. One analysis after HB2 passed projected it could cost the state almost $4 billion in business over the next dozen years. Though North Carolina’s new Democratic governor has passed measures that repealed portions of the bill in 2017, it’s unclear how much economic investment North Carolina potentially lost in that year.

Business and government clash in Georgia

Outside of North Carolina, more than 80 of the biggest tech companies made their objections to the bill very clear, and GV refused to put money into the state until the bill was repealed. In a state where the majority of venture capital comes from outside state lines, it was disheartening news.

Also in 2016, on the other side of the border, Georgia’s Republican governor Nathan Deal vetoed a bill that would have allowed faith-based organizations in the state to deny services and jobs to LGBT people on the grounds of ‘religious freedom’. Amol Naik, a technology policy lawyer who currently serves as a director on the legal team at Atlanta-based MailChimp, believes that this decision was crucial to supporting the subsequent rapid growth of the technology industry in the state.

But policy clashes played out again when Georgia lawmakers denied a previously proposed tax cut to Delta after the airline said it would no longer offer group travel discounts to NRA members. Though Delta has said that it will keep its headquarters — and its 33,000 employees — in Georgia, other states were quick to jump at courting the airline. “Hey Delta — Virginia is for lovers and airline hubs. You’re welcome here anytime,” tweeted Virginia’s governor.

Ultimately, Georgia does have many startup-friendly initiatives to tout — it is home to the country’s oldest state-funded startup incubator and a long-term investment program, Invest Georgia, that backs local venture firms to increase startup capital.

But, amid the Amazon HQ2 frenzy, some experts think that the incident could have hurt Georgia’s chances of attracting the tech giant. Moreover, the yanked fuel tax exemption was intended to help Atlanta’s Hartsfield-Jackson Airport, currently the busiest in the world, compete for flights with other large airports. The access to frequent and affordable flights from Hartsfield-Jackson is one of the top reasons we hear cited for why tech companies like Atlanta, and it’s certainly an asset that should be maintained as Atlanta’s technology scene develops.

Tennessee defines its vision of ‘startup-friendly’

Another southern state, Tennessee, has put institutional entities in place to advocate for legislation to make it the “most startup friendly state in the country.” Charlie Brock, CEO of public-private entity Launch Tennessee, shared in a previous interview with Hypepotamus how Tennessee’s state and city governments are working together to pass the pieces of legislation that they view as most necessary to helping startups thrive.

Established in 2012 upon direction of the governor, Launch Tennessee provides a network of entrepreneur resources, supporting infrastructure and funding that is backed by Tennessee’s Department of Economic & Community Development.

“That vision certainly includes a role for LaunchTN developing, advocating for, and ultimately implementing legislation favorable to startups,” said Brock. These include an Angel Tax Credit passed in 2016 and Small Business Innovation Research matching grants.

Launch Tennessee claims that its programs and resources helped spur a significant growth in venture capital investment in the state — more than doubling from $189 million in 2012 to $428 million in 2016.

Another Tennessee city that serves as a good example of the role that city officials can play in startup development is Chattanooga. In Chattanooga, the city government began exploring ways to attract more innovative companies and talent — something that had historically been a tough sell for a mid-sized city like Chattanooga that doesn’t have a major anchor university.

Following a research task force instituted by the mayor, in 2015 the government announced plans to become the first city of its size to create an Innovation District — a 140-acre area in downtown, anchored by a 90,000 square foot startup hub, research institutions, and entrepreneur support organizations.

One such organization that calls the Innovation District home is The Enterprise Center, a nonprofit funded partially by Chattanooga city government. Ken Hayes, the center’s president, says that the number of startups and scaling companies in the city have increased substantially since the Innovation District’s inception.

“The research shows that when you take as dense an area as you can, and put the Innovation Economy workforce in that kind of area, the impact you’ll see is expansion and growth in a much quicker way,” Hayes said.

According to a Brookings report, the Innovation District model is picking up steam across the country, particularly in midsized cities. In this way, Chattanooga can serve as a model for how Heartland cities can develop, not into the next Silicon Valley, but into their own unique startup communities.

And what’s next for the Southeast? I predict a continued migration of coastal tech companies into the area, drawn by low rents, bright talent, and good quality of life. As these companies — and their employees — move in, it will be interesting to observe whether the voter base in the region also shifts. Clashes like those over pieces of legislation like HB2 may become naturally less common as a result.

Holly Beilin is the editor-in-chief of Hypepotamus, a publication that covers the southern innovation ecosystem.