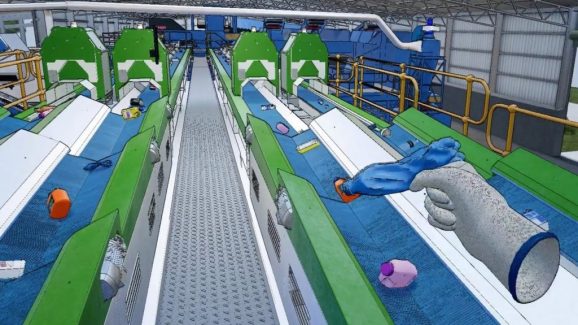 Kids can to sort through the trash at a recycling facility without getting their hands dirty thanks to virtual reality.

Creative Agency Protein One and Rotor Studios this month announced a new app that’s set to educate kids in Australia about the process of recycling. The experience uses the Oculus Rift to teleport children to a recycling facility in Hume to learn about the work done by resource recovery specialists, Re.Group. The piece isn’t comprised of some simple 360 videos, though.

Instead, the app re-creates the entire facility at an exact scale in VR for users to explore. Not only that, but kids will be able to interact with the environment, operating machinery as they play special games that will teach them about how the facility works. Voice over and visual aids help keep the focus on learning the entire time but, like other educational apps such as Operation Apex, the hope is it’s through the activities that kids actually remember what they’ve learned.

The app is now being used at the facilities Recycling Discover Hub. It’s nice to see an app that seems to have put some genuine thought into how to best utilize VR to educate audiences.