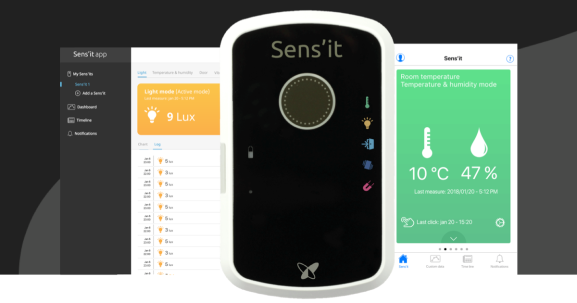 As France’s Sigfox continues to roll out its internet of things communications network around the world, the company is also focused on convincing more users to make the leap into IoT. Today, the company announced a new service designed to make it quicker and easier to develop connected products that use its network.

Dubbed Sens’It Discovery, the service is intended to let various industries experiment with IoT experiences so they can learn about what is possible and hopefully incorporate more of the technology into their basic operations and products. Discovery essentially offers an end-to-end IoT system to get them started.

That includes Sens’it 3, a little IoT gadget that weighs less than 2 ounces and has sensors that detect things like temperature, light, motion, humidity, vibration, and magnets and Sigfox’s communications system to send data remotely. The device connects to the Sigfox communications network, monitors data through the company’s cloud, and then displays the data via a sensit.io application that is being rolled out.

Sigfox, which has raised almost $300 million in venture capital, operates a low-powered communications network geared toward sending tiny packets of information using basic radio technologies. The idea is to allow large volumes of connected devices to send small amounts of data without needing much battery power, allowing them to be deployed in larger numbers over long periods of time.

As Sigfox strikes partnerships with telecom carriers around the world to deploy the network, analysts say the key is to attract people to use the capabilities. The company hopes that Sens’it becomes one more way to demonstrate the potential of IoT by showing how it can be used to do things like secure and monitor facilities or produce insightful data.

The new service will be available in the 45 countries where Sigfox currently operates.