“We’re working with all tier 1 [manufacturers] to develop technology that can be fully integrated into cars,” CEO and cofounder Dr. Maha Achour told VentureBeat in a phone interview. “We expect to begin low-volume mass production in the coming months.”

Metawave’s all-in-one sensor module for self-driving vehicles, which is available in a number of configurations at different price points, comprises a camera, lidar, and a radar. The camera and lidar have a maximum range of 50 meters and 150 meters, respectively. But the multimodal radar, which operates at the FCC-allocated frequency of 77GHz, can detect objects even further away.

Metawave’s proprietary Warlord technology uses a single self-shaping antenna, guided by artificial intelligence algorithms, to steer the signal beam in all directions. By identifying the unique Doppler signatures generated by micro-motions, the sensor can recognize, classify, and track cars, pedestrians, cyclists, road animals, and other potential hazards at a distance, Achour said. And unlike Metawave’s line-of-sight camera and lidar, both of which are susceptible to adverse weather conditions, Warlord can maintain a high level of performance in rain, snow, and fog. 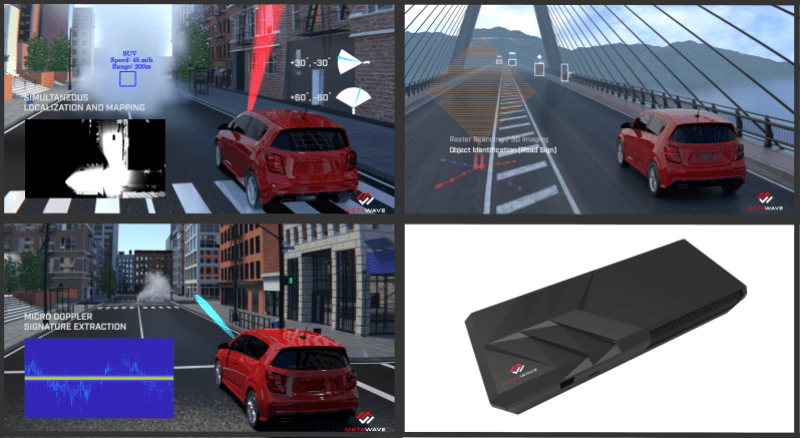 Above: Above: A split-panel view of Metawave’s object detection and collision avoidance systems.

Achour described it as a “five-dimensional” system. “It’s analyzing range, velocity, vertical and horizontal angles, and it’s classifying objects,” she said. “We apply a deep learning approach to that data and build signatures … from the neural engine.”

That gives Metawave’s system a leg up on competing digital beam-forming radars, which are often computationally intensive and struggle to distinguish between distant targets.

Metawave, which spun off from Xerox’s Palo Alto, California-based Parc laboratories in August 2017, has been developing its all-in-one autonomous sensor solution for the past several years. The startup raised $7 million from Khosla Ventures, Bold Capital, Western Technology Investment, Alrai Capital, Motus Ventures, SAIC Motor, and Thyra Global Management in its initial seed round in September.

Unsurprisingly, Achour is bullish on the self-driving car industry.

“The business model — the safety, reliability, and additional applications that [autonomous] cars are going to offer — is going to hasten adoption,” Achour said. “[Lack of] regulation may slow things down, but after some countries start to take a lead and demonstrate the benefit of this technology, there’s no doubt that it’ll take off.”

Metawave is the second startup for Achour, who holds a Ph.D. in physics from MIT and more than 100 patents in metamaterials. In 2006, she founded Rayspan, which commercialized a passive version of the metamaterial technology used in Metawave’s sensor array.