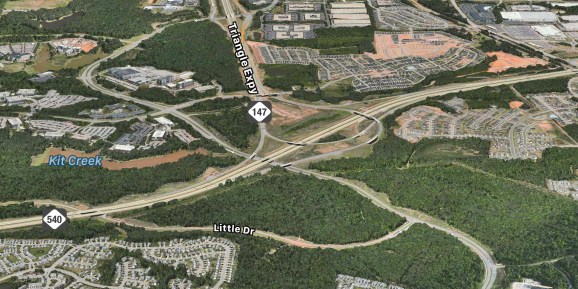 Apple is said to be focused on vacant North Carolina land at the intersection of I-540 and Davis Drive, shown here.

Apple’s new campus may be coming to North Carolina’s Research Triangle Park, according to a report from the state’s Triangle Business Journal. The company is said to be planning a “customer center with room for future expansion on the Wake County side of RPT,” language mirroring Apple’s previously announced plan to “initially house technical support for customers” in “an Apple campus in a new location.”

North Carolina has appeared on speculative short lists of likely Apple campus locations published by Bloomberg and VentureBeat, though more prominently on the latter. The state’s Research Triangle Park region has an appealing combination of qualified personnel, reasonable infrastructure, and government support for an Apple campus. Additionally, Apple CEO Tim Cook is a proud graduate of the state’s Duke University and often speaks highly of his time there.

The Triangle Business Journal reports that the state’s governor and commerce secretary met with Cook while he was in town for a Duke commencement speech this weekend and are currently negotiating with state Senate and House leaders to offer Apple an incentive package. State officials are “keeping quiet,” but sources indicated to the publication that while the deal was not yet final, officials are optimistic. “There’s always a chance we lose out,” a source close to the project reportedly said. “For now, we are comfortable with where we stand.”

Apple is said to be looking at land near the intersection of Interstate 540 and Davis Drive, shown on the map above. The Research Triangle Foundation owns multiple undeveloped plots in the area, notably including a 69-acre parcel that would have ample room for current and future campus development. This land is expressly to be used to lure out-of-state companies to set up shop in the Research Triangle.

A win for North Carolina is expected to bring thousands of jobs with average annual salaries in the $75,000 to $100,000 range, plus benefits to local schools, government services, and the housing market. Though Apple didn’t apply for government incentives when choosing the state earlier for a datacenter in Maiden, the Triangle Business Journal expects incentives “to come into play in a big way” for a campus, providing up to 25 years of grants for companies that commit to creating at least 5,000 jobs and investing over $4 billion in the state.

Apple has not commented on the story and could be conducting negotiations in other areas, as well. A spokesperson for Governor Roy Cooper (D-NC) said “we don’t share information about economic development projects before they are final,” but followed up by adding that he “will be happy to share more if or when an announcement is made.”

Update at 9:33 a.m. Pacific: The Washington Post notes that Apple has “quietly” explored Northern Virginia as a potential campus location as well, though unlike the Triangle report, the timing and depth of discussions between Apple and local officials is unclear. According to the Post,

Economic development officials under Virginia Governor Ralph Northam (D) proposed several sites for the project after Apple representatives said the company was seeking 4 million square feet of office space to accommodate 20,000 jobs, according to officials and real estate executives familiar with the discussions… The sites proposed by Northam’s staff for Apple include office buildings and development sites in Crystal City, privately owned Loudoun County land near the Center for Innovative Technology and the Scotts Run development in Tysons.

The Post report suggests that while Apple could also be considering other areas within or adjacent to Washington, D.C., such as Maryland, city officials were not aware of an attempt by the District to pursue Apple. On the other hand, the paper notes that one of the Virginia sites is managed by an individual with ties to Apple’s earliest retail initiatives. Both Apple and economic development officials from Virginia counties declined to comment on the report.