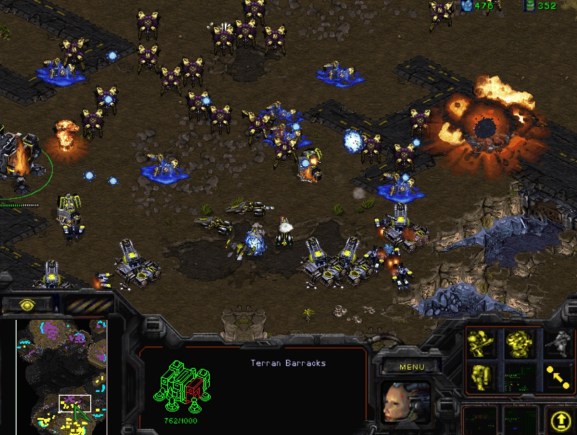 StarCraft: Remastered was one of the esports competitions at G-STAR.

The goal is to explore how AI systems can be trained to react to scenarios it hasn’t been given training data to recognize — to act based on prior knowledge or experience.

Known for short as L2M, the DARPA program announced university participants from academia earlier this month, but SRI International is one of the only known companies to participate.

Additional companies will take part in the initiative to train AI to learn and remember things, a DARPA spokesperson told VentureBeat in an email; however, a full list was not provided by the time this story was published.

SRI International’s lifelong learning work will focus on training AI to imitate human memory recall, especially how to decide what information is worth remembering and what information should be discarded. Part of this will be explored through the emulation of the human brain when dreaming.

“We actually in our work try to base some on the biological mechanisms in sleep. So, when we sleep, we recall certain memories we play back in terms of dreams, and the dreams in a way reinforce it or we decide at that point it no longer jives with all the other things that we’ve learned. So it’s a biological mechanism that we are leveraging on, and now we are thinking on the AI side, how would you recall memory in a way that reinforces what we learned?” project director Sek Chai told VentureBeat in an interview.

SRI plans to carry out its research and training by playing Starcraft, a game that has been used to train a number of AI systems including game-playing agents from Google’s DeepMind. DeepMind is also familiar with AI training methods inspired by human biology. Earlier this week DeepMind shared how its emulating the impact of dopamine on human learning and decision making.

“There’s a lot of case scenarios and ways we can interject surprises into the system and let it play, let’s say, for days to kind of curate enough a ‘lifelong event,'” Chai said. “So surprises could be maybe an enemy unit or a unit that you see and suddenly have different behaviors. How would you adjust if the terrain changes? Let’s say a fog of war kind of thing — how would an AI agent adapt when it hasn’t seen this kind of behavior before?”

Once the training is complete, SRI may attempt to transfer that knowledge to robots to carry out tasks like the kinds they did while playing Starcraft, such as crossing a bridge or gathering in swarms.

“We may transfer some of that work into robotics, meaning that now that you have a system trained, can we transfer it into some sort of simple robotics systems, maybe in a swarming kind of configuration, and say, ‘OK, can it now do similar kind of behavior that it’s learned?'” he said.