Microsoft today unveiled its latest vision for a mixed reality (MR) world with the launch of SharePoint Spaces, a feature that allows companies to create immersive worlds for viewing data and documents within SharePoint.

The reveal was made on-stage by Microsoft’s corporate vice president Jeff Teper, who was speaking at the SharePoint Conference North America, held in Las Vegas on May 21-23, 2018.

SharePoint, for the uninitiated, is an intranet-like suite of storage, collaboration, and content management tools for businesses. Microsoft revealed that 400,000 organizations now use SharePoint, roughly 100 percent up on the same period last year.

Microsoft has been investing heavily in various mixed reality technologies and programs, and at its annual Build developers event this month, the company unveiled two new mixed reality apps for its HoloLens headset, specifically for firstline workers. Now, Microsoft is looking to mainstream mixed reality in the workplace via SharePoint.

With SharePoint Spaces, SharePoint users can create and view mixed reality spaces through any device or browser. So rather than having to rely on a traditional screen with mouse and keyboard inputs, users can slip on a headset to visualize information, with support from motion controllers, and interact with content from multiple angles. It won’t require headsets, however, as it will be viewable through a standard web interface on desktop computers and mobile phones. 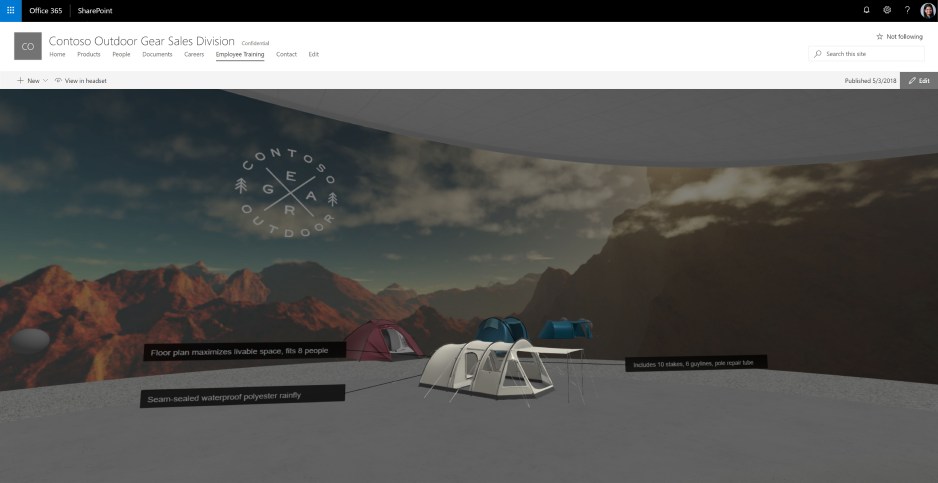 Microsoft cited a number of example use cases for SharePoint Spaces, including employee inductions whereby new staff can watch 360-degree videos or familiarize themselves with their campus from their desk, or development teams could demonstrate 3D product prototypes with funky annotations. 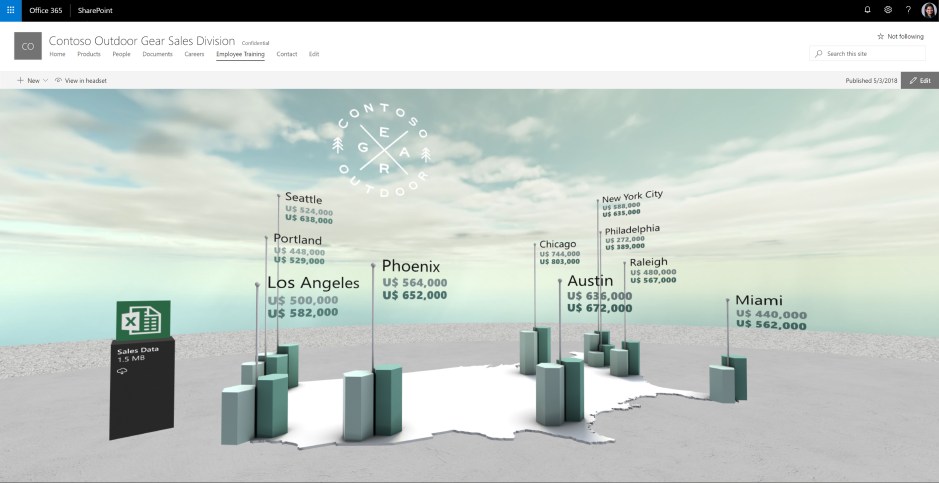 SharePoint Spaces has been built to solve a similar pain point: Building customized mixed reality experiences can be costly and complex, but now teams have access to a simple point-and-click interface that includes templates for creating such environments. Users can add files and documents to these worlds, which SharePoint transforms into 3D visualizations. “With SharePoint spaces, you can empower people to interact with objects that might be too numerous, too large, or too dynamic to experience in the real world or in a two-dimensional environment,” Microsoft said.

SharePoint Spaces will come as standard as part of Office 365 commercial subscriptions, and customers can apply to join an early access program from today.

Microsoft made a bunch of related announcements today too. The SharePoint mobile app now sports a Find tab for “personalized, intelligent” search, serving access to apps, resources, and expertise, including links to sites and documents that you’ve previously worked on.

And a “new files experience” in its enterprise collaboration platform Microsoft Teams ushers in greater support for the SharePoint document library.

Elsewhere, Microsoft also announced a new scan button to the OneDrive mobile app for capturing photos, business cards, whiteboards, and anything else from the real world you want saved to the cloud. Interestingly, this feature also “looks” inside the content of images to extract text, and object recognition makes searching for images later with keywords a lot easier. A new “personalized” feature in Office.com also uses AI to highlight files in the recommended section that may be of most import to you.

Finally, the company revealed that SharePoint Server 2019 will launch as a public preview later this summer.