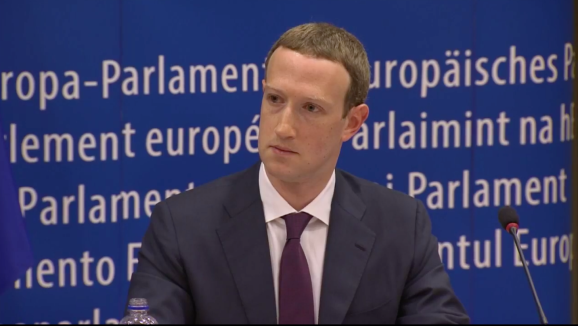 Today, Facebook CEO Mark Zuckerberg met with members of the European Parliament for approximately an hour and a half. The meeting, originally set to take place in private, was livestreamed after some members of parliament objected.

Though many of the questions asked were similar in spirit to those asked by members of Congress last month, the format was slightly different. Instead of each member individually questioning Zuckerberg, members asked all of their questions first, then Zuckerberg tried to answer all of them. That meant that members of parliament spent roughly 50 minutes asking questions, while Zuckerberg spent roughly 30 minutes answering them.

This allowed Zuckerberg to gloss over specifics of some of the thornier questions, and instead gave answers to what he deemed to be the “high-level areas of each.” He touched generally on Facebook’s efforts to stem the spread of inappropriate content, fake news, election interference, what kind of taxes Facebook pays in Europe, and the company’s thoughts on regulation, before asking if there were any questions he missed.

Syed Kamall, a British member of European parliament, answered that Zuckerberg hadn’t touched on his question about so-called shadow profiles — that is, what kind of data Facebook collects on people who don’t use Facebook and if the company uses it to create profiles of people who aren’t on the platform.

Zuckerberg’s answer made for one of the most revealing exchanges of the hearing. You can watch the exchange here at around the hour-and-twenty minute mark:

Zuckerberg: To your question, for the content that websites and apps send to us, we think it’s very important that people have the ability to clear this. So we just launched, or just announced that we’re building and will soon launch, this clear history feature that allows you to clear all basic browsing history data. To your point about earlier around how do we separate out the security data — it’s very important that we don’t have people who aren’t Facebook users coming to our service and trying to scrape the public data that’s available. So one of the ways that we do that is, you know people use our service, and — even if they’re not signed in, we need to understand how they’re using the service, [in order] to prevent bad activity. And that’s a big theme of today — has been around making sure that we can do a better job of governing the system, keeping bad content out. One of the ways we do that is by understanding how people are using the system.

Kamall: But if you’re not a Facebook user, how do you stop that data being transferred?

Zuckerberg: On the security side, we think it’s important to keep it to protect people in our community. Were there any other themes that we wanted to get through?

And that was the end of it. In summary: Facebook wants to keep the narrative on the idea that the data it collects on non-users is important to keep people from creating fake accounts or scraping data from the platform. But the company won’t give a straight answer on just what kind of data it collects on non-users, and how non-users can find out what kind of data the company is collecting on them.

During his testimony in front of the U.S. House Energy and Commerce Committee, Zuckerberg claimed he wasn’t familiar with the term “shadow profiles.” Even if Facebook says it’s not creating shadow profiles, there are examples of people who have said Facebook has somehow ended up with data that they never gave the company. For example, in 2013, the company disclosed that a bug had exposed email addresses and phone numbers of 6 million of its users. Some users discovered that the email addresses and phone numbers exposed were ones they claimed to have never given Facebook.