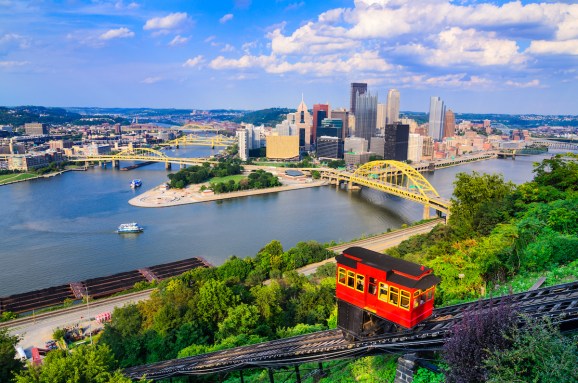 Pittsburgh’s robotics and artificial intelligence sectors are gaining more attention than ever before, thanks to continued interest from tech giants like Facebook and Google, which opened offices there, as well as local university Carnegie Mellon’s recent announcement that it will be offering the nation’s first undergraduate degree in artificial intelligence. But startups in the area still face the same challenges as startups in almost every other place outside of Silicon Valley: how to find investors who will invest in them, without the condition that they have to move to Silicon Valley.

According to an Innovation Works press release, there are currently more than 70 robotics and AI companies in southwestern Pennsylvania.

Innovation Works didn’t share the full list of venture capital firms participating in the event, but said that roughly 85 percent of them were from outside of Pittsburgh. Notable participating firms include Eniac Ventures, which closed a $100 million fund for robotics startups last year; Chicago-based Hyde Park Venture Partners; and TDF Ventures, an early-stage VC fund with offices in Washington, D.C. and Silicon Valley.

“Historically, we have tended to draw a lot of capital into Pittsburgh from what I would call that corridor from Washington, D.C., Baltimore, Philadelphia, New York, Boston, and then through the Midwest,” Innovation Works CEO Rich Lunak said in a phone interview with VentureBeat.

Innovation Works, which has been active since 1999, has made about 300 seed investments in startups, both through a seed fund and through accelerator programs like AlphaLab and AlphaLab Gear, for software and manufacturing startups respectively. Lunak says that while he used to have to give out-of-town investors a “Pittsburgh 101” briefing when they came to town for the first time, most investors he’s met with in recent years are already familiar with what Pittsburgh has to offer. According to Lunak, Innovation Works has identified 20 out-of-town venture capital firms that made their first investment in a Pittsburgh startup last year.

Lunak was bullish in speaking with VentureBeat about what it’s like for Pittsburgh startups raising venture capital in the city. He acknowledged that the city could use more capital, but said that “there’s a bit of an imbalance between entrepreneurs seeking capital and investors looking to deploy it in almost every region.” Between 2012 and 2016, just 39 venture capital deals were led by venture capitalists in Pittsburgh, according to the Pittsburgh Post-Gazette. Even though Pittsburgh is a smaller metro region than, say, San Francisco, Boston, or New York, that’s still a low number.

VentureBeat also spoke with executives at three startups who would be pitching at the event — 3D modeling startup Kaarta, warehouse robotics startup IAM Robotics, and Adrich, a startup that uses AI to affix what it calls “intelligent packing” to products. All three said that they have been encouraged to move to the West Coast at some point by investors, but that it’s never made sense for them to leave Pittsburgh.

“We’re a part of Plug and Play, which is out in Silicon Valley. … We had a lot of proposals of ‘if you move out here we will give you an investment,’ but we have turned all of them down because it just does not make sense and we don’t want to be there,” Adrich’s chief marketing officer Janelle Aslam told VentureBeat. “We’re looking for those investors who do value what we bring to the table in terms of our innovation in the space as well as our location.”

According to Innovation Works, Pittsburgh startups raised more than $687 million from investors in 2017, the highest in a decade.