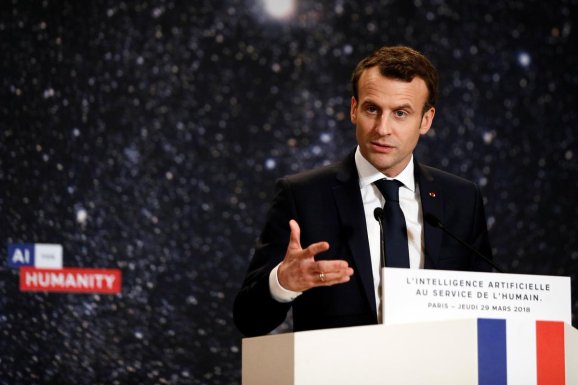 IBM today announced it would create 1,800 new jobs in France as part of a wide-ranging set of initiatives that include training programs for “new collar” jobs.

The disclosure was made at a summit called “Tech for Good” hosted by French president Emmanuel Macron, who has tried to position the country as a fast-moving, tech-friendly haven during his first year in office. In addition to IBM, the event drew notable CEOs from Uber, Microsoft, Facebook, and Google, many of whom will be speaking at the Viva Technology conference that kicks off Thursday in Paris.

Since the beginning of this year, Macron has notched up announcements of additional investments in the country from Google’s DeepMind, Facebook, and Samsung, among others.

Today it was IBM’s turn. The company said the 1,800 jobs would be in areas such as AI, blockchain, cloud computing, and IoT. This includes 400 artificial intelligence jobs that were announced in April as Macron’s administration released an AI for Humanity initiative that aims to make France an AI hub and to also influence the development of AI along more ethical guidelines.

“President Macron is making a big bet, and a smart one, that AI is going to transform every job, every profession, and every industry,” said IBM CEO Ginni Rometty, in a statement. “At IBM, we share this belief and see evidence of it every day, with Watson driving exponential impact here in France and around the world. That is why we are bringing 1,800 new jobs to France to meet growing demand for AI from our clients.”

The company intends to place some of the jobs in regional centers in Lille and Strasbourg.

These jobs fall into the category IBM refers to as “new collar” jobs, new roles in rapidly advancing areas of technology, from AI to cybersecurity to data science.

To train workers for these jobs, IBM also announced it would partner with the French government to expand the company’s P-TECH (Pathways to Technology Early College High School) education model. P-TECH was launched in 2011 to give training in these advanced fields to young people from disadvantaged backgrounds.

In the next school year, P-TECH will be in 120 schools working with 75,000 students to offer them mentoring, internships, visits to companies, and other tools designed to encourage them to pursue an education in these fields.

Finally, the company said it is creating the IBM France Academy in Paris to provide AI training for IBM employees, as well as clients and partners.