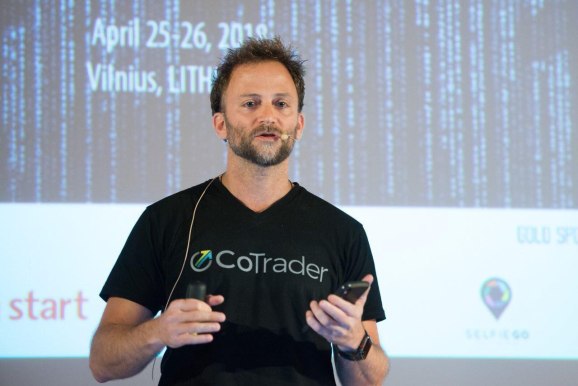 Social trading platforms aren’t new, but they are few and far between. The idea is simple — to alleviate pressure, new investors can copy the actions of successful traders.

A blockchain trading platform, CoTrader has a lofty goal: to disrupt investment funds and become the world’s largest outlet for all assets. CoTrader has a patent pending on technology it built to allow investors to copy the investments of successful traders while maintaining direct control.

So what makes this platform different from trading systems that already allow social trading?

“Unlike eToro and prior platforms, CoTrader is a transparent and empowering blockchain technology that does away with the opacity and lack of control of the old, traditional investment funds industry,” CoTrader founder and CEO Gary Bernstein told me. “As a ‘cotrader’, you never have to give away control of the assets that you want someone to invest for you.”

That’s an interesting alternative to the current crop of social trading platforms. How does it work?

“Assets stay in your own control, in ‘smart funds’, which are cotraders’ custom smart contracts on the blockchain,” Bernstein said. “In CoTrader, only you, the depositor, can ever withdraw your own funds. Fund managers can only trade the assets on your behalf, but not withdraw them into their own wallets.”

The platform works using smart funds — smart contracts on the Ethereum blockchain that are programmed to allow only the investors to pull assets back out of them. Once they’re deposited, the fund manager can only trade the assets on the CoTrader Super-DEX, which combines multiple decentralized exchanges, such as Bancor, Kyber, and 0x.

By using the blockchain, CoTrader has a distributed ledger of activity, which helps ensure security as well as transparency.

“Cotraders have proof of performance of fund managers, because manager trades are done on the blockchain, where there is a record of them for all to see,” Bernstein said. “As such, the CoTrader protocol proves the past ROI performance of fund managers. While this past performance is not always indicative of future performance (no one can know the future for certain), top performing fund managers — with diverse and long trading histories and other potential indicators of likely future success in fund management — might be expected to do better than others in the future, on average. And therefore other cotraders might do best, on average, to copy them.”

Interestingly, CoTrader allows this activity on its platform without asking fund managers to reveal details of their trades.

“Although the trades on CoTrader’s platform are all open on the blockchain, CoTrader’s patent-pending technology enables the fund managers to hide their details of their trades while still proving their performance — and while cotraders continue to cotrade with them,” Bernstein said. “This seems impossible — how can you work with someone, have proof of results of the actions, yet not know what those actions or trades are exactly? This is achieved with CoTrader’s patent-pending cryptographic algorithms. This ability to hide trading strategy details, at least in the short term, is important to incentivize the top-performing fund managers to continue to use the platform, and continue to help cotraders.”

CoTrader is currently live on the testnet with support for Ethereum ERC20 tokens and ICOs. Its crowdsale is planned to begin in June.

The roadmap will see CoTrader launch in the mainnet by August 2018. The company plans to expand support for all cryptocurrencies, ICOs, stocks, shorts, derivatives, and all tradable assets in 2019.