Some Twitter users say that the service is erroneously reporting them as being too young to use the social network, and that it is taking them days to get their accounts unlocked.

Since last week, users have been complaining on Reddit about being locked out of their accounts and have been trying to figure out what might be causing the issue. Redditors believe that Twitter users are being locked out of their account if they created the account when they were under 13 years old — which has traditionally been how old users need to be to use Twitter. VentureBeat couldn’t independently verify all of those claims, but found some commonalities in speaking with Redditors about what happened to their accounts.

VentureBeat messaged four Twitter users who had reported being locked out of their account. All said that they were locked out of their accounts in recent days after trying to change their birth years or being prompted to add their birthday to their profile. Three said that they originally entered incorrect dates of birth when they signed up for Twitter because they were younger than 13 years old. Another claimed that when they were older than 13 when they signed up for a Twitter account, but put their birth date as one year older than they actually were because Twitter wouldn’t let them input their actual birth year.

Above: A screenshot of a message one user reported receiving from Twitter

Social media platforms have traditionally been lax about enforcing their minimum age requirements, with some executives believing that forcing users to prove their age would raise a number of privacy concerns. Simply entering a false date of birth has historically been one way for Twitter users who are younger than 13 to sign up for the platform.

What’s unclear is why these accounts are being locked now. The uptick in the number of users reporting being locked out of their accounts for age-related reasons does coincide with the rollout of the European Union’s new data privacy regulations, called GDPR. Of the users VentureBeat spoke with, one was located in France, two in the U.K., one in Malaysia, and one in the United States. GDPR allows EU member countries to set their own “digital age of consent” — the age at which users can sign up for a service that processes their data without parental consent — between 13 and 16 years old.

All users VentureBeat spoke with say that they are now older than 13 years old and, in some cases, have had their accounts for five to seven years. That means that if the user were indeed still under 13, they would have signed up for a Twitter account at 5 or 7 years old.

Some Redditors are reporting that in order to get their account back, Twitter is asking them to prove that they are older than 13 by providing a picture of a government-issued ID card or contact information for a parent or guardian. Some users are saying that even after providing pictures of their IDs, they are still receiving messages from Twitter that the platform can’t verify their age, and that their accounts are still locked days after receiving the first message from Twitter. Others are reporting that they don’t want to provide Twitter with a picture of their ID because of privacy concerns, or that they’ve had to provide pictures of both ID and birth certificates.

VentureBeat asked Twitter for more information on what the company looks for to determine if a user is older than 13 years old, and what exactly users need to do to appeal a decision that they’re too young to use the service. As of publish time, we have not received comment, but will update this story if we do.

Update, May 30: After publication, VentureBeat was contacted by Rob Ford, the founder of FWA, a U.K.-based company, who said that FWA’s Twitter account had also been suspended after he changed the “birthday” on the company’s Twitter account. This is the first indication that Twitter is also locking out business accounts after the administrator changes the birth date of the account.

Like other users, Ford says that he got a message from Twitter stating that the company had determined he was “under the age of consent” in his country. Twelve hours after being locked out, Ford says that he is still locked out, and uploaded a copy of his passport in an attempt to verify his identity with Twitter.

“I wasn’t happy about [it], but I kind of feel I have no options,” Ford told VentureBeat.

Additionally, Ford said that he changed the account’s birthday after being sent an email by Twitter prompting him to do so (screenshot below). Ford said that he initially listed FWA’s “birthday” as May 5, 1996, but tried to change it to May 5, 2000 — the day FWA was actually founded. 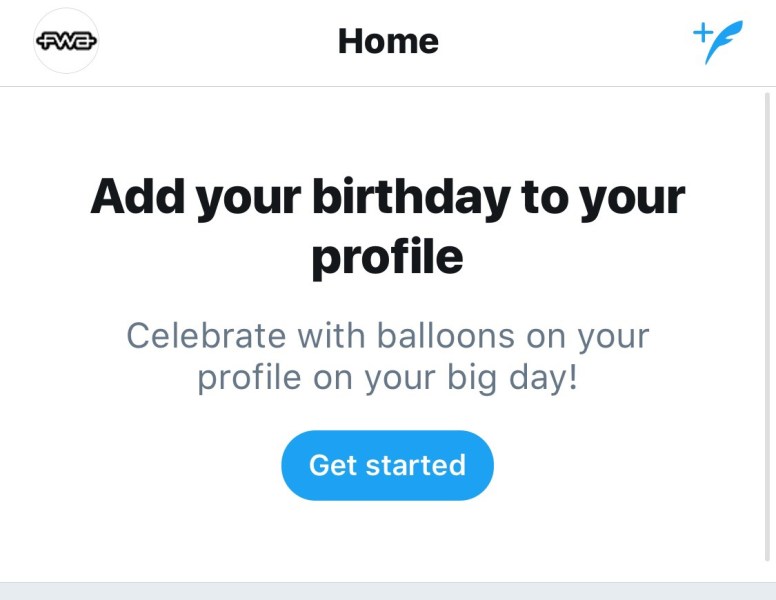