Continuing an eight-year tradition, Apple today unveiled the latest version of iOS for iPhones, iPads, and the iPod touch during its WWDC keynote. In addition to featuring a collection of tweaked apps — notably including Messages with new Memojis and Animojis — iOS 12 is a performance update, fine-tuning the operating system’s underpinnings after a seemingly endless year of notable bugs and security problems. It also includes grouped notifications, as well as other features designed to reduce user distractions and limit your screen time. 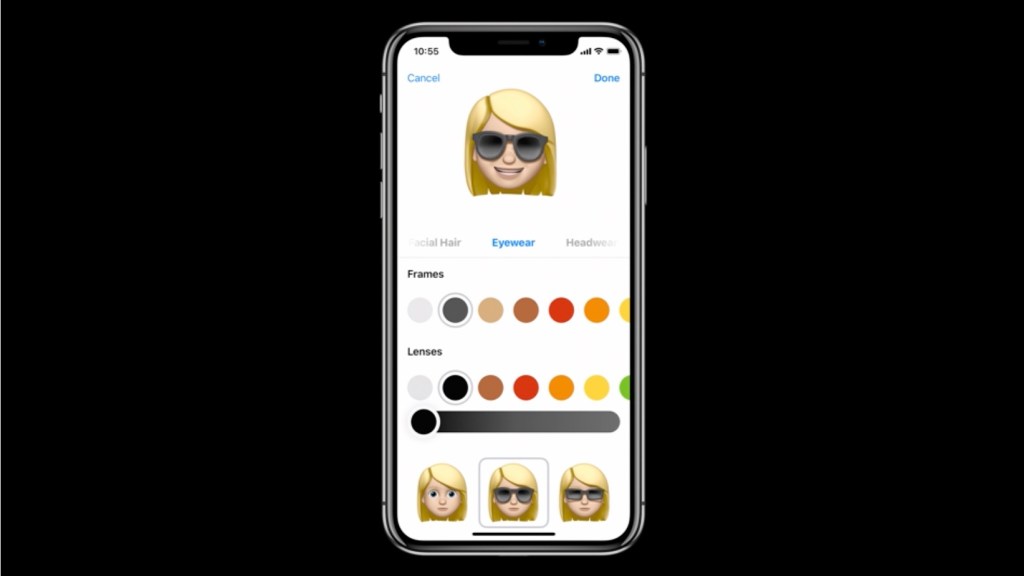 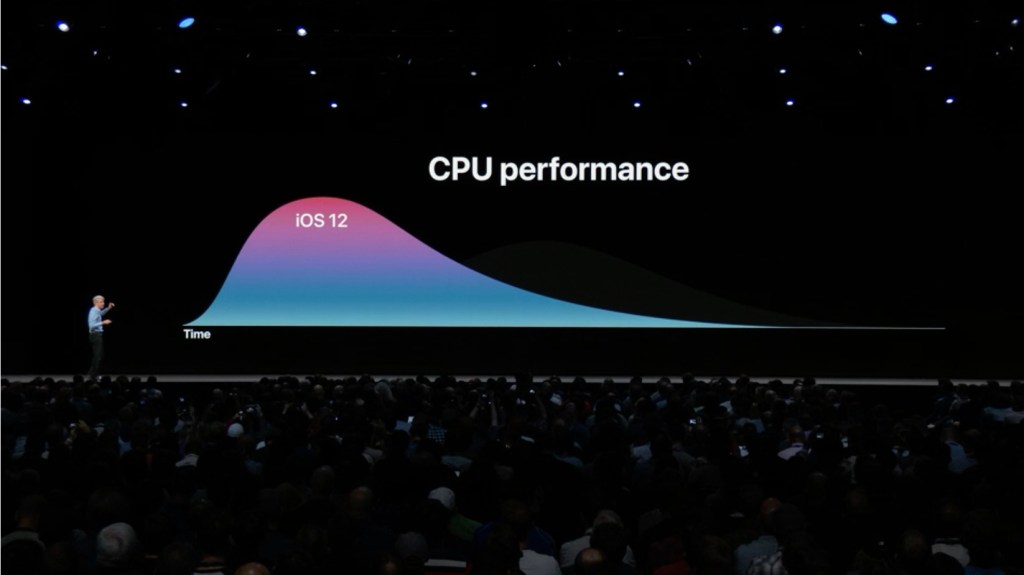 In addition to updating ARKit to version 2, Apple also developed a new file format for augmented reality, called USDZ, which works across the web and multiple apps to display realistic AR objects at their correct sizes. It is supported by Adobe, Autodesk, Quixel, Pixar, PTC, and Sketchfab. A new Apple-developed AR app called Measure has been developed to take advantage of AR to measure objects in the real world, letting you make measurements and use an accurate level. Measure is actually included in iOS 12, rather than requiring a separate download from the App Store. 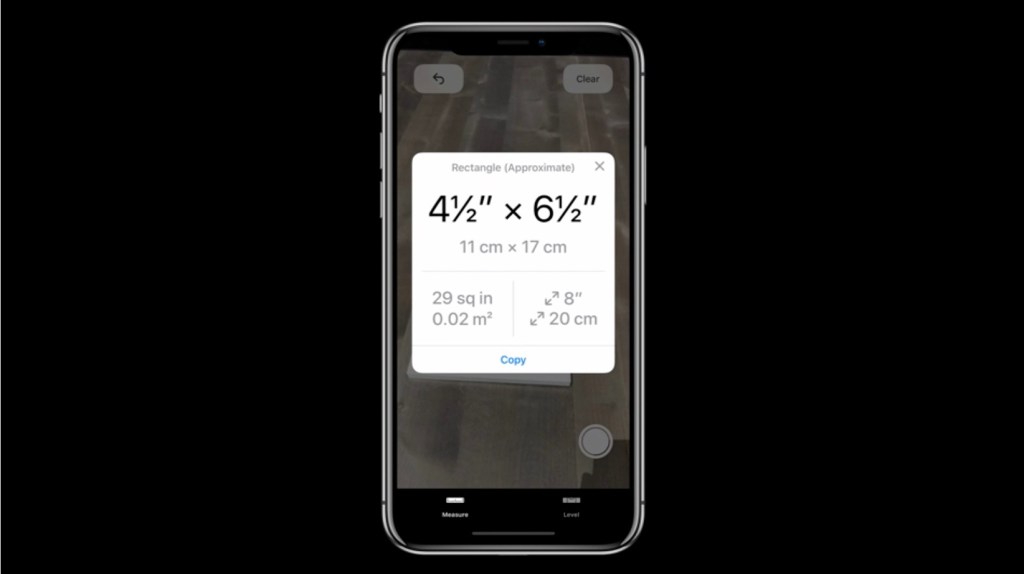 An extended demonstration of ARKit 2 running a Lego game showed a small Lego set growing into a large digital tabletop set that’s fully interactive, including the ability to see what’s happening inside buildings and use moving vehicles. As expected, multiple people can collaborate together within a single ARKit scene. 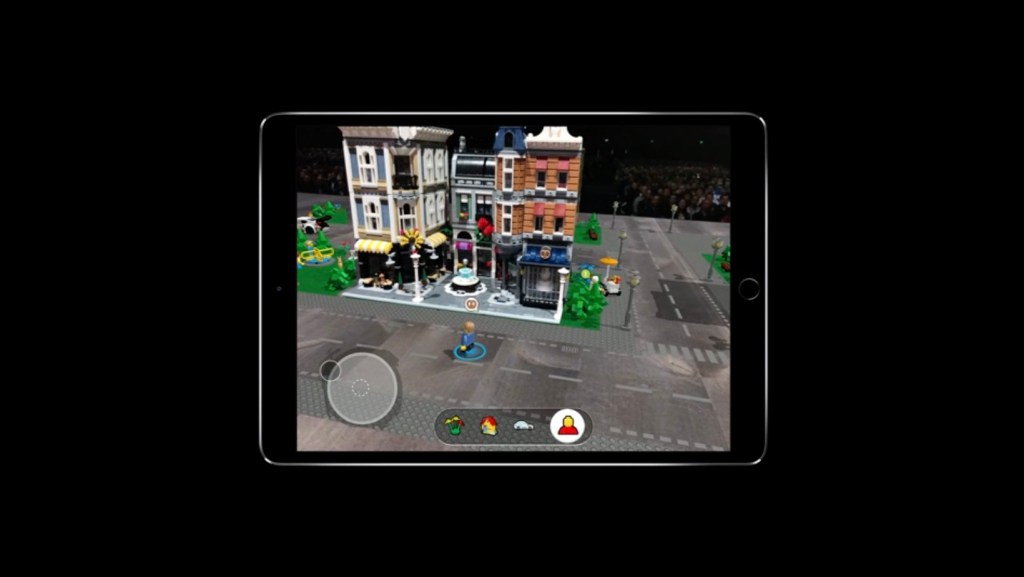 The iOS Photos app is being upgraded with Google Photos-style search features, including search suggestions that automatically highlight people, places, and categories of photos. It also is adding a common database of public events that can be shared, along with suggestions that can predict whom you might want to share with directly from your library. 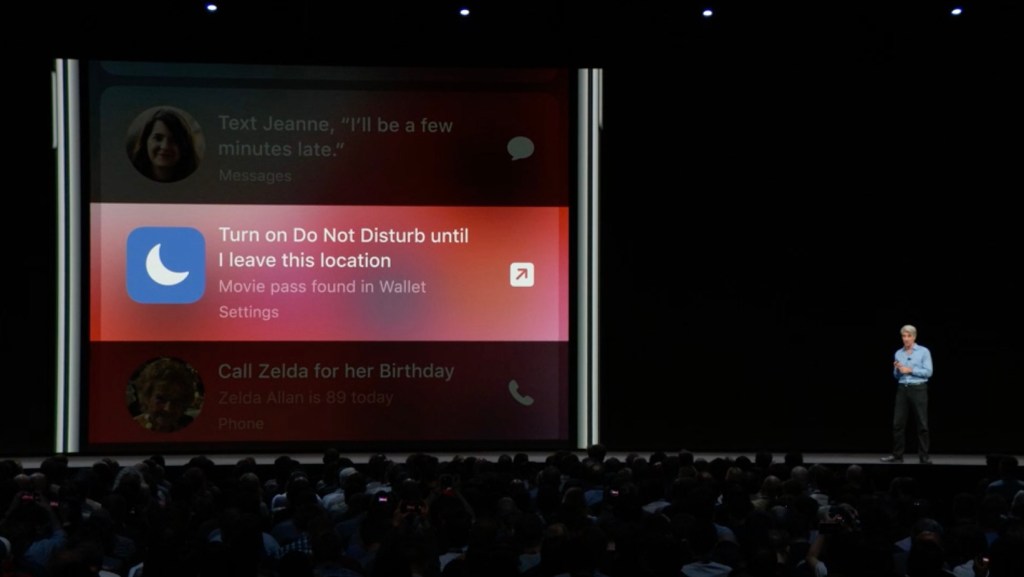 Siri is being updated with Shortcuts, letting any app expose quick actions to Siri — so you can create your own phrase that automatically triggers Siri to use a specific feature of an app. Shortcuts can be added to your lock screen for easy access, and Siri can prompt you with a shortcut at a certain time of day based on prior experiences. A new Shortcuts app, seemingly built upon the Workflow app Apple acquired, will let you manage and edit the new features. Shortcuts work across iOS, HomePod, and Apple Watch. 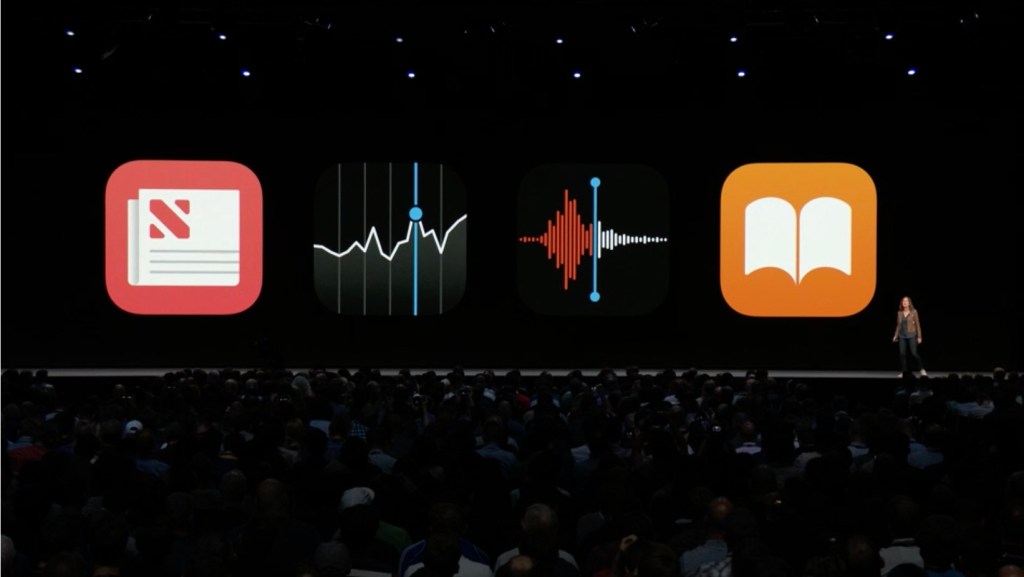 Apple is also updating Apple News, Books, Voice Memos, and Stocks for iOS 12. A sidebar has been added to News on iPad to make browsing easier. Stocks — which hasn’t been significantly updated since the original release of iPhone OS — now adds Apple News integration, after-hours pricing, and support for the iPad. 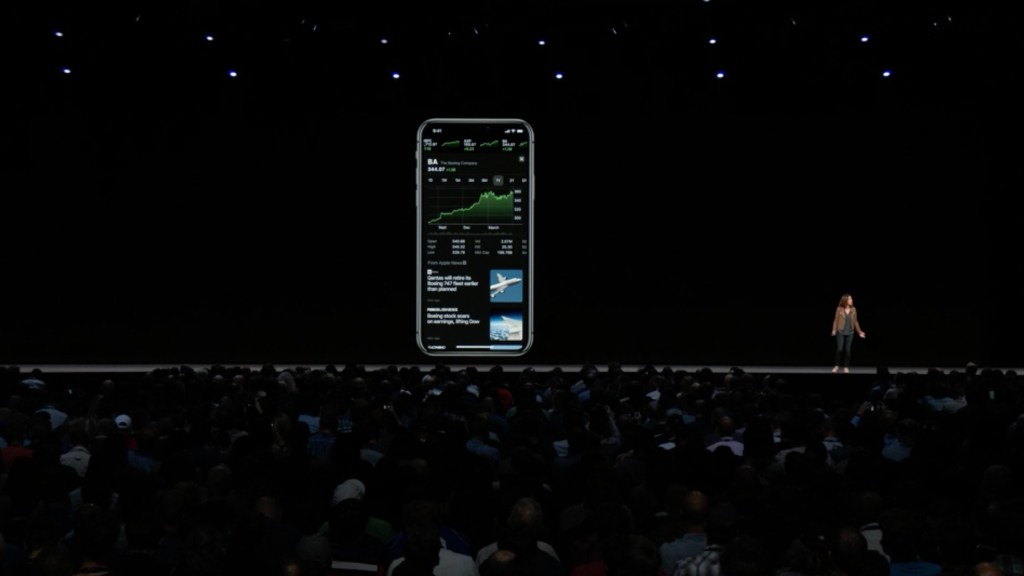 Voice Memos is coming to the iPad for the first time, as well. iBooks is getting renamed Apple Books and receiving an all-new design with a new bookstore that looks like the iOS App Store. Additionally, CarPlay is getting updated to support third-party apps. 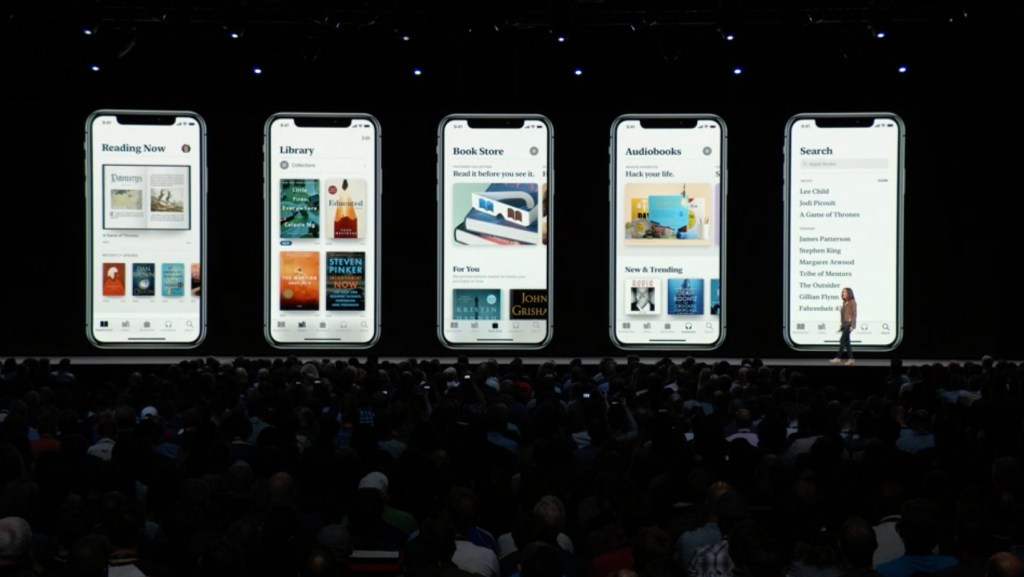 As part of a digital health initiative, Apple is adding activity reports for parents and kids, plus App Limits to help you set limits on specific apps, pop up reminders when time is almost up, and allocate allowances of device usage. 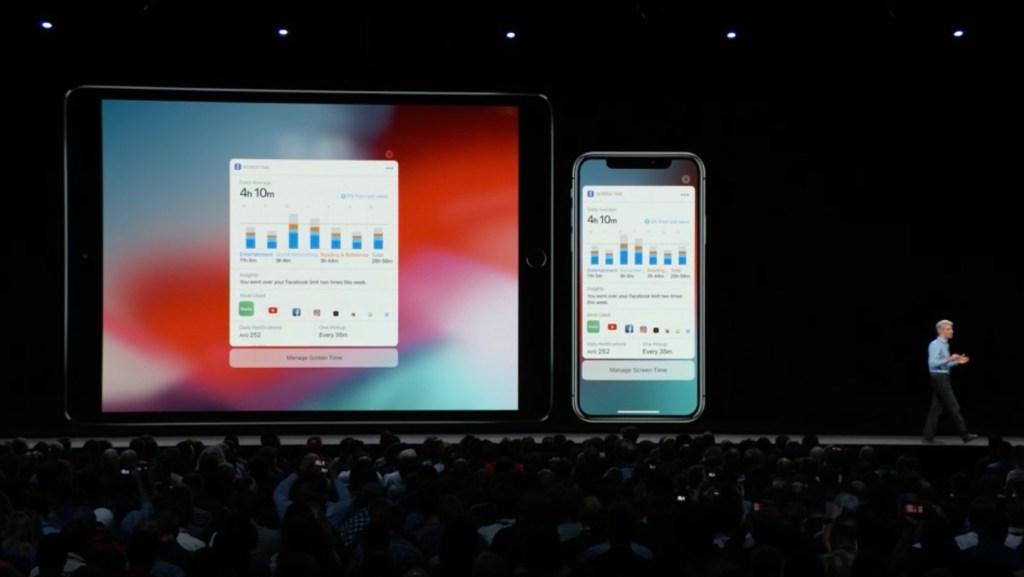 Originally, there were 12 Animojis, with an additional 4 added in iOS 11.3 earlier this year. Now there are 16, thanks to Ghost, Tiger, Koala, and T-Rex. Tongue detection has been added, too, as has a feature to enable you to create human animoji based on the characteristics you prefer. Support for the feature remains limited for now to the iPhone X, but additional devices with TrueDepth cameras are expected to be unveiled in September, expanding the feature’s value. 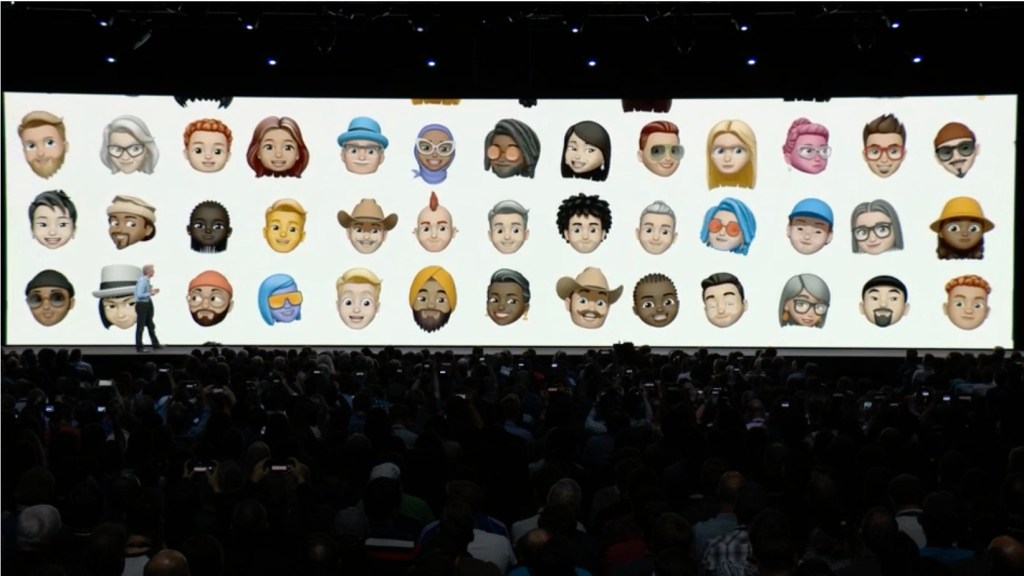 Messages is also adding Snapchat-style integrated artistic filters, effects, and Animojis or Memojis into messages, enabling photos to be send with composite, cartoony imagery without loading a third-party app. Additionally, FaceTime will support up to 32 people (!) in group chats, which is being called Group FaceTime — and integrated into the Messages app. The feature was a noteworthy omission from FaceTime given that the Mac app iChat AV included 4-person video chats and 10-person audio chats starting in 2004.

But Apple’s decision was understandable: FaceTime initially launched on smaller-screened, less powerful, and more bandwidth-constrained iOS devices. Group FaceTime makes use of the screen by automatically enlarging squares as people speak, and shrinking passive others to the bottom of the screen. The new Messages visual features can be used in FaceTime, as well. 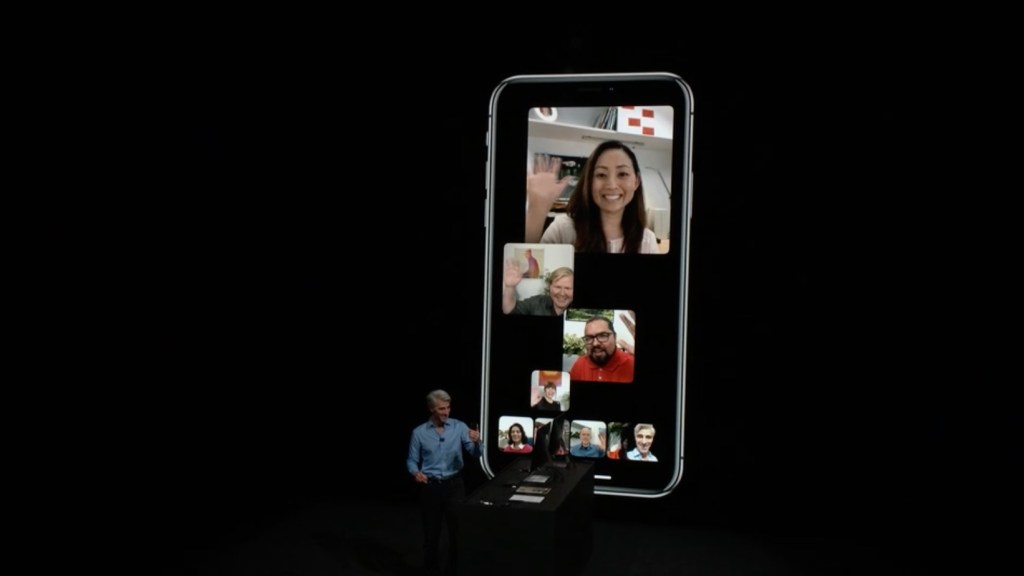 Above: Group Facetime on iOS 12.

The initial beta version of iOS 12 will become available for developers later today, with a public beta most likely following a day to two weeks thereafter. Users considering installing the beta should make sure to have a current backup of existing iOS device contents ready just in case there’s a need to roll back to iOS 11. Early iOS betas sometimes suffer from crash bugs and battery issues, as well as incompatibility with major apps.