At a press event in New York City today, France’s Parrot announced the Anafi, a new drone with a 4K high dynamic range (HDR) camera. Anafi is available for preorder today starting at $700 and ships on July 1.

The Anafi, which Parrot says was two years in the making, focuses on four core pillars: image quality, flight performance, foldability, and ease of use.

The diminutive drone weighs just 0.7 pounds and is 25 percent quieter than its predecessor, the Bebop 2, thanks to a carbon fiber filled with hollow glass microbeads. Its arms fold and unfurl in less than three seconds, and even the controller is designed for portability — unfolding in around a second.

On the image quality front, the new drone doesn’t disappoint. The aforementioned 4K HDR camera has a 21MP Sony IMX230 sensor with optics “specifically designed” for the Anafi. It’s able to withstand extreme temperatures (14 degrees to 104 degrees Fahrenheit), can shoot up to 30 frames per second in 4K at 100Mbps, and has a lossless zoom of 1.4x, 3x digital zoom in 4K, and 2.8x in Full HD (1080p). Highlights include a hyper-lapse shooting mode that speeds footage up to 240 times, and a high frame rate mode of 60 frames per second.

The camera is mounted on a 3-axis gimbal that’s both mechanically and digitally stabilized and is able to tilt up to 90 degrees vertically.

On the performance side of the equation, the Anafi comes through once again. Parrot’s FreeFlight 6 app boasts two manual control modes, both with adjustable rotation, incline, and camera tilt settings: Film and Sport. In Sport mode, the drone can hit speeds of up to 32 miles per hour and withstand wind speeds up to 33 miles per hour.

A a polymer lithium battery at the heart of the Anafi delivers up to 25 minutes of flight time. The drone continuously self-monitors charge time and has a chemistry-protecting hibernation mode that allows it to quickly return to take-off position. An integrated charger with a USB-C port supports fast charging — Parrot says it takes about an hour and a half for Anafi to reach full capacity. 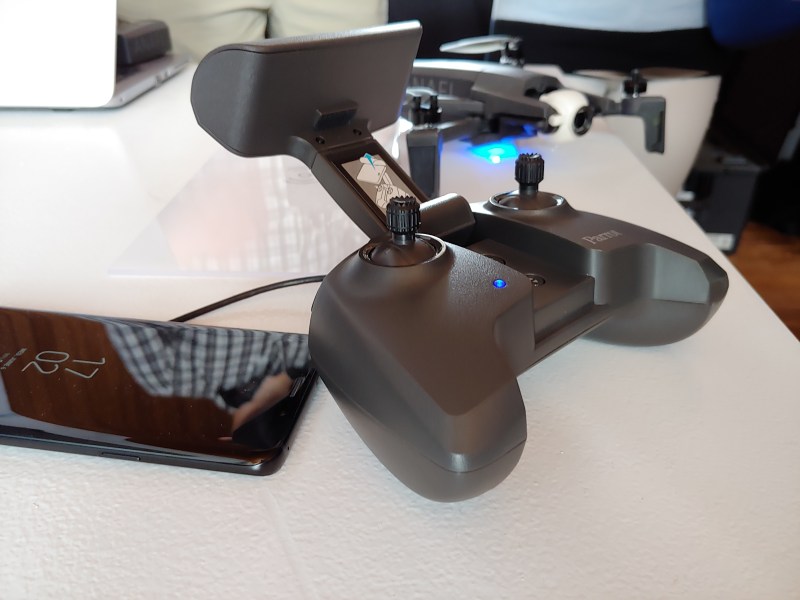 The Anafi’s dual-band, four-antenna Wi-Fi chip supports 2.4GHz and 5GHz bands, which connect to Parrot’s Skycontroller 3, with a range of up to 2.48 miles. A microcontroller constantly monitors nearby Wi-Fi signals in order to switch to another channel when one becomes too crowded.

Last, but not least, Parrot’s companion app features all-new modes that “adapt to all users.” Beginners have access to automatic control settings, such as Smart Dronies and CineShots, and advanced users can select or customize camera settings. There are three modes to choose from: Smart Dronies, Cameraman mode, and Follow me, which uses a neural network to lock onto a subject on the ground.

The app conveniently syncs with the Skycontroller 3 remote, which connects to an Android or iOS phone via USB-A. Setting changes on the app reflect on the remote, and vice versa.

The Anafi, it seems clear, is Parrot’s answer to DJI’s top-of-the-line offering, and HDR on a drone is a first. We’ll have to see how it performs in practice, but from the spec sheet, the Anafi is competitive out of the gate.