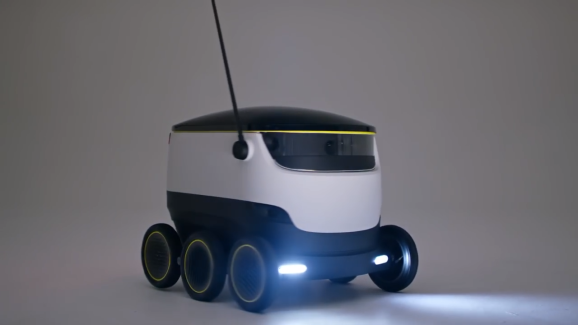 Starship Technologies today announced the closure of a $25 million funding round to expand and deploy its fleet of robots designed to carry out deliveries. Starship previously committed to putting 1,000 robots in circulation by the end of the year.

About a month ago, Starship announced the launch of an automated delivery service for corporate and university campuses. The company also wants to get into providing deliveries for local businesses like packages, groceries, or food deliveries.

Starship’s delivery robots are able to make deliveries within a two-mile radius and can work autonomously or, when necessary, be moved by a human driver. The robots, which tend to travel on sidewalks, can go up to 10 mph but have been limited to 4 mph thus far, a company spokesperson told VentureBeat in an email.

While some companies seek to tackle the challenge of creating autonomous vehicles for roads, another set of companies is using AI to explore use cases for vehicles meant to improve human mobility or carry out tasks, and Starship is among the most advanced of its cohort.

Competitors include Marble, who began delivery trials with Yelp’s Eat24 in San Francisco last year and closed a $10 million funding round in April. Beijing-based ForwardX, which just raised $10 million for its autonomous suitcases that follow you, is also working on delivery robots.

Since launch, Starship’s roving robots have covered over 100,000 miles around the world in 20 countries, encountering more than 15 million people along the way.

Starship also announced today the appointment of Lex Bayer as CEO. Bayer takes over the helm from Ahti Heinla, a Skype cofounder who created Starfield with Janus Friis in July 2014. Bayer joins Starship Technologies from Airbnb, where he led the business development and payment divisions of the company since he joined in 2014.

The company wooed Bayer because the founders wanted to bring in a proven leader who can help lead Starship through its next stage of growth, a company spokesperson told VentureBeat in an email.

Starship Technologies was founded in July 2014 and to date has raised $42 million, following a $17 million round in 2015. The company has 200 employees with offices in San Francisco, Hamburg, London, Washington D.C., and Tallinn, Estonia.