Chinese electronics company TCL today announced the BlackBerry Key2, priced at $649 USD, $829 CAD, €649, and £579. The Key2 is the first BlackBerry smartphone to include a dual-rear camera and a new feature called Speed Key, a customizable shortcut key for accessing apps, contacts, and functions at any time.

TCL did not share an exact launch date. All we know is the BlackBerry Key2 will start to arrive later this month in select markets and will roll out globally next month. We’ll keep you posted as we learn specifics. Francois Mahieu, BlackBerry’s chief commercial officer, shared the following slide at an event in New York City: 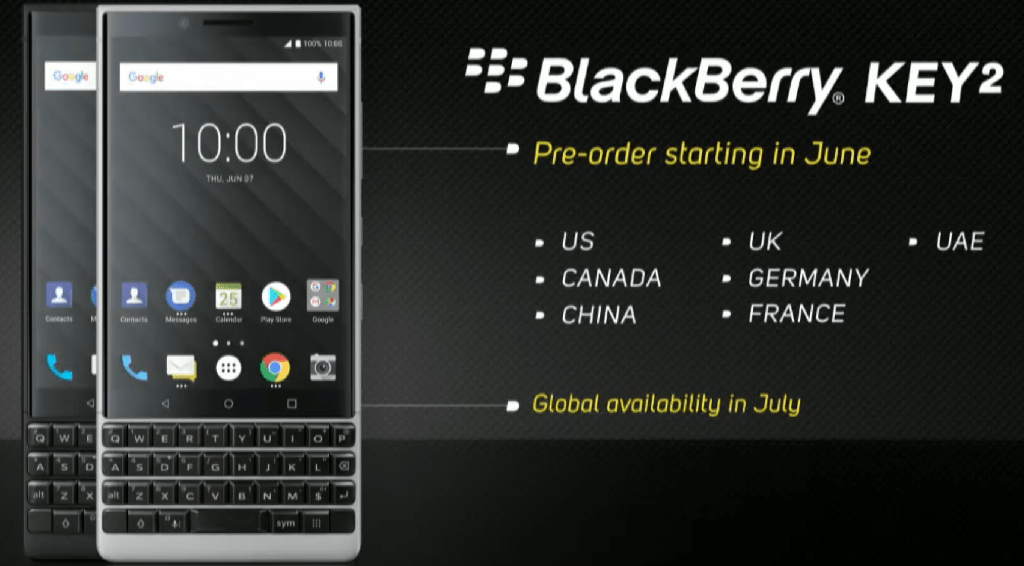 This is the latest BlackBerry smartphone released by TCL under a brand licensing agreement with the Canadian company that was signed in December 2016. The BlackBerry Key2 succeeds the BlackBerry KeyOne, also made by TCL, and, yes, both companies realized it would probably be a good idea to stop spelling out the number. How many more of these the duo will make is anyone’s guess.

As we’ve learned to expect, the phone features a physical keyboard (fingerprint sensor is still in the space bar, it’s now backlit, and key height has been increased by 20 percent), Android 8.1 Oreo (the KeyOne was the first BlackBerry Android phone to run the latest version, and the Key2 is keeping up with that trend), Google apps, the Play Store, and monthly security updates, plus BlackBerry’s additional security, privacy, and productivity tools. New this time around is that the device ships with Firefox Focus, which Mozilla incidentally updated with cookie management and autocomplete improvements just a couple of weeks ago.

Like its predecessor, the BlackBerry Key2 features an aluminum frame, a textured back, and a 4.5-inch display (1620×1080 resolution, 434 PPI, and 3:2 aspect ratio). My colleague Evan Blass leaked all the specs yesterday:

So, a quick rundown. The phone is powered by a Qualcomm Snapdragon 660 processor, 64GB of storage (double that of its predecessor, and a 128GB variant will also be available) with a microSD slot, 6GB of RAM (doubled), and a 3500 mAh battery (same). TCL is promising up to two days battery life (unchanged) and a new Smart Battery Experience feature that learns from your daily charging habits to make recommendations for when you should charge your phone to make it through the day.

Dual cameras, new apps, better security, improved privacy, and all that jazz are nice. But the unique feature is the Speed Key, situated in the bottom right-hand corner of the keyboard.

Just hold the Speed Key and any of your customizable 52 shortcut keys to access a frequently used app, call a favorite contact, or anything else you might want to do.

“Although there are many different smartphones for consumers to choose from today, most tend to offer very similar experiences without much distinction from one to the next,” TCL senior vice president Alain Lejeune said in a statement. “With the introduction of BlackBerry Key2, we’ve created a distinct smartphone that captures all the traits that have made BlackBerry smartphones iconic, while introducing new innovations and experiences that not only make this one of the best devices for security and privacy, but also the most advanced BlackBerry smartphone ever.”

In other words, the message is the same as last year. If you want a hardware keyboard, or just yearn for the good old days of owning a BlackBerry, TCL has you covered. But it will cost you $100 more than last year.