Google is beginning the rollout process for its recently announced “high-priority” notifications feature in its Gmail mobile app. The new AI-powered smarts will be landing first in the Gmail iOS app, followed shortly by the Android incarnation.

As part of the broader Gmail redesign news several months back, Google revealed that a number of new features would soon be coming to the Gmail mobile app. Among those were high-priority notifications, which were made available in the company’s other email app, Inbox, last year.

The feature is basically trying to fix the perennial problem of alert overload. Most smartphone users will know this problem well, with countless push notifications arriving on their device from the likes of WhatsApp, Netflix, Facebook, Twitter, Gmail, and other services. Google is trying to address things from its side by using machine learning and AI to figure out which emails you likely want to be informed about, saving the others for when you open the Gmail app.

In the coming days, you’ll start seeing this alert at the top of your inbox, asking if you wish to activate the feature — “turn on” is pre-highlighted in blue, which suggests that Google wants you to use the feature. 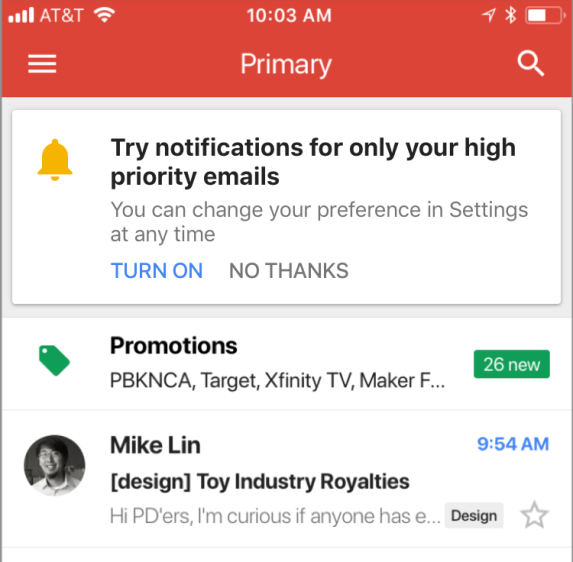 This represents one of a number of features that have started life in the standalone Inbox app before making their way to the flagship Gmail app. In a briefing with VentureBeat in April, Gmail product manager Jacob Bank explained the rationale behind doing it this way.

“We’ve learned over the years that changing Gmail is really, really hard — lots of people rely on it to run their lives, so we don’t want to make changes frivolously or things with a lot of risk,” Bank said. “And so Inbox allows us to test things out with a more forgiving population before bringing them to all of Gmail. And we are intent to continue doing so in the future.”

So Inbox is effectively Gmail for early adopters. And now notification overload will be a little less of an issue for Gmail users, too.